In a year where the phrase ‘new normal’ became part of our daily vocabulary in ways never before imagined, India set parameters for the new normal in India’s transport sector

The government has set ambitious targets to achieve its goals of zero emissions, one of which includes phasing out of petrol-run vehicles and replacing them with electric ones by 30% by the onset of next decade. To put things in perspective, the United States has earmarked half of its total vehicle sales to be EV by 2030. Neighbour China, on the other hand, has a target of 40%.

Notably, these countries began their journey to electric mobility long before India. To achieve such high numbers, India has to be at par with these countries in terms of not just manufacturing but also adoption.

But in a country with over 1.3 billion population, it has been proven time and again that demands of India vastly contradict those of the West. Then why are we still following the same global formula while heralding the clean mobility millennium in the subcontinent? 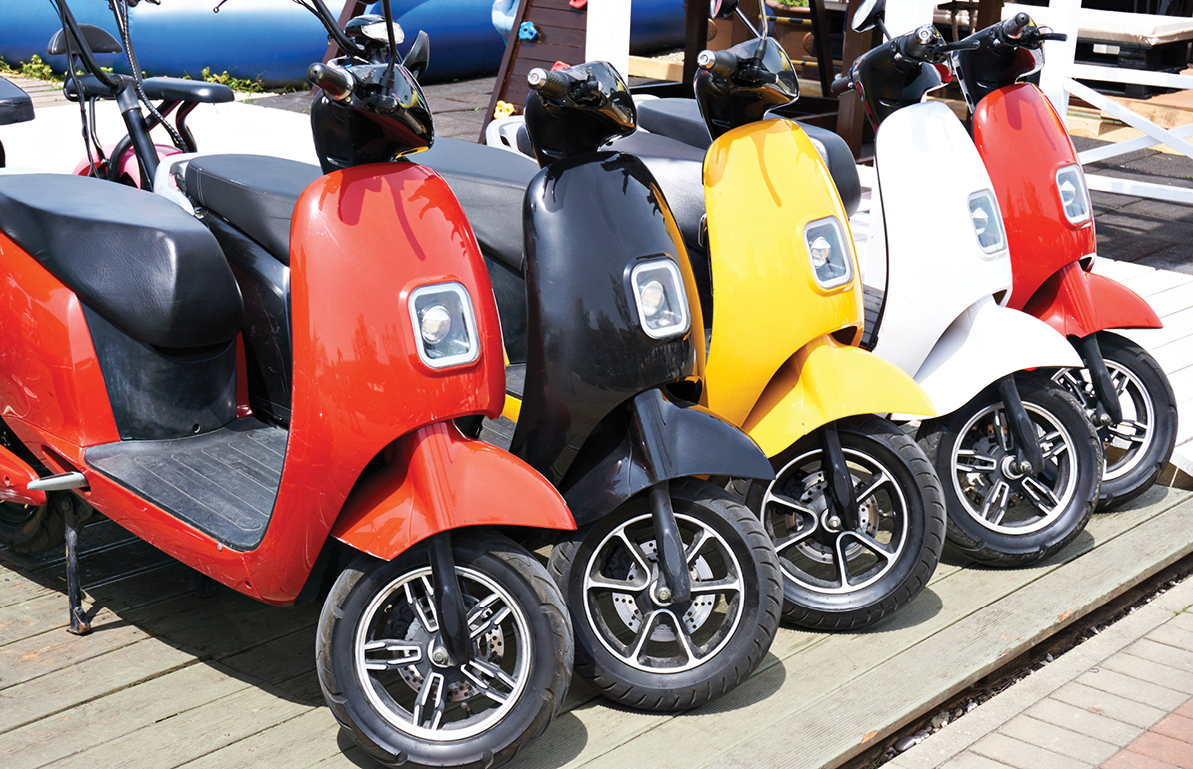 Look away from the electric 4-wheeler

The roads, climate conditions, traffic management, and even the way owners handle their vehicles in India are incomparable to the developed nations, which have set similar goals like India’s but seem far more doable.

That is not to say that Indian OEMs have lagged behind in the race. The automobile industry has always been a game that the Indian businesses have been able to massively cash in on. So, it is evident that interested parties who have recognised the inevitably of the shift to electric mobility would expect to rake similar points here as well.

As per a report by the World Economic Forum (WEF), India made up only 0.5% of the global EV market in 2018. The numbers need to increase massively to meet the expectations of the behemoth target of 30% EVs in the country, and for that OEMs have to put in the work.

The world has been watching closely the developments in the space and already has big players, in the form of renowned OEMs, working in the field to help them get a head start. To beat them, India needs to build the same level of expertise and resourcefulness. For that, it needs to choose the target segment wisely.

Here’s the catch. While most countries have focused on the 4-wheeler segment, the 2-wheeler segment in EV market has been left virtually untouched. Experts have concluded that the 2- and 3-wheeler segments are where India can capitalise on.

The 2-wheeler market, which has been a thriving market in the Indian automobile industry pre-EVs, is still just as much of a business opportunity, if not more. In fact, market reports suggest that 50% of India’s EV goals would be met by 2-wheelers.

Interestingly, there is no one company that has taken the biggest piece of the pie yet. Yes, there are OEMs that are steadily treading the route to become a force to reckon with, but it still keeps a lot of space for newer participation.

Over the past couple of months, various Indian OEMs have invested heavily in increasing their production capacity, some even going as far as creating the world’s largest factories. But is manufacturing the one-stop solution to our woes? There are aspects of the ecosystem that need to grow at the same pace in order to keep up with the manufacturing boom.

For starters, charging infrastructure, or the lack thereof, is currently seen as the biggest hurdle to EV adoption. Similarly, a lack of servicing support also raises doubts in the minds of consumers. Businesses need to come up with models that can eliminate these hurdles.

The various permutations and combinations of possible businesses in the EV industry know no end. It is pretty evident that the EV industry is in its infancy in India, which is precisely the perfect time to set up shop in this burgeoning sector. Be it in charging, or servicing, or support, or financing, companies can leverage any aspect of the ecosystem and emerge victorious, as long as they solve a problem.

The introduction of electric mobility is going to need some convincing to make the entire country discard their ICE vehicles for electric models, what with range anxiety and the price disparity.

The brand identity of OEMs is just as crucial of a deciding factor when converting previous ICE vehicle owners to EV owners. Brands and OEMs that have been around for a long time and have had a considerably good repo with customers definitely have an advantage over newer startups, and this is where they have to break the ice. Forming a brand identity that can convince the skeptical customer to take the plunge is going to be the biggest hurdle.

Put the tech talent to work

India has another aspect in its favour: its vast technical know-how. There is, of course, no doubt that India churns out some of the world’s brightest tech minds and, in order to make electric mobility in India become a class-apart, it is imperative that we put these bright minds to work. We must come up with innovations that can rightly balance the design and electronics part of building highly efficient electric vehicles that are suitable for the unprecedented nature of India’s automobile industry.

The EV industry is bound to be a tech-driven industry. The fundamental groundwork of what makes it a league apart from its predecessors is the very role of technology in bringing about new innovations to the sector. Design and electronics must go hand in hand. This is not a phase where we can distinguish between the two anymore. The vehicles can be transformed from what they are traditionally known to do and serve different yet specific needs of each customer in this diverse country.

The pain points of the average Indian vehicle-owner are many, which have been effectively recognised by some who have begun resolving them, whether it is through IoT-enabled vehicles or some other technology, giving meaning to the phrase ‘Necessity is the mother of invention.’ It is only a matter of time, until another necessity of the Indian customer gives birth to an invention that can resolve the pain of customers around the globe. As such, the role of tech startups becomes much more significant in heralding the new wave.

India for the world

The introduction of electric vehicles is seen as quite a coming-of-age moment for the automobile sector. This is possibly one of the first times when mobility seems both non-threatening to the environment and with multiple new possibilities of innovation. And as we know, Indians have a knack for innovation.

The EV industry is a huge opportunity for success, and while multinational companies look at India as a huge market for consumption, it has the potential to turn into a provider for the rest of the world.

Deviating from the path that we took during the onset of the first automobile revolution of the country, this is possibly the time when we focus on creating vehicles that cater to the Indian market first and then take them on to the global front instead of the other way round. As the saying goes, ‘Charity begins at home.’ Similarly, the success of EV players eyeing to take on as a global player relies on how well they can serve the domestic market.

We are seeing the emergence of different brands that cater to particularly Tier 2 and Tier 3 cities, while some target urban markets in Tier 1 cities. While some focus on low-speed vehicles, some provide high-speed options. These offerings are not just useful for boosting the Indian EV market but also similar markets in Africa, South America, and South Asia.

Moreover, it is recommended for Indian companies to turn their gaze from glamorous markets in the West and instead focus on smaller markets where they have a much bigger competitive advantage to make a bigger impact.

Manufacturing vs adoption: The tougher nut to crack

Manufacturing is an issue that has been promptly handled by the government by providing subsidies and incentives. But adoption tricks have not yielded the desired results. The Faster Adoption and Manufacturing of Electric Vehicles in India Scheme Phase 1 (FAME-I) failed to achieve its targets despite the government spending over eight billion (800 crore) rupees on it. The subsequent Phase 2 of the scheme has also so far not come close to achieving the targets set, despite a deadline extension.

The production linked incentive (PLI) for the manufacturing of the lithium-ion batteries also acknowledges only one part of the problem. And while many like to put the issue of rising fuel prices to be a contributing factor to push consumers to switch, it seldom is so easy to completely transform the public consuming habits.

We all know that the EV phase in the country has only just begun. The seed of innovation is sprouting in the industry where many OEMs want to grab a share of the pie, but in their own unique ways. This is the beauty of any nascent market—the sheer number of possibilities. Business models can take any shape and form, be it manufacturing, support, supply chain, or recycling.

India’s EV industry has all the required ingredients to mimic the proven success it attained in the automotive industry decades ago. But one thing is certain, the space must harbour an ecosystem of collaboration and cooperation, which needs to start at the grassroots level.

This article is based on the session ‘Transition To Total Electric: Opportunities & Challenges’ by Ashish Kumar, Founder and CEO of Amosta Solutions, which was presented at the November edition of Tech World Congress 2021, and has been prepared by Siddha Dhar, Business Journalist at EFY.