About 75-80 per cent of the rural India is untouched, offering a huge opportunity for sales of economical and user-friendly inverters and UPS -- Uma Gupta 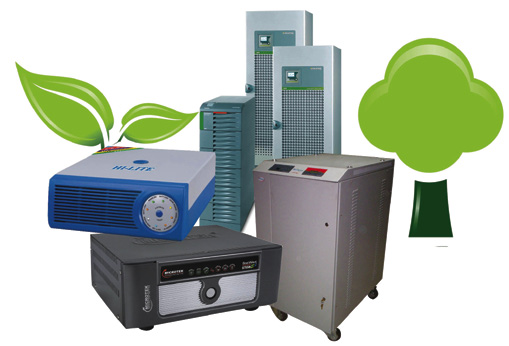 Given the frequent and long hours of power cuts, inverters are a necessity in India.

According to Frost and Sullivan, the Indian power inverter market was worth about Rs 20-22 billion in 2010-11, in terms of revenue. The market is projected to grow at a double-digit rate during the next three to four years. This is likely to be the result of a steady demand from the domestic, small-office home-office, small and medium enterprises (SMEs), commercial, industrial and other sectors.

The power backup market has also witnessed the entry of many branded suppliers of UPS—a similar product category.

Inverters for homes
The demand for power inverters is expected to be robust from the rural and semi-urban areas due to power cuts and load shedding.

“Inverters have reached every part of the country but not every household as yet, as 70 per cent population of our country lives in villages. Now almost all villages have electricity but the supply is highly erratic. Hence for regular and extended supply of electricity, rural population is going in for inverters in their homes. Hence the demand is still huge and shifting from urban areas to rural areas,” says Sanjeev Garg, executive director, PEP Infotech.

Further, as electricity becomes properly available in all villages, rural population will become habitual of electronic appliances. So even during short power cuts, inverters will be demanded by individuals, which will increase the demand further.

“Emergence of new players in the industry itself is an indication that there is much more requirement to fulfl. Untapped markets like rural and semi-urban areas have a big potential in the next couple of years. Also, urban areas still have good potential as the demand versus supply gap for electricity will increase in the coming years. Considering power shortage in India and limited quality players, it will be at least 2020-25 by when one can even start thinking of saturation,” says Kunwer Sachdev, founder and managing director, Su-Kam Power Systems.

Amongst other demand drivers, “there is a huge demand, and also a surge, because of the replacement market, where an older UPS can be replaced with the manufacturer’s buyback plan,” informs Amitansu Satpathy, director-marketing, BPE India.

However, there are some factors responsible for fluctuation in demand.“The demand is decreasing due to better electricity distribution networks, increased electricity availability and frequent season changes. This year shortened spans of summer heat could be blamed for the lower demand,” reasons Yogesh Dua, partner, upsIN-VERTER.com.

Inverters for offices
In many offices, inverters are catching up as an alternative backup power solution for non-critical applications such as emergency lighting and to run non-life supporting equipment in clinics and hospitals. High-capacity inverters are also used to operate lifts, air-conditioners, air coolers, elevators and even telecom applications. In small offices,these are used to operate EPABXs, phones, fax machines, laboratory equipment, etc.

Inverters are cleaner than DG sets as they do not produce smoke. As some of the features are almost like UPS systems, they can be used in the SOHO and SMB sector as prime power backup devices.

[stextbox id=”info” caption=”Inverters and UPS: What’s the difference”]UPS and inverter terms are used interchangeably. A UPS (uninterruptible power supply) is just a system that allows instant switchover to the power backup source in the event of a power failure. Home UPS are inverters with built-in UPS featuring over- and under-voltage protection which can be used to run computers too along with other electronic appliances so that the PC is not affected by wide voltage fluctuations. Also, the PC doesn’t reboot as changeover time from mains to battery is fast.[/stextbox]

Home segment: assemblers at a disadvantage
Inverters are an integral part of our daily life. These are used all the time but purchased only once in a few years. A non-standard product can cause bigger losses to the user than the cost of the inverter system itself. With a poor-quality power-backup system, the user also runs the risk of damage to his costly home appliances. In fact, non-standard and locally assembled inverter can be risky for use at home.