“Manufacturers have been designing and making products that suit their customers well, by not just optimising lighting levels that can be achieved through customisation of colour temperatures, CRI, lux levels and the axis but also providing optimal light distribution by using specialised optical lenses,” say Sinha and Tyagi.

“But while customising products, the manufacturer should always keep quality as the priority, as in this competitive market, manufacturers end up using inferior-quality components that not only hamper the efficient operation of the product but also adversely impact the expected life of LEDs,” adds Jindal.

According to Gurinder Singh Lali, founder, Nano Power, “Electronic ballasts are also responsible for better lamp performance, extending life and improving colour characteristics. Luminaires are selected for their lighting effectiveness, and these products are manufactured and customised as per specifications provided by the buyers, which include many factors like input power supply (AC/DC), lumens output (high/low), total wattage, angles of light output, and specifications of size and shape.”

Technological changes and innovations
An LED lighting product is a combination of electronic design (LEDs), electrical design (LED drivers), mechanical design (cooling devices) and optical design (lamp holders), and innovations have been taking place in all these components. In the last two years, the performance of high-power LEDs has improved drastically, with greatly improved light output (flux),efficacy (lumens per watt), colour quality and stability.

“Today, commercial LEDs emit 110-120 lumens/watt and, recently, the Bilkent University in Turkey has claimed to have developed an LED with an output of 300 lumens/watts,” says Joneja.

Some of the improvements in the last few years have given LED technology a real boost—ceramic packages for better thermal management, increase in efficiency within a short time frame backed by chip technologies, long-life, high-brightness white LEDs with longer maintenance intervals and better total cost of ownership. “These improvements support fast and extensive adoption of LEDs for different applications,” opines Sood.

Jindal shares, “Innovations in commercial lighting are more focused on designing the components for maximum light with minimal wastage. As a result, the angles of light dispersion are important and therefore the fixing of lenses in the lights plays an important role. By using perfect lenses, the perfect spread of the light can be achieved.”

In commercial lighting, design of the lighting fixture should be according to IP standards. If the life of the LED is more than 50,000 hours or 100,000 hours, the standard of the fixture should also match that.

“Many inferior designs are available in the market where the life of the fixture cannot be expected to extend beyond three to four years. How can we then expect to protect the LEDs for about 15 years with these fixtures? At Olive, we take special care of this aspect and use a good-quality metal to match the heat-sink quality,” shares Jindal.

With drastic improvements in diffusers, secondary lens and reflector technology, it is now possible to achieve better-quality lighting with a good spread of light, without much wastage of energy or multiple shadows.

“Earlier, even though we had LEDs which could have been driven at up to 1 amp (3 watts), the lumen output was not effcient. But now with new-generation LEDs, the lumen output is much more. For example, even at 1 watt (350 mA) we get 130 lumens, or at 3 watts (1 amp) we get 300 lumens. This will help us to use fewer LEDs,” says Gururaja.

Sujana Energy uses an intelligent proximity module such as a motion sensor in its products. The sensor is sensitive to movement and can offer functionalities like auto-dimming and auto switch-on/off. The company also offers photosensitive LED billboard lighting, which is solar-based and has an inbuilt dimming and on/off mechanism.

“Chip-on-board (COB) is an emerging technology which allows for virtually limitless freedom in the use of PCBs and thus serves as the basis for totally unique LED solutions,” informs Ravi A.V.

COB technology is used for both small and high-power chips to give long life and high reliability to the product. In COB production process, LED chips are directly attached to the metal PCB substrate so that the heat generated at the p-n junction has a direct path for maximum heat dissipation.

“COB technology, though slightly expensive, is the best solution for temperature-sensitive devices such as LEDs, primarily due to its superior heat dissipation characteristics which result in cooler LED chips and a long life of up to 100,000 hours,” explains Rohtagi. 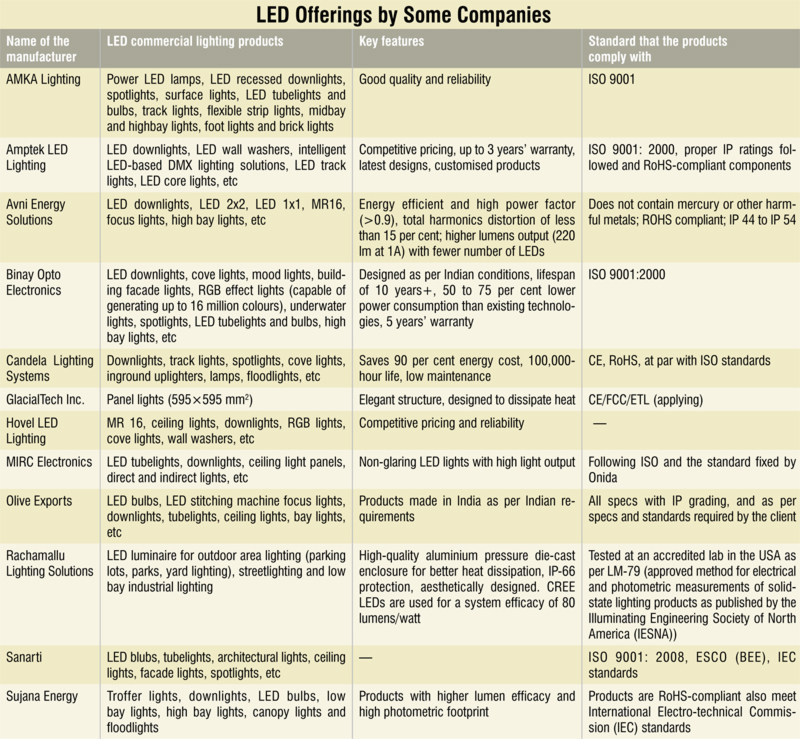 “Samsung’s 11W COB solution provides up to 118 lumens/watt at 5000K and 88-90 lumens/watt at 2700K. Thermals are adequately taken care of since the chip itself has a large contact area with the heat-sink. This is an excellent solution for bulbs, wall washers and floodlights,” says Pradeep G. Kamath, vice president, Spectra Innovations India—a distributor for Samsung LED components in the Indian market.

The author is executive editor for EFY’s Electronics Bazaar magazine