2D air-search radar. A 2D radar gives the two dimensions of the target’s position: range and bearing of the target. 2D radar AN/SPS-49 operates in L band (851MHz–942MHz) and can detect air targets at a range of 463km (250 nautical-miles).

It can scan up to an altitude of 46km. A two-cavity Klystron oscillator is behind its peak power of around 350kW. Due to the thinness of the beam produced, it becomes difficult for the enemy to jam it.

This radar can simultaneously track 255 targets. Since it is sitting on the ship, it is subjected to the pitch and roll of the ship. To overcome this, the antenna is gyro-stabilised. And because of this, even if the ship rolls to the side or pitches up or down due to the waves, this antenna stays where it was before the roll or pitch.

Through identify friend or foe (IFF) components organic to the radar, the targets’ friendliness is determined.

IFF shoots an ultra-short pulse-coded narrow beam of radar energy to the flying objects as a challenge. The friendly aircraft through an IFF receiver receives this and responds with a suitable reply. The radar receives this reply and classifies the flying objects as friendly aircraft. Now for the radar’s IFF challenge, if there is no proper reply from an aircraft, it is assumed to be a hostile aircraft, and its course is continuously tracked. All air-surveillance radars of the CSG have IFF.

3D air-surveillance radar. If a target of interest appears, 3D radar AN/SPS-48 takes over. A 3D radar provides the range and bearing like the 2D radar but also provides the height of the target, which is an extra dimension of the target’s position.

But 3D radar is a computer-controlled planar-array radar that varies its frequency instead of nodding the antenna up and down. By changing the frequency of the transmitted RF energy, this radar radiates a series of pencil beams. If the transmitted frequency is increased, the beam travels down the face of the antenna, and vice versa. The radar computer keeps track of the frequencies as these are transmitted and detects when the target reflects these. Further, it converts returned frequencies into meaningful altitude data. For finding the range and bearing, it simply rotates the antenna like a 2D radar.

Operating in the range of 2900MHz to 3100.5MHz (S band), a 3D radar can detect targets up to a range of 407km (220 nautical-miles) and heights up to 30km. It emits radar energy with a peak power of 2.2MW and an average power of 35kW. It has automatic detection and tracking capabilities to simultaneously detect and track multiple air targets. It also has a moving target indicating (MTI) capability, which helps distinguish between moving targets from stationary targets. Hills or a landmass produce radar echoes, which is landmass clutter. In the radar-signal-processing circuitry, echoes from stationary features are attenuated. The resultant echo is of the moving targets.

Radar AN/SPS-48 is electronically-stabilised instead of gyro-stabilised. To compensate for the pitch and roll of the ship, the frequency emitted is changed to compensate it. This is similar to the height-finding technique. 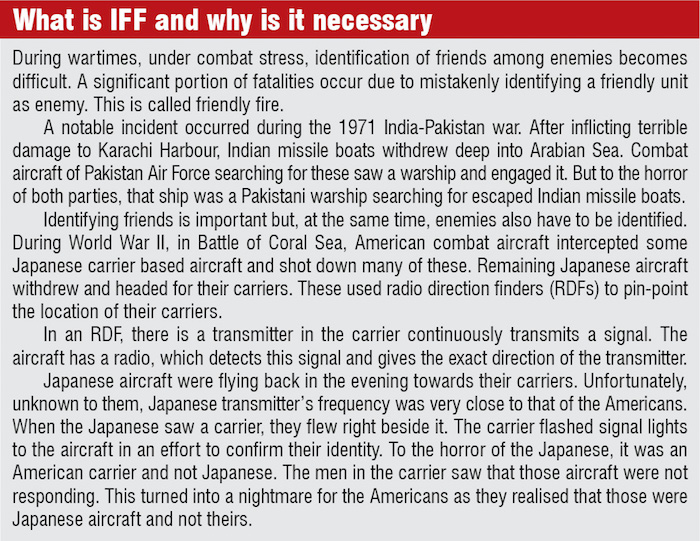 Using this tracking data, fighter aircraft can be scrambled towards incoming threat to intercept it. The carrier constantly updates the aircraft with the target’s location until interception, through datalinks.

Phase III and phase IV of air defence operations will be covered in next part of this article.