Later in October 2013, the development team of the OpenMDAO software framework (which serves as the backbone for subsystem integration, optimisation and workflow management) released a partially completed conceptual open source model of parts of the Hyperloop’s propulsion system. However, there were some hindrances and the model required tweaking.

In November 2013, MathWorks analysed the tweaking inputs and concluded that there was a high probability for that route to be possible. The analysis focused on the acceleration felt by passengers and the essential deviations from public roads in order to keep the accelerations within limits.

In January 2015, a paper based on the NASA OpenMDAO open source model emphasised again the need for a bigger-diameter tube and a lower cruise speed closer to Mach 0.85. It suggested doing away with the on-board heat exchangers based on thermal models of the interactions between the compressor cycle, tube and ambient environment. The fully integrated system model was constructed using OpenMDAO-a Python-based framework for design and optimisation of highly coupled systems. This work focused on the aerodynamics and thermodynamics of the passenger pod itself. OpenMDAO gave the means to manage growing model complexity in an efficient and flexible way.

The presented models were built exclusively using freely-available, open source tools. As the Hyperloop design evolved, more and more design parameters were required to be managed and optimised.

In 2015, an undergraduate Hyperloop team from the University of California (UCI) got together to compete in a chain of contests sponsored by SpaceX. UCI’s team, called HyperXite, won a technical excellence award in a design competition held in 2016, and the team had to actually build the thing in time for the January 2017 pod contest at SpaceX’s headquarters in Los Angeles.

This required a huge amount of computer modelling. Ars, a 24-core system owned by the University which limited students to 72 hours of time per project, was thought of as a facilitator. However, since HyperXite was sponsored by Microsoft (among others), the software giant led the undergraduates to a firm called Cycle Computing, which takes computing capacity from cloud services and provides its clients (which are often research teams and private firms) with software that allows them to carry out large-scale simulations in everything from risk modeling for life insurance disbursements to testing potential solar-cell materials. Cycle Computing supported the team in assembling a 128-core cluster on Microsoft Azure to maintain all the necessary data and compute workload.
For actual modeling, HyperXite deployed simulation software ANSYS running the Azure instances, wherein each had 16 Intel Xeon 2.4GHz cores and 7GB RAM per core. This massive computational power enabled the Hyperloop team to model the aerodynamics of the pod as well as the braking system. 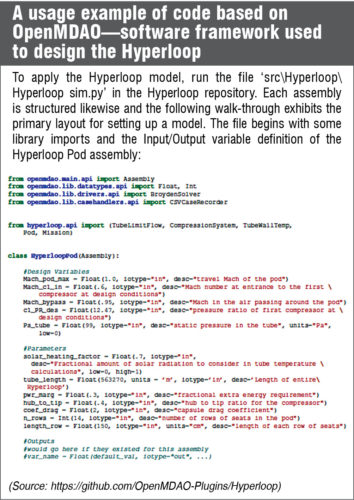 Once the design competition was over, the team concluded that the pod shape needed to be changed since the original design weighed too much. It was decided that carbon composites instead of aluminium would be used for pod shell. However, before constructing the first draft of this shell on a real pod, simulations were run to ensure that the structural integrity would not be jeopardised.

A major problem faced was that one change demanded more changes to be made. For example, changing the shell gave rise to the problem of some parts of the pod being too weak, thus making them very vulnerable to breaking upon the pod’s braking. It was only with the support of high computing capacity that the team was able to carry out iterations fast and take quick decisions-such as, which shell shapes were to be rejected. Access to the computational servers allowed larger and more accurate simulations, making it possible to complete several weeks of work in a few days.

The Indian government has been toying with the idea of building bullet trains in the country, which is very capital-intensive. For example, the proposed bullet train project between Ahmedabad and Mumbai is estimated to cost about one trillion rupees ($15 billion).

However, Hyperloop is emerging as a much cheaper and more effective alternative. It will provide paths to leapfrog Indian transportation by providing a faster, non-disruptive, pollution-free option to move both passengers and cargo. Hyperloop fits in well with the Mission 350 Plus Initiative declared by the Ministry of Railways in August 2016.

The Mumbai-Bengaluru-Chennai corridor with future plans to include Delhi, Hyderabad and Pune is on the anvil. The concept of Hyperloop Transport System will dramatically reduce the Mumbai-to-Delhi travel time to just 90 minutes. The tube line between Mumbai and Pune, a road distance of 150km, could be covered using the existing central median, supported by pylons separated by a distance of 30.5m (100 feet).