ArduLab
Created by Manu Sharma, co-founder of Infinity Aerospace, ArduLab is an ATmega2560-powered platform that enables NASA-approved experiments to be run inside the ISS. The result is a kit that is to space experiments what Arduino is to electronics experiments. It comes with all necessary features and interfaces to kick-start experimenting on the ISS. Atmel claims, on their website, that Ardulab has been used by both school students and NASA-JPL researchers for experimenting.

While it used to retail at more than Rs. 120,000 per kit, the good people at Infinity Aerospace later open sourced the entire project so that you can build it yourself. Their website ardulab.com has detailed plans that will help you to build the three main components of the system; the chassis, electronics and software (Ardulab OS). It also includes a kit that comes with some basic programs in Arduino Sketch File format (*.ino). Ino is a command line toolkit for working with Arduino hardware.

Now that you have all your space experiments set and ready, all you need to do is build a rocket to see how high you can get it.

Gravity development board
Designed to help reduce the cost of space-tolerant electronics, Blaze Sanders designed a board to withstand the harsh environments of space. Some claim this board to be a good alternative for Arduino Uno, which has been the other preferred prototyping environment. The gravity development board (GDB) started life as the high-power driver for Lunar Wombot, which its creator was working on for NASA. “We needed a small embedded system that could drive Firgelli L16 linear actuators and act as the control and communication system for the entire Lunar Wormbot,” he states in an article about the board.

Some of the challenges that face an electronic board designed for space include its ability to handle the vibrations of launch vehicles, heat distribution in a weightless atmosphere (convention does not work in space) and redundancies to prevent single-event upsets caused by radiation.

The GDB is designed for beginners and experts, and can be programmed in four languages, including
12-blocks GUI, SPIN, C and assembly.

Would you like to be RocketMan
Ever seen the movie RocketMan from 1997 where an engineer gets to ride a rocket to planet Mars? Well, you could start working for your chance at it too, by building some of these electronics projects designed to help control your rocketship.

Although they have a collection of open hardware and software designs available at their website, TeleMetrum and TeleMega are the ones at the top of the line. Powered by ST Micro’s STM32L151 ARM Cortex M3 based microcontroller (MCU), these both come with TI’s CC1120 RF transceivers, u-blox’s MAX-7Q GPS receivers and Freescale’s MMA6555 inertial sensor, among other components. These boards were designed using the open source gEDA (an open source electronic design automation tool) for schematic capture and PCB layout.

TeleMega is a version of TeleMetrum, which is designed for high-power rockets. Although it sounds like it uses an ATMega chip, it actually runs on ST Micro’s MCU. In addition to the features of TeleMetrum, TeleMega also makes it possible to configure pyro events with up to six pyro channels, and can be based on time and various flight events as well as status-like angles from vertical and more.

TeleMega firmware runs on an operating system called AltOS, which provides features like flight monitoring, post-flight analysis, device configuration and firmware updation. AltosUI, through which these features can be accessed, runs on Linux, Mac OS X and Windows as well.

Rocket Mega
Designed by OSAerospace to be a low-cost open source platform for development and experimentation in rocketry and other aerospace applications, the Rocket Mega project is based on Arduino hardware.

What it essentially contains is a Rocket Mega shield, code and an Eagle CAD library that contains custom parts and footprints. Complete details on how to build the board, including bill of materials and schematics are available at opensourceaerospace.com

The R1 version is a shield designed to work with Arduino Mega board. The R2 version comes with several improvements, yet still manages to keep the same price point in raw parts. Improvements include using MOSFETs rather than relays for controlling the pyro channels, apart from shifting to ceramic capacitors, improved routing and fewer individual parts.

Digi-Key website’s video library has a good video showing the system in action, where CC430 controls the current to the rocket ignition system by using an optically-isolated MOSFET. Another laptop-connected kit controls a servo that supports video equipment.

Autopilot
The APM Autopilot suite is an open source auto pilot solution that includes hardware, firmware and software to run an autopilot vehicle. The firmware is what contains the skill-set code, which configures the system for the kind of vehicle that you are going to be running. Examples are ArduPlane that allows you to give a fixed-wing plane full autonomous capability and ArduRover that does the same for an unmanned ground vehicle. APM’s APM:Rover won the 2013 and 2014 Sparkfun Autonomous Vehicle Competition too, so that gives good credibility to the system. 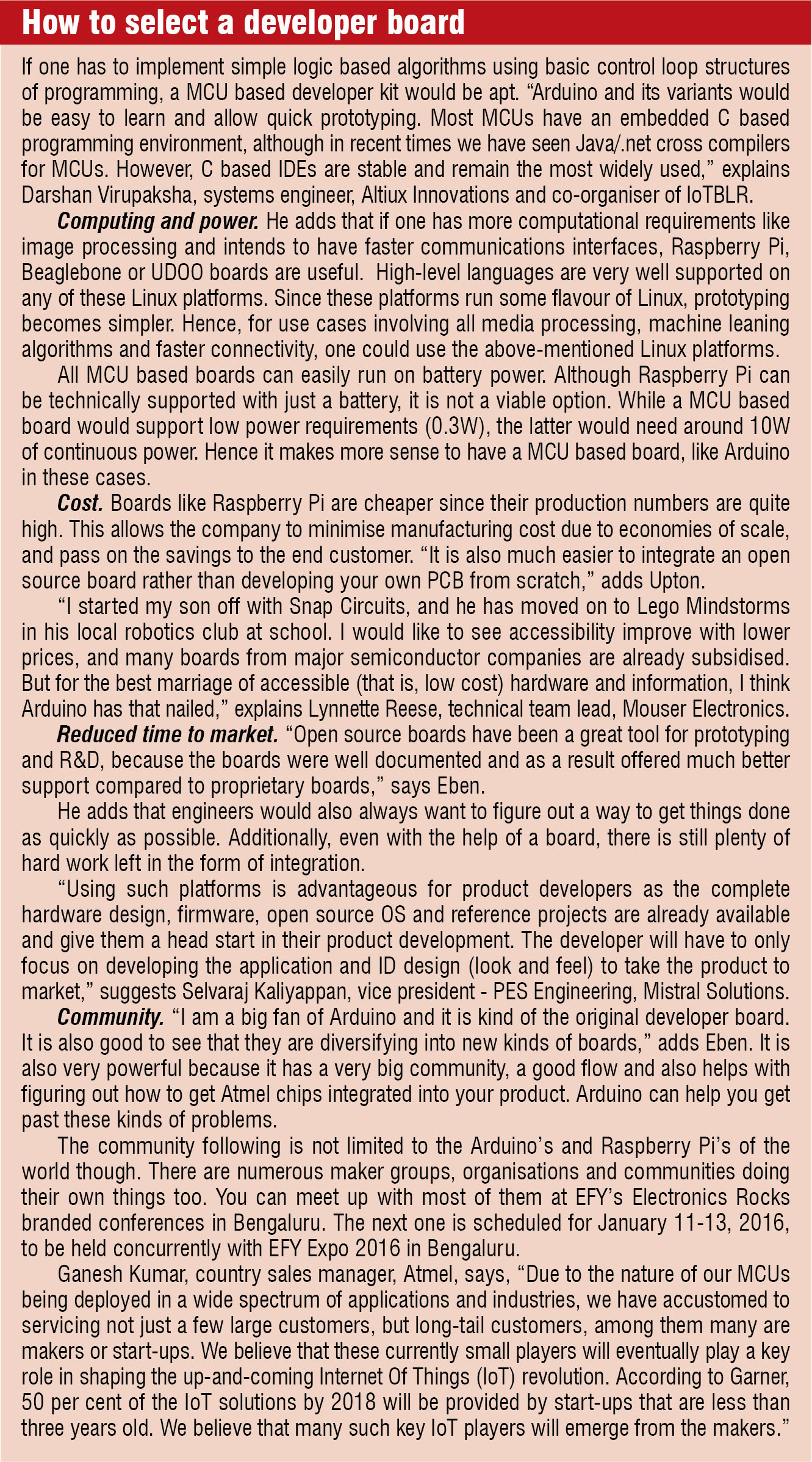 The hardware that you can opt from for this system includes 3DR Pixhawk, which features an advanced processor and sensor technology from STMicroelectronics and comes with a NuttX real-time operating system (RTOS).

APM 2.6 is another piece of hardware that can be integrated for implementing autopilot features onto the board. It is Arduino compatible but requires a GPS unit and a compass module for full autonomy.

One small step
Do not wait. You are in the golden age for developers, with access to a ton of code and hardware that has already enabled others to develop amazing projects. Start tinkering with these boards to build your dream project. Hopefully, one of these might let you touch base with space: the final frontier.