Seetharaman Devendran, general manager, MCU, LPRF, sales & marketing, Texas Instruments, says, “The open source development boards like MSP430 are like cupcakes for the student community as these provide the debugging facility at the initial steps. The other development boards that do not have the open source design do not allow any debugging, and this makes it tough to work with those designs.” 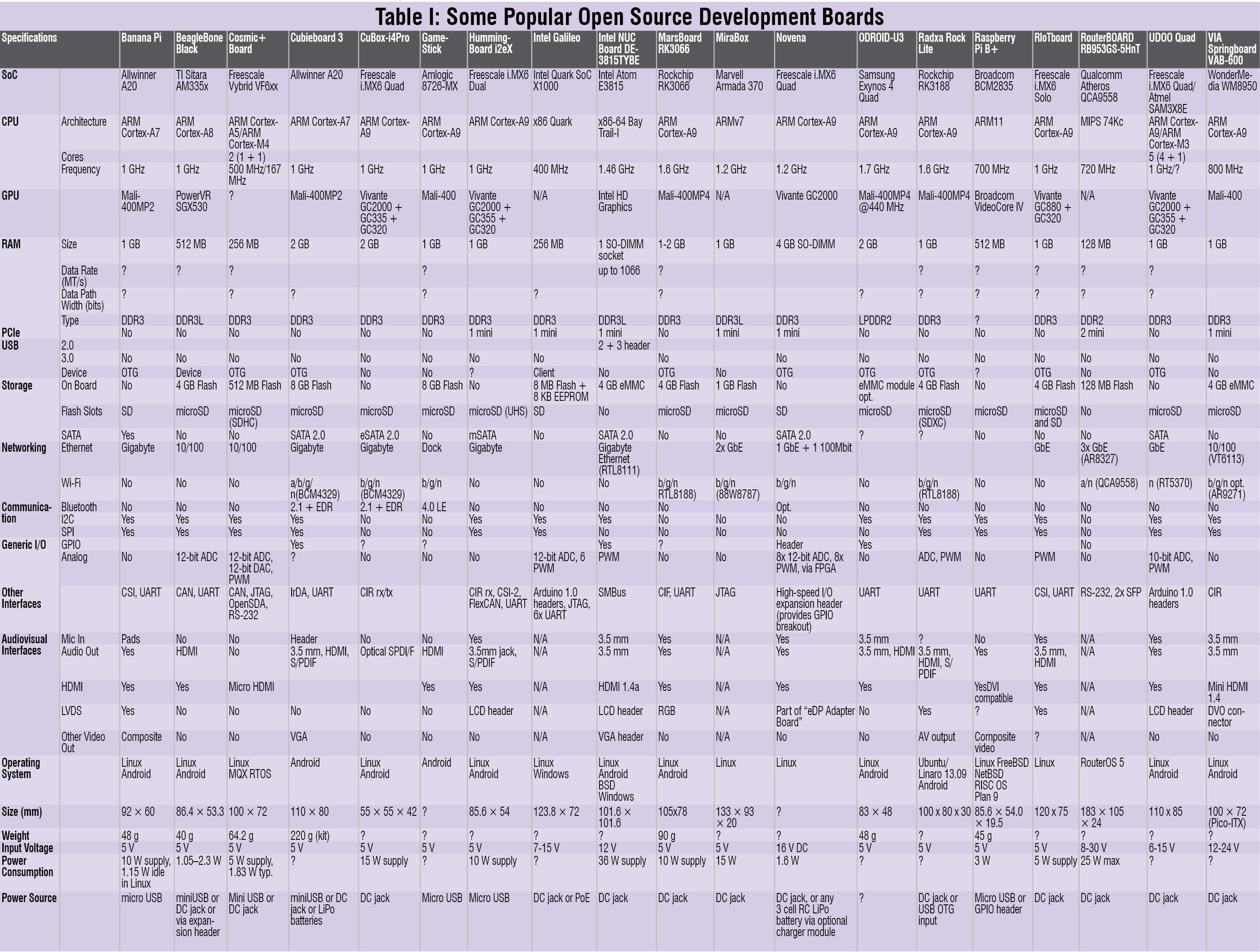 We can get a better understanding of these boards by going through their detailed specifications given in Table I.

Recently launched in India by STMicroelectronics, the Nucleo development board features the STM32 MCU family line and allows one to choose the right MCU from amongst the various combinations of power consumption, performance and features. It supports the Arduino connectivity ST Morpho headers that make it easy to expand the functionality of the development platform for Nucleo to choose any specialised shielding. It has an integrated programmer or debugger, and therefore does not need any separate probe for the same. It comes with the STM32 comprehensive HAL library of software and other software examples, along with some online resources.

Tiny development boards
The requirement of compact devices with maximum efficiency and power led to the development of several tiny, Lilliputian-sized development boards. Despite their size, the boards have wireless communication facilities built-in, encouraging the connection of embedded devices and revolutionising the term Internet of Things (IoT). Some of these are described below.

Femtoduino (price: $22). Considered to be the clone of Arduino, Femtoduino is ultra-small (20.7×15.2 mm) and uses Arduino libraries and compiler. It has a computing power similar to Arduino UNO and uses ATMEGA 328p, 0.13-centimetre connectors, 0402 components and weighs only about two grams. It has 0.25-centimetre-sized pins, and thus can be used on a standard breadboard or perfboard.

Digispark (price: $8.95). A USB development board with Attiny85 microcontroller, it is also similar to the Arduino board, yet is smaller and cheaper. It supports Arduino IDE 1.0 and is compatible with Linux, Windows and MAC operating systems. It has six I/O pins, of which two are reserved for USB only—this is in case the program communicates over USB. It automatically selects the required power from the external source connected via USB.

mbed LPC11U24 (price: $44.95). A low-cost development board with the NXP LPC11U24 MCU, it has been mainly designed for rapid prototyping of low-cost USB devices. But it can also be used for battery-powered applications and 32-bit ARM Cortex-M0-based designs. It has a built-in drag-and-drop Flash programmer with 32kB Flash. It uses a proprietary online compiler that is given access to when the board is purchased. Although this prohibits the need to download and install anything, it encourages the requirement of an active Internet connection to push the codes to the board.

Flora (price: $24.95). Designed to empower wearable projects, Flora is round in shape and has a diameter of 4.45 centimetres. It has a flexible and easy-to-use power supply with a 2A power FET, which is usually not included in wearable options. Flora is fully Arduino compatible, and so, all the Arduino tutorials and libraries are supposed to work on it.

Teensy 3.1 (price: $19.80). An ARM Cortex M4-based development board at such low price is a steal. 18mm × 30.5mm in size, Teensy 3.1 is a complete USB-based MCU board. It allows single push-button programming and works with MAC, Linux and Windows operating systems. It supports a WinAVR C compiler and Teensyduino–an add-on for Arduino IDE. It has about 34 I/O pins suitable for a solder-less breadboard.

USB Bit Whacker (price: $24.95). The USB Bit Whacker is a PIC-processor-based development board featuring the PIC18F2553 MCU. It is 25mm × 40mm in size and has 16 I/O ports. It produces HEX files with almost any compiler. With the transmission and reception ports, it can be used as a USB to UART converter board.

Mini-32 (price: $29). Another PIC-based development board, it features the PIC32MX534F064H MCU and operates on 3.3V power supply. It supports CAN communication and can be used as a DIP40 PIC32 substitute for PIC18 and PIC16 MCUs. It has a USB HID boot-loader, which simply means that no additional software is needed to access the board. The compiled files can be simply dragged and dropped.