In the beginning of the Universe there was nothing. The void space was dark and it harboured no warmth of light. Then came a flash of glowing light and roaring thunder that still reverberates across the visible universe. A team has now harnessed this glow into a light source smart enough to connect to your emotions. The company behind the innovation covered in this story, Rousing Designs, relates emotion to a strong feeling deriving from one’s circumstances, mood or relationships, precisely on which EMO is built on.

EMO lets you alter the ambience of the surroundings depending on the emotions you feel or the mood you are in.

EMO was born out of emotional innovation

The element that adds emotion to this innovation is ‘need to feel’ that customers look for. “In the era of use and throw, I wanted to explore a lighting product that enhances one’s intimacy with one of nature’s most fundamental entities. I wanted to turn light into a companion,” says Nav Krishna, founder, Rousing Designs.

EMO was conceived to be a personalised lighting system using the Internet of Things (IoT), in short. The product has been designed intricately and with utmost detail to keep up with aesthetics and ease of usage. 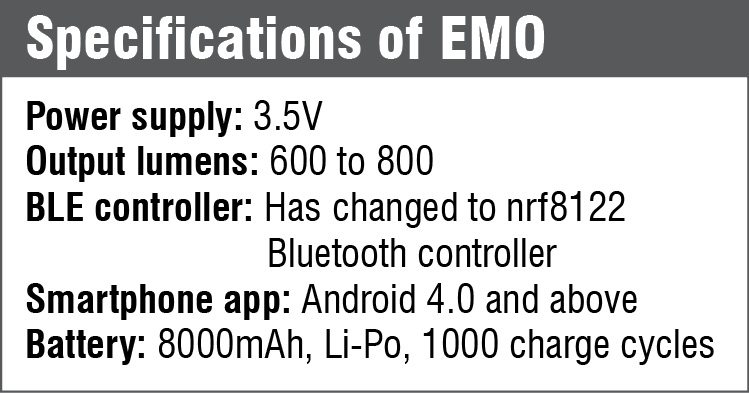 Rousing Designs looked into a lot of research and survey data to design this utility product. “I realised that people were genuinely interested in a product built around experiences rather than just feature sets that do not really solve a problem,” adds Nav Krishna. All these factors led to the ideation and perspective to build a focused product that was based on a simple but elegant design meant to carry light wherever it could be carried.

“When we moved into our new home, I noticed that while the majority of places were well lit, there were certain areas that lacked lighting even during the day,” says Nav Krishna. This prompted a thought for solution. “We come across many such instances when we wish for lighting to be present with us. We do our best by investing in a multitude of products to satisfy this need. Things get a little tricky when we are on the move. Our consistent need for lighting still exists and products to fulfil it do as well. My dissatisfaction from these stems from the manner in which these treat an element as pure as light,” adds Nav Krishna.

Every product in its lifecycle has to be assessed with a platform to capture feedback in the course of its existence. Looking from a business perspective, feedbacks received from customers were strikingly interesting. The prototype saw some of the most creative uses. “An overwhelming majority saw themselves using the light during outdoor trips or during car breakdowns,” says Nav Krishna.

EMO is more than what meets the eye

What makes EMO stand out? Let us take a look.

Thoughtful design process. EMO’s unique design is a story that goes three levels with specific intents. First, perception of customers was captured, which helped designers understand the needs of people with respect to lighting.

Interestingly, during the second phase, a fictional alien character was devised in order to understand how people would interact with light around them. This yielded some very imaginative out-of-the-box unspoken uses cases.

“At a sub-conscious level, people would replace the alien with themselves and give out scenarios that they would like to experience with lighting,” adds Nav Krishna.

During the final phase, acquired data was analysed and patterns allowed the designers of EMO to define product features that people would identify as personal.