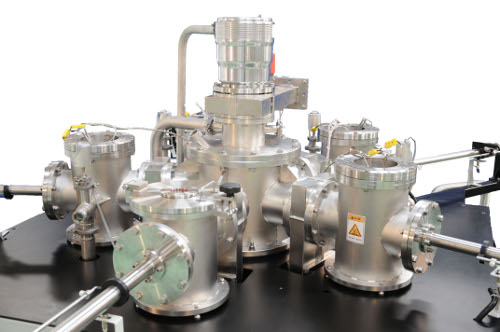 HHV is the flagship company of the HHV Group, a multi-technology group of companies involved in the design, development and manufacture of equipment and products in the field of vacuum technology, solar PV energy and thin films.

Q. What is the new PECVD system that you have just developed?
A. This is a multi-chamber system for carrying out thin film deposition in multiple chambers arranged in the form of a cluster. Hence it is called a cluster tool.

There is a load/unload chamber for loading and unloading the samples. There is a central chamber from where the samples can be transferred to any process chamber arranged in the form of a cluster.

Nanoelectronics: Nanoelectronics refers to the use of nanotechnology on electronic components, especially transistors. In nanocircuits, nanotubes and other wires as narrow as one nanometre are used to link transistors together. Nanowires have been made from carbon nanotubes for a few years. Nanotubes are rolled up sheets of carbon atoms and are more than a thousand times thinner than human hair.

Normally, circuits use silicon-based transistors, but these will soon replace those. The transistor has two different branches that meet at a single point, hence giving it a Y shape. Current can flow throughout both branches and is controlled by a third branch that turns the voltage on or off. This new breakthrough can now allow for nanocircuits to hold completely to their name as they can be made entirely from nanotubes.

Nanotubes grown by plasma enhanced chemical vapour deposition: During CVD, a substrate is prepared with a layer of metal catalyst particles, most commonly nickel, cobalt, iron or a combination. The diameters of the nanotubes that are to be grown are related to the size of the metal particles. This can be controlled by patterned (or masked) deposition of the metal, annealing, or by plasma etching of a metal layer.

The substrate is heated to approximately 700°C. To initiate the growth of nanotubes, two gases are bled into the reactor: a process gas (such as ammonia, nitrogen or hydrogen) and a carbon-containing gas (such as acetylene,ethylene, ethanol or methane). Nanotubes grow at the sites of the metal catalyst; the carbon-containing gas is broken apart at the surface of the catalyst particle, and the carbon is transported to the edges of the particle, where it forms the nanotubes.

Q. How can it find applications for OLEDs?
A. An OLED consists of the following parts:

Anode (transparent): The anode removes electrons (adds electron “holes”) when a current flows through the device.

Organic layers: These layers are made of organic molecules or polymers. (deposition).