City-Scale Surveillance Being Powered by AI

Implementation of surveillance and security sector technologies must be robust, reliable and address real customer challenges.

China’s controversial deployment of an artificial intelligence (AI)-powered mass surveillance system to bring control to its cities has been stirring a lot of discussions lately. The general concern is the extent to which this will affect the privacy and freedom of the citizens and how well it aligns with democratic ground rules. However, it also showcases the power of AI in surveillance.

Chinese administrators can identify any citizen on the road through facial recognition or predict their motives through behavioural analysis. The system has helped them catch many crime-offenders from massive crowds. Essentially, it has hinted that a surveillance network, if scalable enough, can actually take the responsibility of securing a full-scale city.

Smart cameras powered by computer vision are being considered as the main source of video surveillance for smart cities. In the surveillance industry today, machine learning is mostly used for video analytics. The technology has become an important component in a variety of applications and use-cases. Software engineers are working towards including it in many different environments based on compelling use-cases like city-level security. However, implementations have barely begun.

Johan Paulsson, chief technology officer, Axis Communications, says, “The surveillance and security sector is often tempted to over-promise solutions with new technologies. This has been significantly observed in the case of AI in video analytics, specifically when it comes to deep learning. Implementation of such technologies have to be robust, reliable and address real customer challenges.”

Deep learning happens in two steps: a model training step and an execution phase. Deep learning platforms crunch through a lot of historical data to learn and understand execution patterns. This requires powerful processing systems, necessitating investments in dedicated servers. Cloud-based deep learning services, like those provided by Google, Amazon, Microsoft and other players, may also be used to model a portion of the system. Fine-tuning and additional training of the system can be carried out over Edge computers.

The trained model is then used by the system in the execution phase. Based on data inputs fed to the system and referring to trainings, it can automatically provide necessary solutions. However, for time-critical applications, higher processing power is required. The same goes for large-scale video surveillance systems, where city-level infrastructure organisers are needed to strategise these investments.

The other necessity that will drive the implementation of this technology is the use of Edge analytics. Paulsson believes that while cloud-based services are quite abundant today, the data tsunami that we are looking at due to the boom of the Internet of Things (IoT) may just as well overwhelm the extent of services available. In time-critical situations, like during an ongoing crime or an accident, where a smart camera is expected to send alerts immediately, a more dedicated and in-situ network will be required. This is where Edge devices will come in. The first round of data computation will occur in the camera itself, which will help it to react in emergency situations. Full-scale analytics on the data can be taken up by the cloud platform later and eventually provide necessary insights. As a result, cloud and Edge will work in collaborative mode to deliver the highest amount of benefit.

According to a report by IDC, the security and surveillance market in India, which stands at ₹ 20 billion at present, is growing at a CAGR of 32 per cent, a trend that is expected to continue till 2023. On the other hand, the global AI and cognitive systems market is projected to cross US$ 47 billion by 2020. The mix of the two technologies are creating strong opportunities for both AI solution providers and surveillance systems producers, in addition to creating doorways for a partnership-based ecosystem. Better quality and reasonable cost can be ensured with a dense market of AI-powered surveillance platforms. 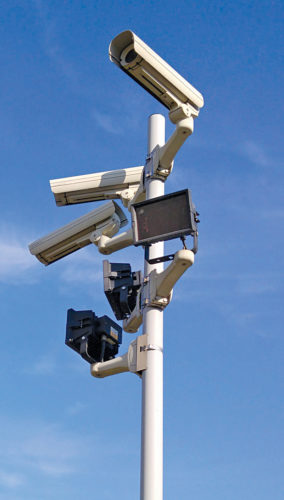 Indian players are taking the onus to leverage on this vast opportunity. C-DOT has recently revealed a satellite-based AI-powered surveillance technology that uses facial recognition and other features. It can be used in emergency situations (like natural calamities such as flood or earthquake), or in highly-crowded areas to identify lost persons or to detect environmental conditions and alert rescue teams on-the-fly. They are running trials and preparing to transfer the technology and make it commercial-ready. More players are directly partnering for Smart City projects to help with surveillance needs.

However, some challenges will have to be addressed during the implementation of these technologies, like ensuring a strong cybersecurity system in place, having well-thought policies to differentiate surveillance from privacy breaches, and making all the hardware theft-proof and weatherproof.