Over the course of history, different forms of payment systems have been in existence. Initially, trade by barter was common. However, the problems of barter necessitated the introduction of various forms of money. This era became the cash based economy, which most countries are gradually phasing out, modified or integrating into a new cash-less system involving POS terminals and digital economy.

Recent development in technology for financial transaction has increasingly fueled the use of electronic-based payment instruments globally. In advanced economy like the United States, France etc. the use of cash for purchasing consumption goods has declined since 1980. Electronic payments have made substantial inroads among consumers in these countries accounting for ~ 60% of all consumer transactions.

Meanwhile, in most countries the cashless journey has only just begun. Majority of the Developing countries have a negligible share of consumer transactions being done via cashless means.

Electronic payments have proven to boost economic growth while advancing financial inclusion and for those reasons, countries are working to make payment systems less dependent on cash. Governments across the globe are pushing for a paradigm shift in economic policies to push cashless transactions.

One of the major instruments facilitating this transition in developing economies is the Handheld Point of Sale Terminals.

A point of sale terminal (PoS terminal) is an electronic device used to process card payments at retail locations. A PoS terminal generally does the following:

Apart from Payment Sector these terminals are also being used to revolutionizing the Banking & Public Distribution worlds by providing accessibility to electronic banking service in Rural & Urban Districts. Particularly in India we see such examples in the form of:

Aadhaar ekyc is a paperless Know Your Customer (KYC) process, wherein the Identity and Address of the subscriber are verified electronically through Aadhaar Authentication.

Businesses have a range of PoS options available to them from simple mobile payment processors to those capable of managing large multi-location businesses. The different types of POS Terminals are described below:

Whereas, EMV is a standard for smart payment cards and payment terminals/ATMs to provide protection against counterfeit card frauds. EMV cards are smart cards that store the data on integrated circuits in addition to magnetic stripes and can be read using magnetic/ SAM Card readers or RFID/ NFC technology. 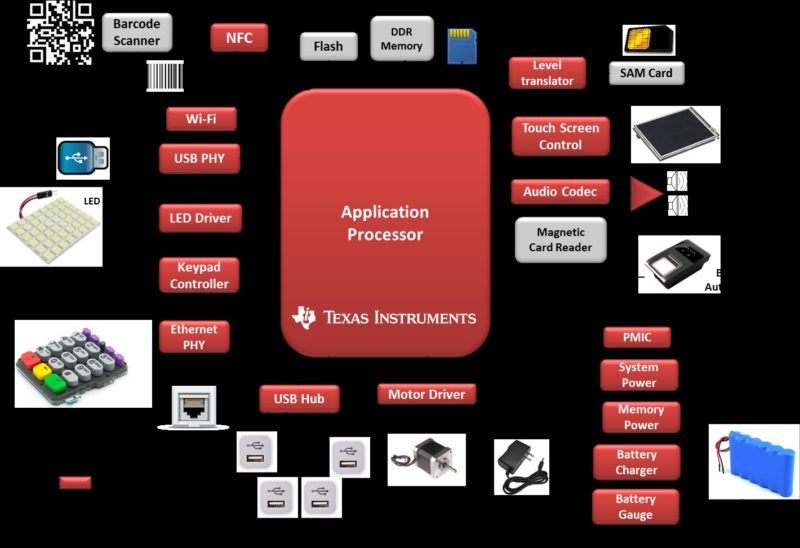 Embedded Processor is the heart of any POS system and its core features determine its usability in POS ecosystem. ARM processors based on Cortex-A8 & A9 CPUs with Graphics Accelerator are generally employed for these applications. These ARM and graphics processors with advanced security features like secure boot & high strength encryption are optimized for performance while delivering low-power consumption. The balance of performance, Power & Security make the devices ideal for Point of Sale equipment.

Wi-Fi & BT/BLE modules are also used as connectivity options in modern POS terminals. These modules are designed to offer high throughput and extended range along with a power-optimized design. Some modules available today also offer dual-band coexistence flexibility i.e. 2.4 GHz and 5 GHz with dual antennas. Additionally, modules today are being offered with multiple certifications like FCC, IC, ETSI/CE, and TELEC for expediting time to market.

In applications that include a LCD and require a tactile interaction, a touch screen controller (TSC) may be used. TSC contains a low-power analog-to-digital resistive touch screen converter along with drivers and the control logic to measure touch pressure.

Additionally, the input power needs to be scaled to different voltage levels for powering various components. This is achieved using low quiescent current LDOs & DC-DC Converters. LCD used in POS terminals need an array of back-lit LEDs for illumination that can be achieved using LED drivers.