As environmental concerns over global warming escalate, there is a worldwide shift towards cleaner fuels for power generation for sustainable development of smart cities. Aerostrovilos Energy, an IIT-Madras incubated startup founded by Rohit Grover, Pradeep T., Suresh M. and Satyanarayanan R. Chakravarthy in 2017, is indigenously developing micro gas turbines (MGTs) for power generation to reduce usage of such conventional fuels as coal, for lower carbon footprint.

MGTs are the smaller, simpler version of jet engines. Talking about the problem in the industry, Grover explains, “Jet engines have been used for propulsion or large power generation, but these have never been cheap enough to compete with IC engines for backup gen-set applications, where we today see diesel generator (DG) sets.” 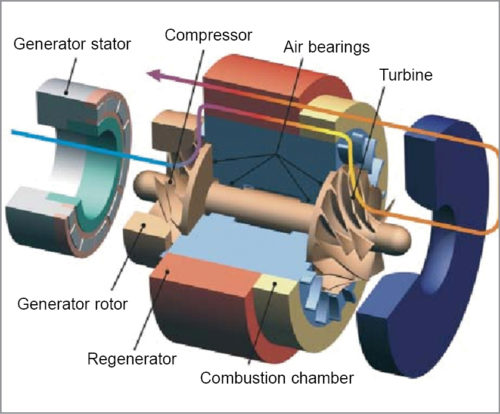 Their first product is a compact and lightweight MGT for 20kVA generator. The generator is run by a single-shaft MGT engine. It does not require cooling fluid or oil. For higher power, these turbines can be used in series. Its minimum life is 10,000 hours, or ten years. Manufacturing began in December 2018. Grover says, “Currently, we have fuel-agnostic 20kVA and 100kVA units. Using these two systems, we can provide the whole portfolio of power from 20kVA to 1000kVA. Efficiency is 43 per cent electric even at twenty per cent partial loads, making it on average fifty per cent more efficient than a DG set.”

Being fuel-flexible, MGTs can run on both liquid fuels, like biodiesel and bioethanol, as well as gaseous fuels, like biogas and natural gas. Hence, biowaste from sugar mills and textile factories, among others, can be used as source, which decreases cost.

The company’s patented technology reduces both nitrogen-oxides (NOx) and other emissions (like particulate matter) to a negligible level, and can burn very low calorific value fuels as well, which makes the generator environmentally friendly. Grover adds, “Pollution levels are hundred times less than current emission norms, that is, CPCB II (Central Pollution Control Board).”

MGTs can run for long durations, and maintenance cost is low as frequent servicing is not required. All these factors make these useful as a reliable solution for off-grid applications. These can serve as backup power for several places like offices, apartments, healthcare centres and data centres. As an alternative to DG sets, MGTs find applications in oil rigs, heating and cooling systems. Electric vehicles can also use these as onboard chargers to power batteries.

The company plans to market the product at a low price to reduce the need for imports and make it affordable to the masses, thereby boosting Make in India initiative. Regarding support, Grover explains, “We received a grant from Bharat Petroleum Corp. Ltd (BPCL) in 2018 as part of their startup support initiative—Project Ankur—which was under the government’s Startup India scheme. Other than that, we have received a lot of support from IIT-Madras labs, mainly National Centre for Combustion Research and Development.”

Discussing the startup’s future plans, Grover says, “Our prospective clients who depend on diesel fuel for power generation can shift to liquefied petroleum gas (LPG), which is cheaper and cleaner than diesel. Other than replacing the IC engine in the DG sets, our next target is to work on doing the same for four-wheelers. Ashok Leyland has shown interest to use these in its intercity buses.”