The surge in data usage over the recent years have thrusted the Indian data center market into an optimistic trajectory, making India the second fastest growing market in Asia Pacific, accounting for 5.23 percent of the regional market share in 2015. According to a report by the Internet and Mobile Association of India (IAMAI), India’s data center capacity is estimated to be over 6.6 million sq ft in 2016, which is on track to meet the projected data consumption demand of 2.3 million petabytes by 2020. As more businesses look into reliable, safe and energy-efficient measures in storing large-scale data, server manufacturers are turning to liquid cooling for cost-efficient and effective thermal management. Here, in particular, quick disconnect couplings are playing an integral role in cooling system performance and reliability.

Implementing an efficient, effective and safe cooling system to remove waste heat is an ever-growing concern for data centers. Energy consumption by servers has risen dramatically within the last decade as power densities of server racks have increased. While server racks of a decade ago consumed 250 W to 1.5 kW each, current power racks consume around 10 kW. Projections for the next decade put power consumption at 50 kW. Further, it is estimated that, by 2020, the data center industry will generate as much CO2 as the airline industry.

Traditionally, data centers have relied on air for cooling. However, forcing cold air through server racks is an inefficient and costly method to remove heat. 60 percent of cooled air is lost as by-pass and through air mixing, and cooling costs can exceed the costs of running the servers. As computer servers are pushed to run faster and data center rack densities increase, it is becoming impractical to expect moving air to provide sufficient cooling.

Traditionally, data centers have relied on air for cooling. However, forcing cold air through server racks is an inefficient and costly method to remove heat. 60 percent of cooled air is lost as by-pass and through air mixing, and cooling costs can exceed the costs of running the servers. As computer servers are pushed to run faster and data center rack densities increase, it is becoming impractical to expect moving air to provide sufficient cooling.

Water, on the other hand, is 3,500 times more effective than air on a volume basis at storing and transferring heat. In fact, 41 percent of respondents in a recent industry-wide survey expect a combination of air and liquid to be the primary method of data center cooling. Liquid cooling represents the best alternative to raising cooling efficiency and reducing air conditioning costs.

Using liquid to cool computers goes back to the mid-’60s when IBM implemented liquid cooling for its 04 mainframe. Nearly 50 years later, IBM recently employed processor-level liquid cooling for a supercomputer located at a Swiss university, where water is circulated to cool the processors and then pumped to the underfloor heating system where the waste heat can be used for building heat.

Compared with air-cooled servers, IBM estimates that the liquid-cooled system uses 40 percent less energy, and the additional use of the waste heat lowers carbon footprint by an estimated 85 percent. 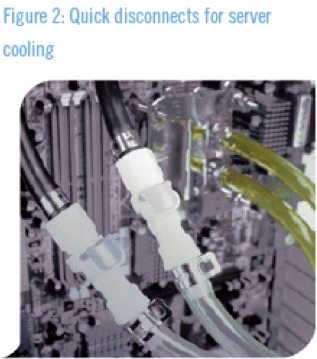 One of the critical components in liquid cooling systems is the quick disconnect coupling. These couplings are used to link together flexible tubes that carry cooling liquid to individual servers and central manifolds on the server rack connected to central heat exchangers (see Figure 2). The critical contribution of quick disconnect couplings becomes more evident when considering that these couplings need to stay reliably connected for long durations but then disconnect easily without valve failure. Furthermore, when servers need to be serviced or changed out, the couplings must easily disconnect without dripping or spilling coolant on sensitive electronics.

The chief concern of server designers and data center operators is system reliability. According to the Ponemon Institute, the average cost for any type of data center outage is more than $690,000. One of the basic methods of achieving high reliability is through redundant components that take over if primary components fail. In liquid cooling systems, redundant pumps are often employed to prevent loss of circulation. However, individual quick disconnect couplings in the cooling system represent a single point of failure. A faulty connector has no backup, so a leak might cause the entire server rack to fail. This puts a critical focus on the design, construction and quality of the quick disconnect coupling. 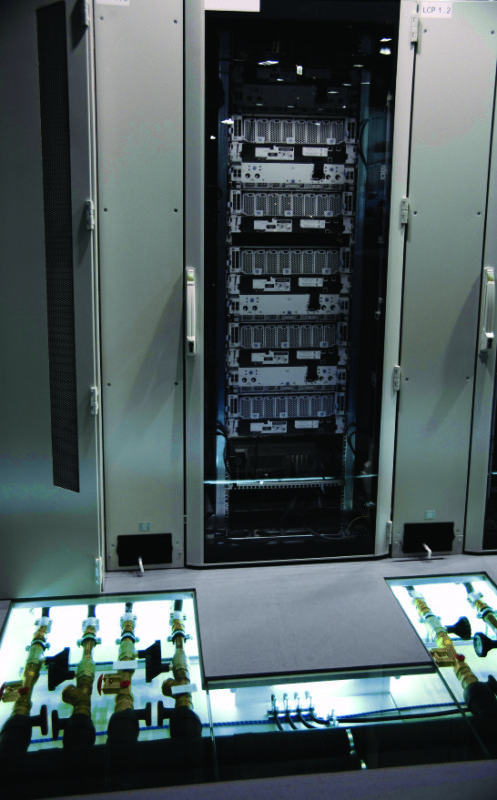 When selecting quick disconnect couplings for liquid cooling of servers and other high-end computers, it is important to look for the following five attributes to ensure reliability.

Liquid cooling system quick disconnect couplings need to be durable and robust. They also need to be designed for low-pressure applications and able to withstand long periods of connection before being disconnected. Couplings should also be designed for low-pressure drop in order to minimize flow restriction and the burden on cooling system pumps.

Some liquid cooling systems employ couplings developed for the hydraulics industry because of their perceived higher durability. However, the seals and internal valves of these couplings were not designed for low-pressure applications and where couplings are required to be connected for months or years at a time. When selecting quick disconnect couplings for liquid cooling systems, look for couplings that are designed specifically for low-pressure applications and feature robust construction.

Technicians need to be able to easily disconnect cooling loops from servers without risk of water or other coolant leaking on to sensitive electronics.

Quick disconnect non-spill couplings can feature two styles of internal valves that automatically shut off the flow of liquid when the couplings are disconnected. One style of double-shutoff coupling features poppet valves that, by virtue of their design, trap a small amount of liquid within the coupling body. This liquid can drip out when the coupling is disconnected. While the leakage is not a large amount — likely just a drop or two — it might be sufficient to raise safety or reliability concerns around electronics.

In contrast, true dry-disconnect couplings feature flush-face valves that allow no more than a coating of cooling fluid on the valve surfaces. This virtually eliminates the possibility of dripping onto vital components. Look for couplings that feature precision-made, internal flush-face valves and, ideally, couplings designed specifically for liquid cooling applications.

It is important to be able to easily disconnect the cooling loops from servers with no spills. Whether it is a push-to-connect or twist-lock type of coupling, the valves need to reliably close when disconnected, even after having been connected for months or years. Another aspect of ease of use is the availability of color-coded couplings, which help ensure hot-to-hot and cold-to-cold connections. When a cooling system is equipped with properly designed quick disconnect couplings, it simplifies maintenance and serviceability.

Couplings used in liquid cooling applications remain in a connected state for extended periods. Upon disconnection and reconnection, they need to function perfectly so there are no drips or leaks of coolant. Seals that are not properly formulated or designed can take a “set” that causes leaks upon disconnection. The seals also have to be compatible with the cooling liquid to prevent seal swell, shrink, brittlement or other distortions. In some cases, couplings may feature dual seals to enhance sealing capabilities in the quest for higher reliability. However, dual seals can introduce greater friction to the system and might actually reduce reliability if not designed properly. 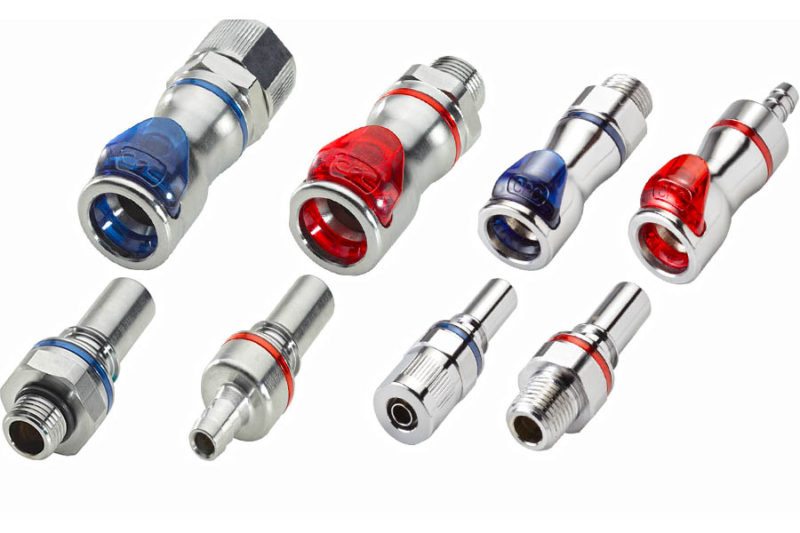 Most plastics and metals are compatible with cooling liquids such as water-glycol mixtures. However, if your cooling system uses a proprietary cooling liquid, be sure to determine whether the coolant is compatible with coupling housings, seals, valves and tubing. Use particular caution when selecting metal couplings for the cooling system that might come into contact with a server chassis, as dissimilar metals can create electrolysis and corrosion where they touch. Couplings developed from metal balland-sleeve hydraulic couplings are not intended to be used for cooling applications, so materials compatibility should be carefully checked. Compatibility issues can be avoided by using metal couplings designed specifically for liquid cooling.

As India enters the digital economy, up to US$7 billion in Government expenditure has been spent on IT products and services last year, a 3.1 percent increment from 2015. With greater pressure imposed on servers to support India’s rapidly growing demand for connectivity among a population of over one billion residents, sufficient cooling of critical hardware becomes crucial for the sustainability of its data center market. Liquid cooling of computers and servers is the most efficient and cost-effective method of dissipating heat generated by today’s faster and higher-density electronics. By providing cooling at the source of the heat, air conditioning demands can be reduced along with the attendant costs and carbon impact.

With cooling system designs still evolving, it is important to understand the role that quick disconnect couplings play in these systems and how they contribute to system reliability. Evaluating couplings based on their robustness, valves, seals and materials compatibility can help ensure long-term performance. To make the best choice for your application, work with a coupling supplier that understands the demands of liquid cooling and can offer a wide selection of couplings, including purpose-built cooling couplings and custom design capabilities.

A leader in connection technology, CPC has been delivering quick disconnect couplings for liquid cooling of electronics for over 20 years. Applications for CPC’s liquid cooling connections include PCs, supercomputers, data centers, chillers, medical equipment and many others that require quality and performance for critical fluid handling solutions. Our dripless quick disconnect couplings feature automatic non-spill shutoff valves and integral terminations for safety, ease of use and reliability. CPC offers multiple options for materials, configurations, sizes and valves and custom solutions to meet unique needs.