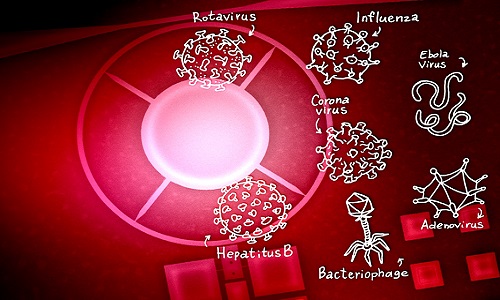 Nano-electromechanical sensors measure the mass of nano-objects that are inaccessible to conventional mass spectrometry. They can be used to characterize synthetic or natural nanoparticles, such as viruses. Until now, the sensors’ electrical mode of detection restricted both the precision and speed of analysis and would only take into account spherical particles.

To analyse biological particles with large aspect ratios, such as viruses or fibrils, CEA scientists have now demonstrated a breakthrough in single-particle mass spectrometry (MS) that could fast track the detection of viral particles in hospitals, offices, aeroplanes and other public places.

The CEA team, with the expertise of the French National Center for Scientific Research (CNRS), overcame this hurdle by developing novel mass sensors and used them to demonstrate MS measurement of individual nanoparticles by optomechanical detection.

The researchers used light waves to enable new sensor geometries, leading to better speed and analytical performance. Interaction with the sensor is performed with optical signals instead of electrical signals, which provides a 10k improvement in motion sensitivity.

“This demonstration of on-chip optomechanics as a superior alternative to electromechanical resonators for high-resolution, single-particle mass spectrometry paves the way to the analysis of viruses regardless of their shape, rigidity or position,” said Sebastien Hentz, director of research at CEA-Leti. “The capture area is 10 times larger than existing MS sensors, which translates into faster and more accurate analysis.”

“Building on our demonstration of a proof of concept of mass detection in this highly challenging mass range, we are now working toward the development of a new optomechanical mass spectrometer desktop prototype that could detect and characterize airborne viral particles of any shape,” Hentz added. “For this purpose, our photonics-derived fabrication process is easily amenable to the multiplexing of a large number of resonators using standard wavelength-division multiplexing and packaging techniques.”

The results of the work were published in a paper titled Optomechanical Mass Spectrometry, which can be read here.