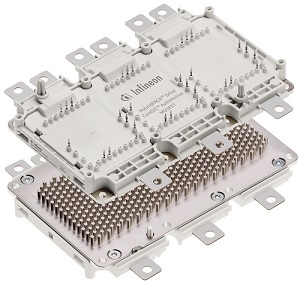 In 2017, the HybridPACK Drive with silicon EDT2 technology was first introduced and offered a scalable power range of 100 kW to 180 kW within the 750 V and 1200 V class – delivering high efficiency on a real-world driving cycle.

The new CoolSiC version is based on a silicon carbide trench MOSFET structure. Compared to planar structures, the trench structure enables a higher cell density, resulting in the best-in-class figure of merit. Therefore, trench MOSFETs can be operated at lower gate-oxide field strengths, resulting in increased reliability.

The power module offers an easy upscale path from silicon to silicon carbide with the same footprint, allowing the inverter design to achieve higher power of up to 250 kW in the 1200 V class, greater driving range, smaller battery size and optimised system size and cost. To offer an optimal cost-performance ratio for different power levels, this product is available in two versions with different chip counts, resulting in either a 400 A or 200 A DC rating version in the 1200 V class.

The first-generation of CoolSiC automotive MOSFET technology is optimised for use in traction inverters, with a focus on achieving the lowest conduction losses, especially under partial load conditions. Combined with low switching losses of silicon carbide MOSFETs, an efficiency gain in inverter operation is obtained (compared to silicon IGBTs).

In addition to optimised performance, reliability is another area of emphasis. Automotive CoolSiC MOSFETs are designed and tested to achieve short circuit robustness and a high degree of cosmic ray and gate-oxide robustness, which is key for designing efficient and reliable automotive traction inverters and other high voltage applications. The HybridPACK Drive CoolSiC power module is fully qualified to the AQG324 norm for automotive power modules.

“The 800 V system of the Electric Global Modular Platform (E-GMP) represents the technological basis for the next generation of electric vehicles with reduced charging time”, said Dr Jin-Hwan Jung, Head of the Electrification Development Team at Hyundai Motor Group. “By using traction inverters based on Infineon’s CoolSiC power module, we were able to increase the range of the vehicle by more than five per cent because of efficiency gains resulting from the lower losses of this SiC solution compared to Si-based solution.”

“The automotive e-mobility market has become highly dynamic, paving the ground for ideas and innovation”, said Mark Münzer, Head of Innovation and Emerging Technology at Infineon. “As the price of SiC devices significantly decreases, the commercialization of SiC solutions will accelerate, resulting in more cost-efficient platforms adopting SiC technology to improve the range of electric vehicles.”

The new HybridPACK Drive CoolSiC is in production now and will be available starting June 2021.