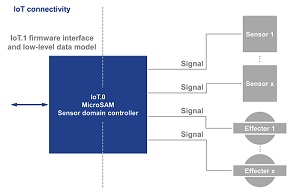 PICMG, a consortium for the development of open embedded computing specifications has announced the ratification of IoT.1 specification defining a communication standard between sensors/effectors and local IoT controllers such as micro Sensor Adaptor Modules (microSAM) already specified by PICMGs IoT.0 specification.

The IoT.1 specification defines a firmware interface and low-level data model that provides for vendor-independent configuration of smart sensors and effectors, as well as plug and play interoperability with higher levels of the installation. IIoT.1 supports both sensing and profiled motion control required by most emerging Industry 4.0 applications.

The IoT.1 specification is the first work product from PICMG based on collaboration with the DMTF organisation. PICMG’s IoT.1 specification leverages and extends the Platform Level Data Model (PLDM) specification from Distributed Management Task Force (DMTF) in order to address the needs of industrial automation and control. PLDM is a low-level messaging system that supports topologies, eventing and discovery and runs over a variety of system-level buses such as I2C/SMBus and PCIeVDM (Vendor-Defined Message) over MCTP (Management Component Transport Protocol) as well as RBT (RMII-Based Transport (RMII = Reduced Media Independent Interface)) over NC-SI (Network Controller Sideband Interface).

IoT.1 was developed in order to benefit the industry in four specific ways:
1. To enable sensor vendors to create smart sensors without having to manufacture the control circuitry and/or software by purchasing these components from PICMG-compliant suppliers
2. To enable controller suppliers who wish to create smart sensors or smart-sensor components to do so in a way that is interoperable with other suppliers
3. To enable sensor/effecter integrators to integrate sensors/effectors from multiple vendors with controllers from multiple vendors
4. To accelerate the uptake of smart-sensor technology through open specifications and interoperability

When combined with the PICMG sensor-domain network architecture and data model, sensors connected to MicroSAMs (PICMG IoT.0) or other controller modules will seamlessly integrate into the network with plug-and-play interoperability.

“Nothing like this has ever been done before in Industrial IoT – PICMG IoT.1 brings true multi-vendor plug and play interoperability to the sensor/effecter domain with flexible, open-standards-based solutions,” said Doug Sandy, CTO of PICMG.

Jessica Isquith, president of PICMG, adds “this specification has the potential to accelerate the shift to better sensor interoperability and encourage a better and wider range of options.”

New Framework For COM-HPC Based On Edge Computing