Generating Functions For A Diverse Range Of Applications

Requirement of test and measurement equipment has always been there from electronics equipment designers. These have always helped in delivering the best products; the ease of testing equipment with computer systems is only expected to improve productivity. This also minimises the chances of human errors in the final result, as the signal generated can be calibrated and values can be automated via the computer.
However, accuracy is not enough. “Customers expect higher precision than in the past, that is, 16-bit amplitude resolution instead of 14-bit used in the actual generation,” says Rao. V. Mahadevan, managing director, VigVen Tech Mark Pvt Ltd, supports this argument about high-resolution equipment. He says, “Such precision would result in minute changes being highlighted, resulting in better end devices.”
Rao mentions another requirement as, “requests for digital pattern generators as additional functionality.” With the move to digital signals, this was bound to happen sooner or later. Keysight, NI and Tektronix, among others, provide products catering to this category as well.

Signal generation from a single clock

Use of DDS has been another advantage in coming up with high-frequency devices. A DDS has many advantages over the earlier phase-locked loop (PLL), including much better frequency agility, improved phase noise and precise control of the output phase across frequency-switching transitions.

Rao says, “Our preferred implementation is based on FPGAs containing several DDSes, thus providing maximum flexibility at reasonable prices.It allows us to tailor the instrument to the needs of big-volume customers.” 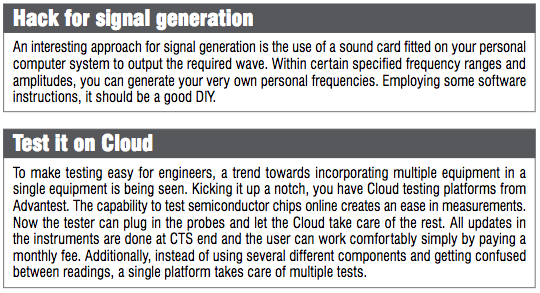 “Some test challenges are generating a waveform with many points, simulating signals with high integrity, synchronising two signals to generate pseudorandom binary sequence signals, creating differential signals, changing one segment of arb without redesigning the whole signal and needing to sweep arb through a set of different frequencies,” says Kishore

Another matter of concern with function generators is the price. “Price is, as usual, an issue,” adds Rao. However, with the release of multiple test equipment incorporated in a single device, this should not be a major issue now. Bringing the best in technology also has its problems that can correlate to cost. “The time to market causes the product to be designed with the latest processors to be delayed,” says Mahadevan.

Could there be a wave of change

Addition of multiple testers in a single piece of equipment has been the manufacturing strategy for some time now. When you incorporate multiple equipment with a familiar computer interface, working with the equipment will be highly simplified.

Looking forward, we can surely expect some other integration into the function generator. If the cost challenges can be somehow handled, a function generator can be regularly updated. And it would not just lie on the corner table for an entire year to be used only once in a while.