Improved experiment
In the September experiment, the pulses of neutrinos sent by CERN were relatively long—around 10 ms each. So measuring the exact arrival time of the particles could have large errors. In November, the experiment was repeated with beams that were thousands of times shorter—just 3 ns. There were large gaps of 524 ns between these. So OPERA could measure the arrival time with greater accuracy.

With such short pulses, one does not have to worry about the shape, duration, etc of the beams. It is just a ‘click,’ and one has to note when it happened without worrying about when the beam started or ended. Being more accurate, a shorter number of readings (20 instead of 15,000 made in September) were enough to replicate the earlier experiment.

While the OPERA team has been making its findings public, it is still reluctant to dispute Einstein’s theory. They are merely requesting others to pay attention to this phenomenon and validate the experiments independently, while at the same time planning further experiments themselves. For one thing, they are planning to repeat the experiments using muon detectors with improved clock synchronisation.

Mixed reactions
As with any ‘big’ announcement, OPERA’s revelation has also been met with mixed reactions. While on the one hand, there are scientists raring to create a ‘new’ physics, there are also those who are dismissing the findings as mere humbug. Faulty experiments, say some, while others blame the different gravitational conditions at CERN and Gran Sasso. Quite understandably, it is not easy for the world of science to accept a challenge to the very foundation of modern physics.

In fact, another group of scientists working at Gran Sasso has itself contradicted the OPERA findings. The ICARUS Collaboration, another team at Gran Sasso, also captured some of CERN’s neutrinos. Their goal was to measure the energy and not the journey time. If the neutrinos travelled faster than light, these would have emitted some radiation throughout the journey, losing energy in the bargain. However, the energy remained the same from start to end—so OPERA’s claim is not feasible, according to the ICARUS Collaboration. 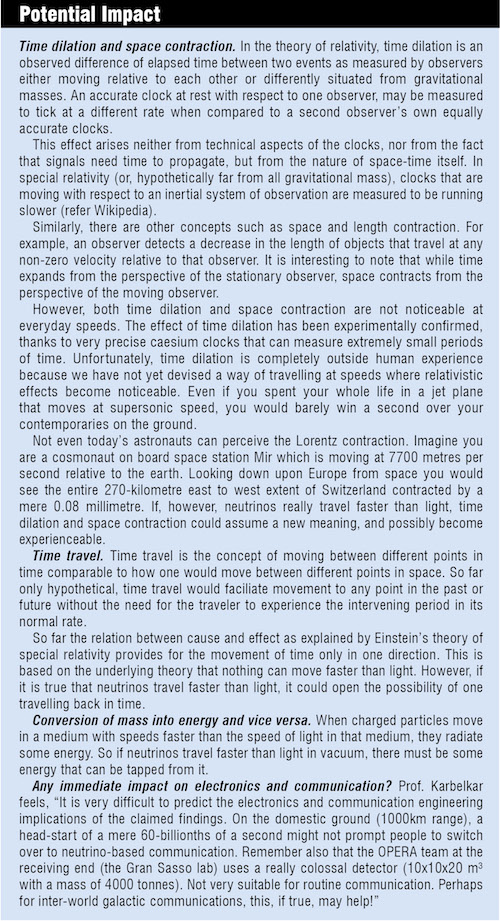 Prof. Dr Subhash Karbelkar, head of the department of physics, BITS-Pilani, explains, “If an object travels faster than the speed of the appropriate waves, it leaves behind a trail of disturbances, which naturally costs it some energy. A familiar example of this phenomenon is the sonic boom behind supersonic (faster-than-sound) planes or the conical wake that ducks leave on the pond’s surface. When charge particles move in a medium with speeds faster than the speed of light in that medium, a kind of radiation called the Cerenkov radiation is emitted by them. It has been predicted by Cohen and Glashow (Nobel laureate) that in a similar manner, neutrinos moving faster than light should emit some such radiation and in the process lose out energy in a specified manner. The ICARUS team has reported that they have seen no such effect in the energy distribution of the neutrinos.”

He also points out another reason to doubt the ‘faster than light’ phenomenon. “When the famous supernova explosion happened in 1987, the light and neutrino bursts from it came more or less at the same time (with a few hours’ difference), whereas OPERA’s claim would imply that the neutrinos should have reached several years earlier. Considering the fact that the time taken for light is only estimated in the OPERA experiment we must be more patient and wait for a more rational explanation of the observation to surface. So it looks that there is no need to doubt the Einstein’s theory of relativity at this time.”

It is to be noted that OPERA’s and ICARUS’ efforts were experiments and not discoveries. The difference between the two is humongous. While even the smallest discovery might be accepted without doubt, no experiment would be absolutely acceptable unless verified by a third party. It is believed that some labs in the US and Japan have undertaken to verify this observation.

Prof. Karbeklar adds, “The relativity theory has been verified in so many ways that even if the new OPERA result is confirmed, it may not entirely scrap Einstein’s theory; just as Einstein’s theory didn’t overthrow the previous one entirely but only brought out its limits of validity. But as I have mentioned earlier, it is a bit too early to treat the OPERA result as firmly established.”

So we need to wait and see. No hurry to rewrite our textbooks!