Easier access to the processor (cache-focused designing). Read only memory (ROM) is for permanent storage of data within a system on chip (SoC) or other integrated circuit applications. ARM offers both via programmable ROM and diffusion programmable ROM, delivering maximum flexibility in design application. High-density and low-power ROM memories are suitable for BOOT code.

Accessing 3D. Once you reach a strong foundation, there is nowhere to go but up. Keeping this in mind, we have memory concepts trying to access the third dimension (3D) and keep the memory closer to the processor in order to increase data-processing speeds. Singh makes it simpler to understand with, “3D NAND takes today’s flash, which is built on a horizontal plane, and turns it sideways.”

Moving to 3D allows for a higher bit density in a smaller footprint while eliminating the limitation on lithography patterning.

Challenges still. SSDs are taking over the market, and very soon we might see the traditional magnetic disk only in old servers or as images. However, cost management is still a factor. “Due to high cost constraints of SLCs and MLC SSDs, end users from both commercial and residential sector prefer hybrid HHDs over traditional HDDs, along with low-cost TLC SSDs,” explains Samuel. 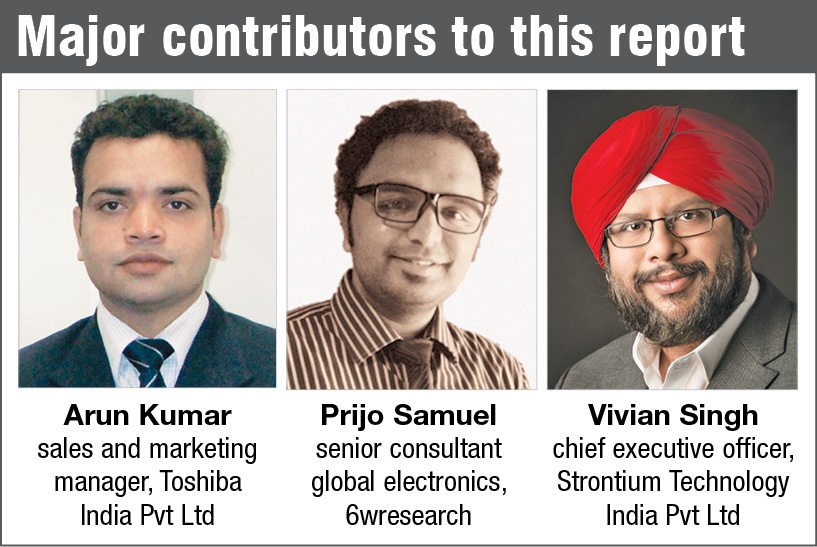 “With flash technology advancement from the beginning of SLCs, MLCs to TLCs and now 3D NAND, greater capacity flash storage would be a norm in the near future,” says Singh.

Stored data is constantly increasing and, by some estimates, the indexed Internet data will cross 1000 yottabytes (YB) very soon. This calls for similar storage options. Today, we have SSD memories that are compact, can carry higher data and are faster than traditional magnetic memories. Today is an era of information, and the highest storage options have to allow better analytics and success.