Impact on depleting water resources
There is also immense pressure on already depleting water resources due to vast installations of solar power plants. Water is needed in large volumes to wash solar panels as dust accumulation can affect the efficiency of solar panels, especially in dry areas like Gujarat and Rajasthan. These are states that have not only initiated solar power projects but also have huge installations lined up.

Industry’s response. Experts believe that there is an urgent need to attend to this problem since water is a scarce resource. There is a need to lay down normative water use and management standards for solar plants. 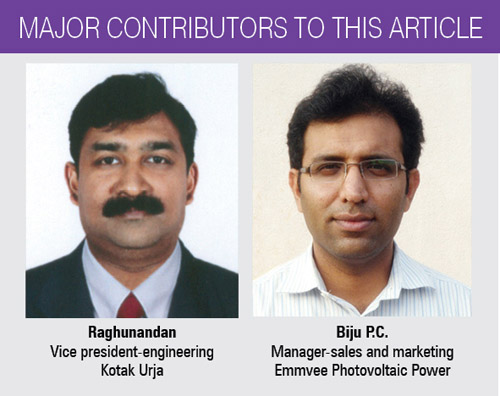 Though solar cells are far from being a zero-emission technology, this does not mean that PV solar energy should not be promoted. Environmental protection is a global concern, so manufacturers should pay attention to reducing or curbing the pollution levels by following international standards and protocols when a system’s total carbon footprint is calculated. A few solutions include:

Using the abatement system. As already pointed out, PV manufacturing processes produce hazardous solid byproducts and waste gases. These processes produce a mixture of toxic, reactive, ignitable and corrosive gases. In order to curb environmental pollution, hazardous gases need to be treated before being released into the atmosphere or water systems.

There are a number of solar cell technologies in use, some of which employ hazardous materials as basic constituents. The unutilised, non-consumed or unreacted gases (for example, in silicon-based technology, which uses gas) can be passed through an abatement system that works with the ‘dry’ or ‘wet’ method. This would help in neutralising the harmful effects of toxic gases.

Explaining the process, Biju P.C., manager, sales and marketing, Emmvee Photovoltaic Power, says, “In the dry process, the flammable gases are burnt with an external supply of gases like liquid petroleum gas (LPG) or methane to form a non-reactive ash. Here, the product is an oxide of silicon, which can be reused in the brick or glass industry. In the wet method, an external aid of other chemicals is required along with a mixture of water, which forms a non-reactive slurry of silicon oxide.

“Thus through these processes, other constituent gases also get converted into non-reactive/non-toxic gases with minimal quantity of nitrogen oxides. All these are released into the atmosphere following due industrial and pollution control authority norms. Similarly, during the manufacturing process of solar modules, all fumes emitted are passed through an abatement system and get neutralised in the process.”

Opting for green manufacturing processes. There are various solar companies that fall under the category of ‘zero emission’ and ‘green’ manufacturer, as permitted by the Pollution Board.

Raghunandan informs, “We have inhouse generation of solar power to back up the electricity requirements. We do not have any chemical process involved in our manufacturing. But packing is a major concern and we are working on it to reduce the emissions. For this, we have developed recyclable packing designs, which allow all our packing materials to be recycled 100 per cent. Thus, by improving the packing methods and complying to standards, one can drastically reduce the use of wood and paper.”

Opting for alternative cell technology. Crystalline cell technology has several alternatives, which are far better than conventional process technologies in terms of greenhouse gas emission. Laser-assisted processes and dry etching are prominent ones. Laser has become an indispensable tool for thin-film PV module production. With most thin-film materials, the layer scribing steps required for monolithic integration cannot be performed with the same flexibility and precision using any other process. This is why laser technology has been a key part of thin-film development for over two decades.

There are several laser-based processes currently used in solar cell manufacturing, or which have a high potential to be implemented in series production in the future. Among these are laser-edge isolation, laser-fired contacts, metal/emitter wrap-through and laser doping. These technologies come at a cost in terms of capital expenditure and also the watts per area produced. Many companies are using these technologies on a commercial scale for volume production.

As more companies begin to develop efficient solar energy collection technologies and higher purity manufacturing systems, the price of solar energy will become more competitive. However, solar energy’s economic and environmental benefits could be wiped out if thin-film manufacturers do not design, install and maintain pollution control systems to reduce harmful effluents from the gases released. In such a scenario, we will only be trading one set of problems for another.

Switch to solar energy inevitable
There are always two sides to a coin—while solar energy is considered the safest and most cost-effective renewable energy, its production process is energy-intensive. However, at the cell level the pollution is minimal and at the module level the pollution is negligible or near-zero. According to industry experts, overall, emission per tonne is the lowest among all the energy sources.

Opines Raghunandan, “If civilisation has to move into the twenty-second century, the twenty-first century has to be the century of clean power. Else, we will see devastation in the next 50 years. It is better to invest in solar power before we run out of fossil fuels.”

As per recent estimates, coal availability on a global average is expected to last only 60 years. The switch to solar energy is inevitable to save this planet and leave a cleaner world for future generations.

The author is an assistant editor at EFY. The article is reprint from January issue of EFY’s Electronics Bazaar magazine