Making low-power designs look easy
“The IoT and wearables are driving low-power chips with every vendor looking at different ultra-low-power benchmarks. Vendors are also trying to deliver chips that can work on harvested energy or can last on a single coin-cell battery for up to three years. This also fits into the trend of disposable devices like medical patches,” explains Praveen Ganapathy, director applications-processors, sales and applications, Texas Instruments India.

While batteries for sensor based products are usually designed for a low current supply, these face a higher processing load during operations like noise elimination from digital signals and floating-point calculations. Due to the current supply limitation, designers do not have the power to boost processing speeds by raising the CPU clock. The resulting long processing periods increase the power loss for the entire system.

The new STM32L0 ultra-low-power series from STMicroelectronics features a 32MHz ARM Cortex M0+ processor core and a 12-bit analogue-to-digital converter (ADC). “This new standard-bearer enables customers to design more competitive products that will both bring immediate cost and convenience benefits to end users and reduce worldwide consumption of disposable batteries,” said Vinay Thapliyal, MCUs marketing and technical manager, STMicroelectronics. With the ADC consuming just 40µA at a conversion speed of 100ksps, rising to just 200µA at 1.14Msps, in combination with the outstanding power efficiency of both the processor core and ultra-low-power peripherals, applications such as fitness trackers and domestic smoke detectors powered by non-rechargeable batteries will require less frequent replacements, saving both end user costs and the environmental burden of spent batteries.

The new RX231 group is for applications that require high processing performance in environments with low current supply capacity, with digital signal processing (DSP) and floating point unit. According to Renesas, it consumes only taking 0.8µA in standby mode while retaining the contents of both SRAM and CPU registers, and 120µA/Hz when the CPU is active with peripherals off.

Atmel’s new SMART 32-bit SAM L21 featuring an ARM Cortex-M0+ core consumes just one-third the power of comparable products in the market today (according to Atmel). How? Their SMART SAM G54/G55 has multiple clock domains to enable different parts of the MCU—the core, internal buses and individual peripherals—to be clocked individually to save power. If the maximum throughput of a peripheral is not needed in an application, the clock can be lowered. Individual clocks can be applied to different peripherals so these can be fully optimised with power consumption in mind. Throughput or feature requirement of the application is still fulfilled while power consumption is lowered.

Once Microchip’s PIC16F18877 is initialised in a system, core-independent peripherals can provide steady-state closed-loop embedded control with zero intervention from the MCU’s core. The CPU can then be idled or put into SLEEP mode to save system power. Microchip claims that PIC16F18877 is also the first PIC16 MCU to leverage Microchip’s eXtreme Low Power (XLP) technology with IDLE and DOZE modes for reduced active power consumption. Members of this family are ideally suited for applications that involve LED lighting and motor control like for wind direction, fan and flow control.

Security, now a base ingredient
In the wake of recent hacks like the Chrysler Jeep situation, the connected critical systems require security to be a base ingredient. SPC58NE is one among the first chips targeting automotive space, to come out on STMicroelectronics’ 40nm process, where security now extends to the hardware security module system, targeting E-safety Vehicle Intrusion Protected Applications (EVITA) Medium Class, which can be seen as an autonomous and isolated system, embedded into the MCU, handling all security operations.

For enhanced security, the RX231 group of MCUs provides AES encryption, a hardware based random number generator and unique device ID that can be configured to support advanced cryptology requirements.

The new automotive-grade S32K MCU lends SafeAssure functional safety to cars, which makes it easier to achieve system compliance with functional safety standards in automotive and industrial markets, while reducing the time taken to develop safety systems that comply with ISO 26262 and IEC 61508 standards. The MCUs also incorporate a Secure Hardware Extension compliant module that helps to secure communications and protect the integrity of sub-systems.

Broadcom’s BCM58100 comes with BroadSAFE architecture, which offers tamper protection and encryption as well as secure storage and processing of both card information and biometric user data such as fingerprints, irides, facial templates and more to safeguard against attacks. BCM58100 is compliant with Federal Information Processing Standard (FIPS) and also ensures that end products achieve stringent Payment Card Industry and Europay, MasterCard and Visa certifications for an added layer of security. 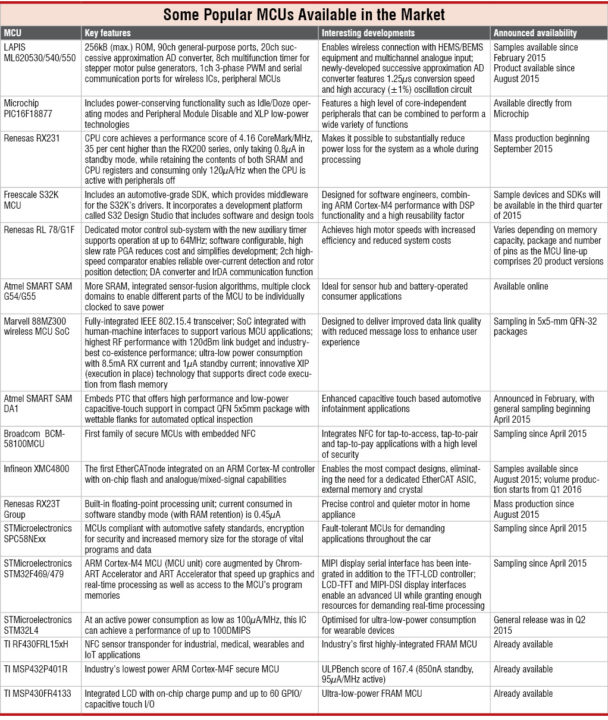 More support for communication interfaces
“Features for integrating into the IoT are also another area. For example, ARM Cortex-M7 is optimised for the IoT. You have support for real-time clocks since time-stamping is very important in the IoT. It was earlier done externally through SPI protocol. Communication interfaces in the wireless domain like Wi-Fi and Zigbee are being shown, too,” says Hemant Kamat, CTO at Shalaka Technologies.

“Many years back, we only had controller area network (CAN) integrated within the MCU. Nowadays, we have CAN, LIN and FlexRay integrated. Moreover, while we previously had to extend the number of CAN nodes by using external CAN, we can now do so from within the chip by making use of the multiple channels available. There is also a new generation called CAN Flexible Data rate (CAN FD) with variable data rate,” explains Girish K., project manager, Embitel.

Targeting the rapid growth of the IoT market, Atmel is combining its ultra-low-power SAM G series of MCUs designed for wearable and sensor-hub management, and their secure ultra-low-power SmartConnect WILC1000 Wi-Fi solution.

STMicroelectronics’s new SPC58NE is one among the first chips targeting the automotive space, to come out on STMicroelectronics’ 40nm process node. It combines multiple dual-issue cores with up to 6MB flash and 768kB internal RAM memory, eight CAN interfaces and an optimised peripheral set based on the end application. The multiple cores ensure redundancy in these applications to meet the safety and security demands of vehicle manufacturers.

Better peripheral and sensor integration
“More peripherals are being supported on the sensor side to monitor and control, while sensor fusion is now included to help in computing and amalgamating data from various sensors as well as for encryption. Some of these are LCD display controllers, HDMI interfaces, camera interface Mobile Industry Processor Interface and touch drivers,” says Kamat.

These are said to help in efficient processing of multiple analogue inputs (that is, from sensors) and operations requiring high oscillation accuracy such as mutual data communication between devices without the need for an external oscillator, making it possible to configure simpler systems. Specifically, this allows support for applications that utilise networks in the future, such as serial communication that enables wireless connection with HEMS/BEMS equipment and multichannel analogue input for motion, temperature, pulse and other biological sensors used in healthcare equipment, as well as conventional sensing and actuation that contribute to greater energy savings and convenience in today’s home appliances and electronics.

With capacitive now becoming almost a standard human-machine interface, the RX231 group from Renesas provides capacitive-touch-sensor capabilities equipped with Renesas’ second-generation Ca Touch technology. With support for up to 24 touch-keys for self-capacitance mode and up to 144 keys for mutual-capacitance mode, RX231 MCUs can support LEDs, buzzers and communication functions in more basic touch systems such as blood pressure monitors (typically nine keys) to systems with more elaborate requirements, like security keypads (19 keys) and ovens (25 keys). This functionality combines high sensitivity with a high level of noise tolerance, allowing use even when the panel is wet or when the operator is wearing gloves.

MCUs versus SoCs
Growing support for more peripherals, larger memories and smarter CPU features among MCU families show just how much the MCU has changed over the course of a decade. As the amount of integration increases, we see a blur in the line separating the MCUs from systems on chips (SoCs). “Moreover, technologies that were previously seen in microprocessors, like interfaces and power, are now increasingly being seen in MCUs,” explains Satheesh Kumar Murugan, project manager, Embitel Technologies.

“Security has become a key vector that gets integrated, with the Internet and cloud being a part of almost every device. Chips have had flash as integrated memory, but since the last year, we have had MCUs with embedded FRAMs. It lets us offer devices that can run on very low power. These are extremely fast, too. The integrated FRAM on the MCU eliminates the need for external EEPROM, while offering faster writes and flexibility in code and data allocation, thus reducing board space and cost, while enhancing performance and ease of programming,” adds Ganapathy.

Alexandru Voica, senior technology marketing specialist, Imagination Technologies, says, “A lot of the features previously available only for high-end CPUs are slowly but surely trickling down into the MCU space. Recently launched MCUs are getting DSP/SIMD functionality, virtualisation support and advanced security features. For example, our M-class M5150 MCU integrates all of the above, plus an MMU and cache controllers. This enables it to run a full-blown OS like Linux. M5150 is probably the most feature-rich MCU-class CPU IP available today.

Dilin Anand is a senior assistant editor at EFY. He is B.Tech from University of Calicut, and is currently pursuing MBA from Christ University, Bengaluru