In this article, we discuss various sensor technologies that are used in specific areas of consumer electronic products.

In electronics, whether you call it sixth or seventh sense, it is essentially the application of sensors with or without computer programs. Whether it is an invisible computer mouse, a blinkbot, a SixthSense device (invented by Pranav Mistry), a mind-controlled robot, a hand-gesture or a wirelessly-controlled robot, sensors have an important role to play. From smart beverage vending machines to smart home automation systems, from personal assistant robots to smart healthcare systems, from simple computers to digital assistants (like Alexa), from human wearable devices to autonomous vehicles, sensors are part of all these systems. As demand for consumer electronics grows, so does the market for sensors.

According to Webopedia, “Consumer electronics refer to any device containing an electronic circuit board that is intended for everyday use by individuals. This encompasses a massive category of electronics that includes televisions, cameras, digital cameras, PDAs, calculators, VCRs, DVDs, clocks, audio devices, headphones, tablets, smartphones and many other home products.”

One common thing between most consumer electronic products is the sensor component. A sensor could be a bare component, a module, active, passive, an input switch, wired or wireless.

As technology advances, sensors are becoming much smaller, affordable and are much more power efficient. We are witnessing a growing demand for micro-electro-mechanical systems (MEMS) and nano-electro-mechanical systems (NEMS) in the market. Modern sensor technologies enable manufacturers to use these in portable devices, smartphones, tablets, gaming devices, navigation and home appliances. Sensor technologies are also finding applications in smart home automation, security systems, robotics, automotive and health care, among others.

Technology trade shows like Consumer Electronics Show (CES), CeBIT and IFA are among the most popular and biggest trade shows in the world. Consumer electronics are the main attractions here. 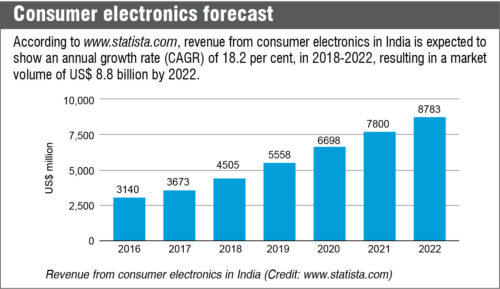 Let us look at a few examples where sensors are used in specific areas of consumer electronic products.

Then, there are sensors in home theatre systems that enable automatically turning on and off the television.

Smart home technology provides security, comfort, convenience and energy efficiency, by allowing you to control your home through smart devices and, often, a smart home app installed on your smartphone. Sensors in automatic doors, faucets, lightings, entertainment systems and appliances let you to control and monitor these in a smart way.

Coffee, tea and milk vending machines need to dispense enough milk or water as per the recipe. Apart from input switches, this is accomplished by filling up a secondary reservoir fitted with float and magnetic sensors. Signals through these sensors can be used to trigger other solenoids or pumps, which stop the main reservoir output and open the drain valve from the secondary reservoir to dispense the liquid into a cup. Smart features of vending machines include providing several cups of coffee with one press, and wireless control through mobile or computer network to control the amount of sugar, water, coffee and others.

Temperature of the indoor environment of the machine is monitored through the network, which adjusts the taste of coffee or tea according to specification. A counter is used to indicate consumption of coffee, tea and milk. The machine and the phone exchange data via Bluetooth. You can find various sensors in smart vending machines, including miniature flat pack, mountable and cylindrical.

With a smart security camera, you can monitor your home and premise from a smartphone when you are away or on vacation. Smart motion sensors identify the difference between residents, visitors, pets and burglars, and notify you if suspicious behaviour is detected.

A smart toilet features automatic flushing, automatic cleaning, water overflow protection, tank-leak monitor, health monitoring function to monitor your health by conducting a urine analysis each time you use the toilet and others.

Power consumption by lights and fans can be controlled using an automatic system employing IR or motion sensors. Toilet usage can be tracked using light indicators such as red for occupied and green for vacant.

Sensors can also track bathroom usage, occupancy and stock levels of amenities including toilet papers and soap dispensers. If no one has used the toilet for some time, the cleaning schedule can be adjusted accordingly. Sensors also help you maintain high levels of hygiene.

Smart homes have been witnessing innovations in the kitchen for a while now. Modern technologies are spreading to refrigerators, stoves and cooking utensils. Manufacturers are developing synthetic sensor-based devices to monitor kitchen sounds, vibrations, light, heat, gas, electromagnetic noise and temperature. Devices containing sensors are capable of determining precise tasks like checking whether a faucet is running, or a microwave door is open, calculating usage of paper towels from a dispenser and others.

You can find many sensors in a garden, including soil moisture, pH, temperature, light level, nutrient and humidity. These allow you to monitor the garden either on a smartphone or a computer.

A home bed monitoring system equipped with sensors logs your routine, daily activity patterns. This is particularly useful for the elderly or the disabled, living alone. If the activities deviate from the established pattern, the concerned person or caregiver can be notified. Feasibility of incorporating bed sensors as part of a wireless home monitoring system makes the system more flexible and versatile.

Integrated with sensors and Wi-Fi, smart thermostats deliver basic control of temperature settings, provide digital interfaces, energy savings, remote programming, geofencing, learning and alerts. It allows you to schedule, monitor and remotely control temperatures and remind you to change filters, among other things.

You can connect a lamp to a plug, replace hardwired switches, keypads and outlets with wireless sensors and then control these with a remote or smartphone.

In addition to this, smart lighting systems, such as Hue from Philips, can detect occupants in a room and adjust lighting as needed. Smart lightbulbs can regulate energy consumption based on the time of day.

Using smart locks and garage door openers, you can grant or deny access to visitors. Smart locks can also detect when you are nearby and unlock the doors.

Smart locks, like Schlage Sense, make life easier. Simply enter the access code to unlock the door instead of searching in your pockets for keys. Pairing the lock with your smartphone over Bluetooth is easy. It has built-in alarm sensors, and can sense potential attacks and issue alerts to you.

Some smart locks come with voice-operated features, too.

Modern vehicles are built with many sensors. As the technology advances, cars will be completely controlled by sensors and computer programs. Modern automobiles use controller area network (CAN) topology. CAN bus is designed to provide an efficient, reliable and economical link between various CAN stations, sensors and actuators.

Autonomous cars need hundreds of sensors including camera, radar and lidar. The global automotive sensor market, which features driver-assist features to entertainment systems, is projected to contribute billions of dollars in revenue. This is due to increasing demand of automotive sales along with proliferation of sensors in various applications, including MEMS sensors, artificial intelligence (AI) to safety and infotainment systems.

These are used in a variety of applications, from being incorporated into clothing or worn on the body as implants or accessories. Common examples are smartwatches, activity trackers and health monitoring systems. Wearable devices are also used in defence, research and retail shops. 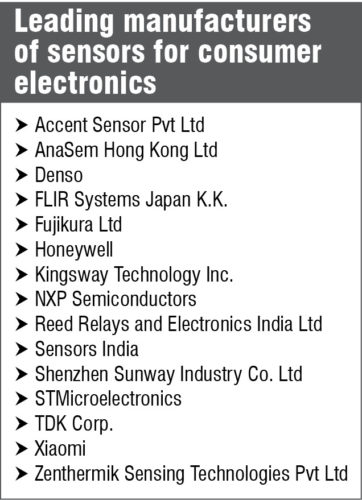 The sensor market for consumer electronics is expected to reach billions of dollars by 2022. Growing demand for consumer electronics like smartphones, tablets, televisions and wearable devices are the key factors driving this growth. Demand for devices for multimedia, motion sensing, navigation, security, surveillance, healthcare and gaming may provide further growth avenues.

Countries such as India and China are expected to contribute significantly to the growth of the sensor market in the years to come. New developments in sensor technology, such as small size and lower power consumption, add more demand for consumer electronics and fuel the demand in the global sensor market.