Z170X – Ultra Gaming: Get the Best of Storage, Looks and Performance

Mumbai, India – November 25, 2016 –The GIGABYTE GA-Z170X-Ultra Gaming is just the right motherboard for the gamer who wants to take advantage of the Intel®6th Gen Core processors and also, for a number of features exclusive only to high-end motherboards. Here’s a product carrying both U.2 and M.2 ports, each with the capability to operate at 32Gb/s and support the latest in NVMe storage, while completely supporting the latest in connectivity. A board that comes with Thunderbolt 3 and 100W USB Power Delivery 2.0 support. 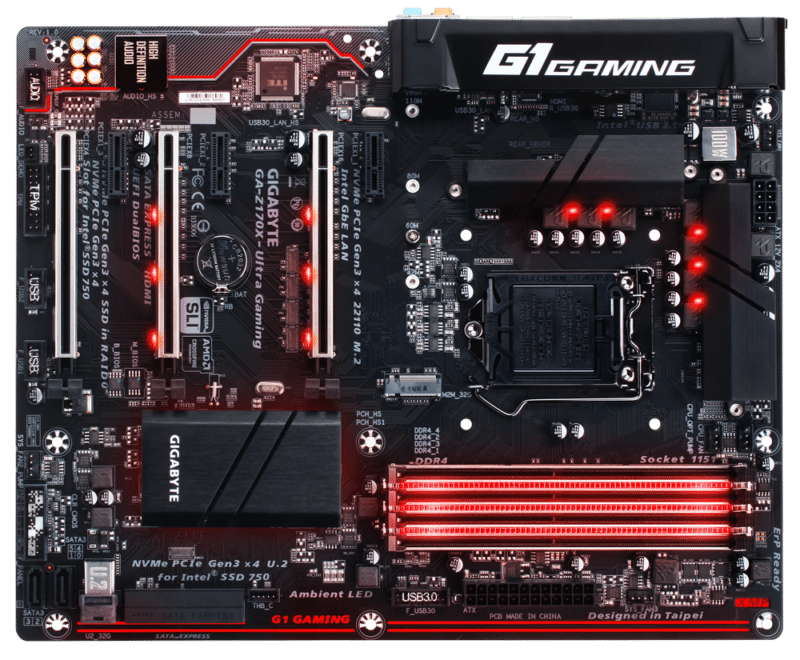 GA-Z170X-Ultra Gaming also gives users the ability to RAID NVMe drives via the U.2, M.2, and last PCI-E slot.

The Z170X-Ultra Gaming motherboard performs well, this is due to the fact it also utilizes the highest standard of components. With its 8-phase power delivery design it is more than able to cope with an Intel Core i7-6700K processor that’s pushing the limits. The 15u gold-plated CPU socket prevents corrosion and allows for optimal contact points. Among other premium parts the 10K rated capacitors, anti-rust rear I/O connectors, and anti-sulphur resistors are just some that make this motherboard a premium product.

The motherboard is also about looks and sleekness. It offers more LED customizations than ever, allowing users to truly adapt their PC to match their lifestyle. With a redesigned Ambient LED application, the user has complete control over the LEDs which surround the motherboard.

GA-Z170X-Ultra Gaming incorporates GIGABYTE’s novel UEFI that makes navigation richer and smoother, and also allows for better LED control – making it a perfect complement for the Windows O/S. This functionality and flexibility allows users to have the option to control their motherboard in the UEFI rather than Windows if needed, thus giving users more options and control over their system. To sum it up, GIGABYTE’s UEFI BIOS ensures more flexibility to users than ever before.

Using the NVMe protocol which takes advantage of the fast bandwidth of PCIe Gen3 x4 lanes (32 Gb/s), the drives are an apparent advantage for users looking to boot their OS faster, load their games in a flash and access large files without waiting. The new Intel 750 series SSDs offer an incredible increase in performance over SATA drives. By implementing the U.2 port onboard to support the 2.5″ Intel 750 Series drive, GIGABYTE ensures that you can benefit from the best performance.