Design Your Own Portable Spectrum Analyser

This low-cost portable spectrum analyser can be used to analyse the frequency content of input signals up to 5kHz. Frequency spectrum of an input signal possesses vital information, and the same has been employed for various applications ranging from engineering to biomedical, such as speech recognition, electrocardiogram (ECG) signal analysis, fault diagnosis of induction motors, music analysis and so on.

Analysing the spectra of electrical signals provides information about dominant frequency, power, distortion, harmonics, bandwidth and other spectral components, which are not easily detectable in time-domain waveforms. Spectrum analysers are quite expensive and might not be affordable for individuals such as students and electronics hobbyists.

The block diagram of the proposed low-cost portable spectrum analyser is shown in Fig. 1. Snapshot of the authors’ prototype using Arduino DUE board and test setup used for evaluation is shown in Fig. 2.

Table 1 lists the possible sampling frequencies available with Arduino Due board. These frequencies are selected using a pre-scaler value in ADCSRA register of an on-board analogue-to-digital converter (ADC). Resolution of the frequencies can be increased by either reducing the sampling frequency (fs) or by increasing the number of FFT points (N). Based on frequency resolution requirements of an application, suitable values can be selected by the designers. Table II lists the frequency resolutions for different combinations of N and fs. 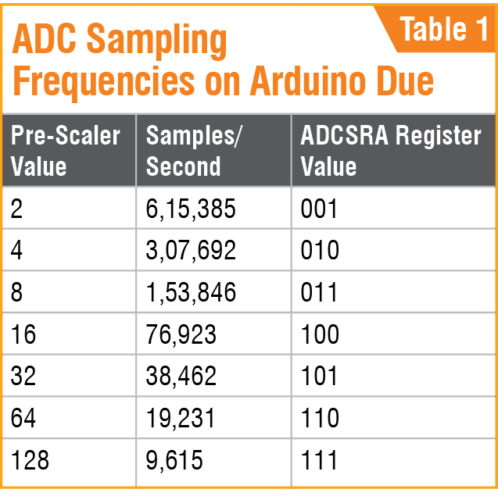 A function generator is used to evaluate a system by providing input signals at different frequencies and monitoring the variation in the frequency spectrum on the laptop. An input signal is given to one of the ADC channels available onboard. Arduino FFT library is used for Arduino Due board.

Processing code to view the frequency spectrum plot on the laptop has been designed using Processing software. Source program (FFT_acc_Vs_k.pde) written in Processing can be modified as per requirement.

Snapshots of the output screen for input signals with 1kHz and 2kHz are shown in Figs 3 and 4, respectively, using a 2048-point FFT with fs=9615 Hz.

This project can be easily extended for multi-channel spectrum analysis, as Arduino Due has twelve analogue input channels.

The steps for testing are given below.

4. Connect input from a function generator to Arduino Due pin A1. Make sure that ground is common and run the program/sketch. Output spectrum window will open and show the spectrum for the given input signal.

5. You can view the spectrum in the given range on x-axis, while y-axis shows amplitude of the input signal given at A1 pin of Arduino Due board.

Dr J. Manikandan is professor at CORI, and heads the VLSI and embedded systems domain of ECE department at PES University, Bengaluru