In the last four parts of this article we covered air defence warfare, electronic warfare (EW), under-sea warfare, strike warfare and air operations. In this concluding part, let us take a look at command and control (C2) operations as well as cruise control operations.

But presence of so many communication and detection equipment in the mast in interference. This requires certain systems to be turned off when another system is working. If the turned-off system is an important system, and if the enemy knowingly or by chance chooses to attack during this window, the result can be catastrophic.

Whatever may be the strength of force, it is only the right commands given at right times can make the force lethal. The commander who commands the carrier strike group (CSG) must know what is happening around him, the strengths and the weaknesses of the group.

For example, what will happen if the commander issues a command to launch a surface-to-air missile (SAM) when stocks of SAM have been exhausted? He must know the threats and his capabilities, and must be present in the carrier to command the CSG.

For effective command, the commander requires an efficient C2 system. Backbone of C2 systems is the communication systems that include voice links and datalinks.

The mast of the carrier is littered with numerous antennae—protected by radomes—for various communication systems and datalinks present in the CSG. Almost all sorts of antenna systems are seen in the carrier right from whip antennae situated in the flight deck to wire-fed fan antennae present above the superstructure. A plethora of communication systems operating at various frequencies and following various techniques of transmission could be found in the CSG.

Non-military radio communication is not secure. It is used to communicate with harbours, ships and aircraft of civilian or neutral origin. Non-military UHF systems can be used up to a range of 50km; all other band systems have the same range as that of their military counterparts.

In the latter mode, the CSG can keep on receiving the data that are sent to it. The great advantage is that the CSG can preserve radio silence. Because, the moment it sends an acknowledgement message, the enemy electronic support measure (ESM) systems can find the CSG’s location. Through this mode, the CSG can receive situational updates without revealing its position.

These tactical datalinks are the bridge between C2 systems of individual ships. Through these datalinks, Aegis ships exchange data between them and also with the carrier, so that overall C2 is maintained. 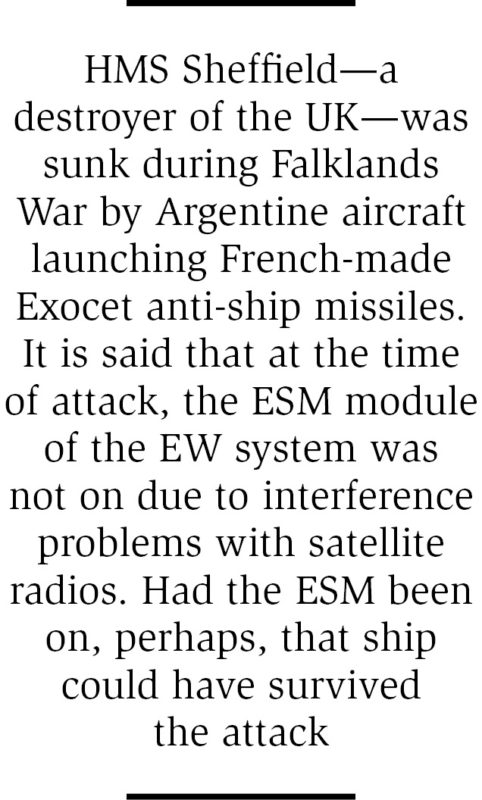