Electrolube’s Indian subsidiary solves an LED lighting unit potting problem, following consultations with the company’s UK based technical division. The resin encapsulation was causing an unacceptable colour shift in the light from an LED strip luminaire, and the UK technical team had little more than 24 hours to come up with a solution.

The Indian LED lighting systems specialist, Rockforest Technologies India Pvt Ltd, was recently contracted to supply LED strip lighting units for luminaires destined for a shopping complex in Bangalore, India. The specification stipulated that Rockforest’s LED lighting strips should provide a ‘neutral white’ (4,000K) colour and that the LEDs in the luminaires be potted in order to protect them from adverse environmental conditions.

Electrolube India conducted some initial trials, potting the strip luminaires to a specified depth of 5.5mm using Electrolube’s UR5634, a semi-rigid, optically clear polyurethane resin that is widely used for encapsulating LED lighting systems. With excellent protective and decorative properties, the UR5634 resin is also highly UV resistant, making it especially useful as an encapsulant for applications exposed to direct sunlight.

In this particular application the resin caused a colour shift from the LED array, from the specified 4,000K (neutral white) to ‘cool white’ (6,500K). Rockforest was under considerable pressure to solve this problem as the 4,000K colour was a non-negotiable specification; moreover, their customer requested that a new reference sample, which met the 4,000K colour specification, be made available for re-testing in just 24 hours. 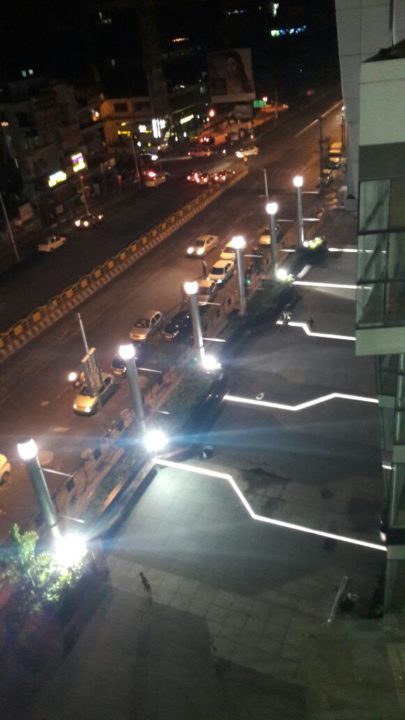 Electrolube India’s General Manager Padmanabha Shaktivelu, needed to act quickly in under 24 hours to help Rockforest meet this very tight deadline, so he approached Electrolube’s technical support team in the UK for advice. Responding immediately to Padmanabha’s request, the UK team suggested two different approaches that Rockforest might consider in order to solve the problem.

The first of these was a recommendation that they use an LED that provided a colour temperature below the specified colour temperature – in this case, one operating in the 2,500K to the 3,000K range. By potting these with the UR5634 resin to the specified 5.5mm depth, it potentially could bring the light back to the desired colour. The second option was that Rockforest assesses the amount and type of resin they were using for this project to see if a thinner layer of resin over the top of the LED array would reduce the colour shift effect.

Ultimately, Padmanabha Shaktivelu persuaded Rockforest to switch to UR5635, Electrolube’s semi-rigid polyurethane resin, formulated with a ‘hazy/cloudy’ appearance that is ideal for dispersing light. The diffused light produced by this resin meant that an additional diffuser medium was no longer necessary, allowing the customer to achieve the required aesthetic appearance and, through trials with various resin potting depths, the correct colour temperature. During these trials, the rapid gel time of UR5635 caused a complication but Padmanabha solved this problem by suggesting a staged potting procedure.

“Time was not on our side when we made the discovery of the colour shift from these potted LED units. Our client needed a rapid solution, so we turned to Electrolube India and Padmanabha Shaktivelu’s help was instrumental in achieving the tight turnaround demanded. Electrolube’s UK technical team pulled out all the stops to help us find a solution, the switch to UR5635 proving especially successful as it avoided the need for an additional diffuser medium, thereby saving costs for our client.”

Electrolube Managing Director, Ron Jakeman, commented: “At Electrolube, we have branded ourselves as the solutions people because it truly resonates with everything that we strive for in terms of product innovation, customer service and technical support. The solution we suggested for Padmanabha, our General Manager at Electrolube India, and the customer, Rockforest, demonstrates how effective collaboration between our international partners and the UK-based technical team can deliver timely results for our worldwide customer base. We now have a brand new manufacturing plant in India and are represented in over 50 countries, which enables us to provide all our customers with genuine security of scale and a robust global supply chain, so when the unexpected happens, we’re more than capable of delivering a truly unique service anywhere in the world. Together with our expansive product portfolio, our value-added services enable customers to find successful solutions for all their production needs.”

There are several requirements for protection compounds within LED applications. Typical examples include optically clear compounds for protecting the LED itself and thermally conductive materials to help dissipate heat away from the LED array or LED lighting unit. Other necessary properties are UV resistance, colour stability of the resin and minimal colour temperature shift of the LED.

In this instance, Electrolube’s UR5635 was the perfect LED protection solution for the customer. UR5635 is a two-part, semi-rigid polyurethane resin which has been formulated to have a light diffusing effect. Due to its cloudy appearance and unique capability to diffuse light, UR5635 has been well received by manufacturers as an effective and reliable LED resin for both decorative and protective applications. It exhibits outstanding water and weather resistance, as well as excellent resistance to acids and alkalis making it suitable for a wide range of environments and an extremely durable potting compound. UR5635 is also resistant to UV light, making it especially useful as an outdoor LED encapsulant or for use in other applications where it may be exposed to direct sunlight.