AMD showcased its continued leadership in high performance computing (HPC) by powering the fastest and the most energy efficient supercomputers in the world, according to the latest Top500 and Green500 lists.

Oak Ridge National Laboratory’s (ORNL) Frontier system submitted its very first score to the Top500 list of 1.1 exaflops, making it the world’s fastest supercomputer and the first to break the exascale barrier. Frontier’s performance is more than double the number two system and greater than the sum of the next seven systems on the latest Top500 list.

In addition, the Frontier test and development system (TDS) secured the top spot on the Green500 list, delivering 62.68 gigaflops/watt power-efficiency from a single cabinet of optimized 3rd Gen AMD EPYC™ processors and AMD Instinct™ MI250x accelerators. Finally, Frontier’s mixed-precision computing performance clocked in at 6.86 exaflops, as measured by the High-Performance Linpack-Accelerator Introspection, or HPL-AI, test. Next steps for Frontier include continued testing and validation of the system, which remains on track for final acceptance and early science access later in 2022, and open for full science at the beginning of 2023. 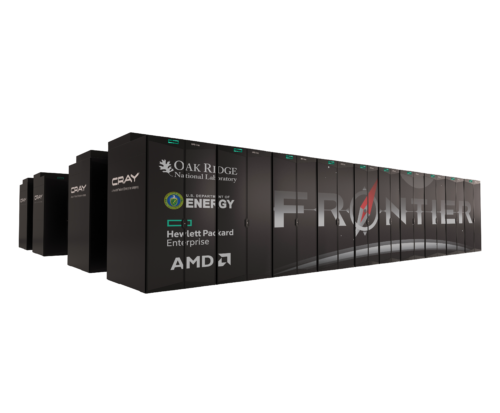 In other AMD EPYC and AMD Instinct MI200 systems, CSC’s LUMI supercomputer is third on the Top500 list with 152 petaflops of performance and third on the Green500 list with 51.63 gigaflops/watt power-efficiency, and the Adastra system at GENCI-CINES is tenth on the Top500 list and fourth on the Green500 list. These systems continue to highlight the performance and efficiency capabilities of the AMD Instinct accelerators at a node, cabinet and system level.

Additionally, the Top500 and Green500 lists showcase the rapidly growing preference for AMD solutions across the HPC industry. On the Top500 list, AMD powers 94 total systems, an increase of 95% year-over-year, and AMD Instinct MI200 accelerators made their first entry to the Top500 list with seven systems. The performance number delivered by this single generation of AMD Instinct based systems on the Top500 list almost equals the combined Flops of the rest of the 161 accelerated system on Top500

On the Green500 list, AMD EPYC processors and AMD Instinct accelerators now power the four most efficient supercomputers in the world. Beyond that, AMD products are in eight of the top ten, and 17 of the top 20 most efficient.

“The Frontier supercomputer, powered by AMD and HPE, represents a massive step forward for both science and for the HPC industry,” said Bronson Messer, director of science, Oak Ridge Leadership Computing Facility. “Our collaboration with AMD has been critical for us to ensure that we deploy the world’s leading platform for computational science. The Frontier supercomputer taps into the combined performance of enhanced AMD CPUs and AMD Instinct accelerators, along with an enhanced AMD ROCm™ 5 open software platform, to deliver the performance researchers need to carry out scientific research for the good of all mankind.”

“LUMI, one of the EuroHPC world-class supercomputers and leading platforms for artificial intelligence, is built with leadership environmental sustainability and performance in mind,” said Pekka Manninen, Director of the LUMI Leadership Computing Facility, CSC. “AMD EPYC processors and AMD Instinct accelerators enable us to reach our most ambitious scientific research goals while at the same time meeting and exceeding the EU’s most stringent climate targets. We are extremely proud of our third-place position in the Green500 list, achieving 51.63 gigaflops/watt power-efficiency.”

The AMD Instinct and ROCm ecosystems offer customers support for key applications in HPC, AI and machine learning as well as HIP and OpenMP® programming models, compiler toolchain and analysis tools for scientific and industrial applications. Additionally, the AMD Accelerator Cloud provides an environment to remotely access, evaluate and get the most out of AMD Instinct accelerators and ROCm software.

HPC in the Cloud