An unmanned aerial vehicle (UAV) or drone is an aircraft without a human pilot aboard. Components required for its design depending on type. There are different types of drones depending on technology and application. Applications include civil, commercial and military. While Chinese DJI is a leading manufacturer of commercial and civilian drones, many other people/companies around the world are also developing drones. Hence, there is no comprehensive list of drone systems.

Most common drones have two units: transmitter and receiver. The receiver unit consists of the drone, and the transmitter unit is normally a ground-based controller system using which the user can send commands (operations to be performed) to the drone.

The transmitter is first calibrated and tested using commands, which the drone has to perform. There may be drones that do not require the traditional remote transmitter unit. Flight of the drone may operate with various degrees of autonomy, either under remote control of a human operator or autonomously by onboard computer.

Given below is a list of common components used in drone design:

There are mainly three types of drones: tail-less multi-copter, tailed mono- and bi-copters, and fixed wings. Quadcopters are the most popular multi-copter drones. Drone body shells for these are available in various online stores.

There are different power sources for a drone, including battery, solar, hydro fuel cell, combustion engine, cable-tethered power supply and laser beam power. The most common source of power is a lithium-polymer battery.

These include digital electronic speed controllers linked to engines, propellers, servomotors and others.

Various sensors are used in a drone as per requirement and application. Position and movement sensors give information about the state of the aircraft. Common sensors are laser, radar, camera, gyroscope, accelerometer, compass, barometer and GPS receiver.

Flight stack or autopilot software are used in drone applications. Open source software like ArduPilot, OpenPilot, Paparazz and others are easily available.

Also, there are many smartphone apps available for drones.

Most drones use radio frequency to communicate between the remote and the drone, which may be capable of autonomous or semi-autonomous operations. Remote control signals from the operator side can be issued from one of the following:

There are many websites for hobbyists to start with drone design using Raspberry Pi and Arduino. For Raspberry Pi, you may refer to this website. 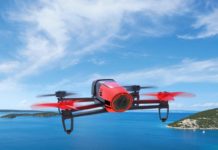 How To Build A Quadcopter? 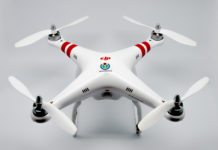 The Anatomy of a Drone For Beginners 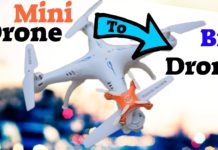 DIY: How to Make The World’s Smallest Drone Bigger!