Amol Kadu, regional manager-west region, Scientech Technologies Pvt Ltd, says, “Our main principle has always been to make students feel that engineering is not rocket science, by providing them with equipment that make their life easier while studying. These equipment are aimed to help teachers and students grasp the subject effectively.” He adds, “We are also upgrading our oscilloscopes that can be used as ATE rather than just conventional oscilloscopes. Our DesignLab is the first breakthrough in this segment of ATE.”

Anritsu has partnered with Elliptika to come up with a product called Eductika, which is a microwave teaching kit for students at colleges and universities. Anritsu’s VNA Master series of handheld vector network analysers is part of this solution, which can be utilised by academicians to enlighten students on fundamentals of RF and microwave technologies. This mostly serves the market outside India. For Indian market, Anritsu has developed an RF and microwave trainer kit in association with Foundation for Innovation and Technology, IIT Delhi.

New entrants in T&M equipment for education
There were quite a few industry-specific products released in the last one year, also suitable for academia and specifically just for educational institutions and universities. Select products have been talked about in detail below.

All-in-one instruments. There is a whole set of people designing circuits and systems, and making measurements with the help of benchtop instruments. Six months back, with the intent of making benchtop instrumentation easy, NI came up with a product called VirtualBench (refer to table for more information). “Even though technology has changed in different areas of automated test, advancements for benchtop measurements have been very limited,” feels Mohanram. VirtualBench is a combination of a function generator, oscilloscope, digital multimeter, high-speed logic analyser and power supply integrated into a single equipment, programmable using LabVIEW. There is also an option for users to not program the device by simply using it as a plug-and-play instrument via USB or Wi-Fi connectivity.

With a ready-to-run application for Windows based PCs and iPads, users can control and view all measurements on the device’s screen. Mohanram informs, “For the industry, it enables a generation of signals and measurement on a single device rather than having multiple instruments for multiple tasks. For academia, VirtualBench is available at a relatively lower price, which has helped a lot of electronics labs re-look at their current set-up and replace their existing box-type instruments.” He adds, “This is one instrument that is helping academicians change the way they have been doing measurements in electronics, or any lab for that matter.”

Scientech’s PC based instrument, DesignLab, looks to make it easier for students with a seven-in-one equipment, which has a digital storage oscilloscope, function generator, 16-channel logic analyser, pattern and word generator, and variable power supply. Kadu says, “DesignLab helps students and professionals to have hands-on experience, realise proof of concepts and their projects.” He adds, “Educational institutions, like IITs, NITs and some other engineering and polytechnic colleges, are users of Scientech products, as we have solidified their trust in our products over the years now.” 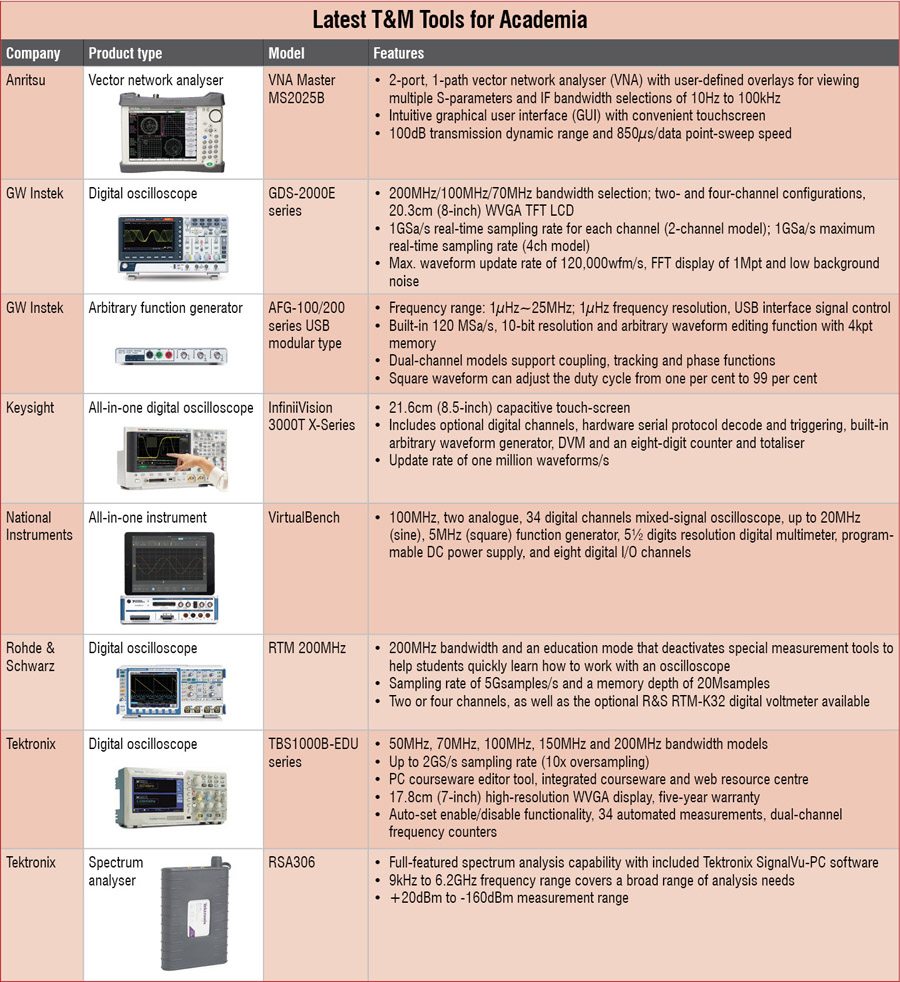 Benchtop digital oscilloscopes. Keysight has some new introductions where they feel that the improved user interface will allow students to use the instrument in a much more effective manner. Pathy says, “We have introduced a scope called 3000T with a much better user interface.” These 3000 X-Series oscilloscopes (refer to table for more information) are touted to be perfect for teaching labs as these come with a choice for arbitrary waveform generator (AWG), function generation, digital channels and a touch-screen enabling students to swiftly master the operation of the scope, just like their mobile phones or tablets. For academia, these oscilloscopes offer an X-Series education kit (option EDK) that combines 11 built-in training signals with documented hands-on labs, teaching students how to operate and master modern oscilloscopes.

The RTM 200MHz oscilloscope (refer to table for more information) from Rohde & Schwarz targets universities and training institutes. It features a training mode that disables specific measurement automation functions to push engineering students to explore results on their own and learn how to handle more basic measurement functions. It is also suitable for general-purpose measurement tasks in R&D, manufacturing and maintenance.

Teaching labs/design suites. Talking about teaching labs, Pathy informs, “On the digital communication side, we have introduced a new teaching lab that educates students on digital modulation/demodulation techniques.” He adds, “For instance, consider a GSM phone. What does a GSM signal look like? The teaching lab focuses on such aspects.”

As mentioned before, Anritsu has developed an RF and microwave trainer kit with Foundation for Innovation and Technology, IIT Delhi. Madhukar Tripathi, senior manager – marketing and channel sales, Anritsu India Pvt Ltd, informs, “This kit contains many passive components that are tested using Anritsu’s vector network analyser (VNA). This gives a good overview for students to learn about real telecom components and their behaviour.”

Traditionally, if somebody has to design a communication system, he or she has to go through a very tedious process of coming up with an algorithm. Mohanram says, “In India, due to lack of tools that can take those algorithms on to a physical hardware, a lot of research would get stuck at theoretical level. LabVIEW communication system design suite is one tool that helps take those designs, whether an algorithm written in language C or LabVIEW, directly to a hardware and validate the designs very quickly.” It also helps people convert and optimise some of the algorithms for FPGAs, wherever required.

The hardware known as the universal software defined radio along with LabVIEW communication system design suite together have helped academicians, who are researching or learning concepts in communication, to go leaps and bounds from their theory, putting all of it to practice, claims Mohanram. He says, “This is another interesting product that we have launched recently, which is now being used across academia and industry for learning, researching and implementing radio communication.”

Initiatives by T&M vendors for academia
On the semiconductor side, government has recently approved setting up of two semiconductor fabrication plants (fabs); one in Gujarat and the other one at Noida, informs Pathy. He says, “We are actively engaged with Tier I institutes, such as IIT Gandhinagar, that are close to the new fab ecosystem.” He adds, “We are helping students with courses. For example, there is one credit course that is developed and conducted by a technical person from Keysight.”

Anritsu too conducts workshop seminars in engineering colleges and universities, and updates students with recent technological advancements. Tripathi says, “These sessions are followed by hands-on, live demo of products.”

Keysight is also playing the role of an enabler in connecting some of the engineering colleges with the industry. Pathy says, “For example, R.V. College of Engineering in Bengaluru has set up a wireless lab. But by simply buying tools and providing training, it is not necessary that the students would be job-ready. Therefore we are trying to bring industries in and around Bengaluru to start interacting with faculty of the college.” For the industry to interact, there must be good infrastructure support available, like at R.V. College, which motivates them to start such an engagement. He adds, “From a college perspective, the very same interaction can also help the faculty to know some of the R&D programmes that these industries are into and general technology trends. Students are also given an opportunity to interact and understand job requirements in this industry.”

Talking about National Instruments, Mohanram says, “We have always been doing hands-on workshops that happen almost on a weekly basis at our office, and these can be attended by both industry and academia before these take on the product and start using it.”

Keysight has made significant investment into their R&D facility in India. Pathy says, “With our R&D team’s help, we are able to offer a six-month student internship programme. This is targeted at students in the PG curriculum.” He informs, “The student has access to our equipment and tools, and is also mentored by our R&D team. There is a sense of learning and contribution at the same time, as the student is involved in an active project.”

T&M products that are there in the market help people measure and relate to what they learn. Today, T&M vendors are playing a significant role in making sure that students and academicians learn the concept they hear about very effectively using their tools.