3D Printing: Out of This World and Into Your Bodies

Will 2015 be equally exciting for 3D printing
3D printing is a broad umbrella term and there have been a lot of separate developments throughout the field. Broadly speaking, Pai predicts that 2015 will see an explosion of different materials and techniques being used in conventional 3D printing—composites, metals and new polymers. He says, “I also see low-cost SLA technology playing a larger role as prices drop, making it more affordable.” He adds, “The immediate benefit of these developments will be to product designers and developers, having the ability to prototype and test their models with a number of different materials.”

Emergence of more unusual applications of 3D printing could be expected in coming years. For instance, food industry is quickly endorsing 3D printing. Datla says, “Two kitchen-ready 3D food printers have already been presented at a trade show. These machines can print sugar, chocolate and candy in any imaginable design.”

The next phase would also be to make metal 3D printers more cost-effective. Rodagi says, “3D printing saw a boom when people had access to low-cost thermoplastic 3D printers. Now, imagine the implications of a low-cost metal 3D printer.”

Multiple-material printing would be another upcoming area. Datla says, “It will become possible to use a wider range of materials for 3D printing.” Multi-material 3D printers for various requirements of colour, elasticity and strength, and printers for electronics and optics are beginning to appear. He adds, “Combining new materials, nano-scale dimensions and printed electronics, new products with previously unimaginable properties will emerge.”

Aakash, founder and CEO, Aha3D Innovations Pvt Ltd, believes that fused filament fabrication (FFF) is firmly established as the most popular 3D-printing technology. He says, “It will continue to grow, largely because of its popularity and push from material innovations.”

“Currently, there is a huge gap between FFF and high-end SLS printers in print quality as well as price standard, which has brought new innovative technologies like stick deposition moulding (SDM) with anti-slip mechanism to bridge this gap,” informs Vinay Sharma, director-technical, ni logic Pvt Ltd (ni2designs). SDM gives a more accurate dose control and better precision. He adds, “A combination of such innovative improvisations in low-cost printers with advanced printing software, like Netfabb, can ensure professional-grade prints in the mid segment.” 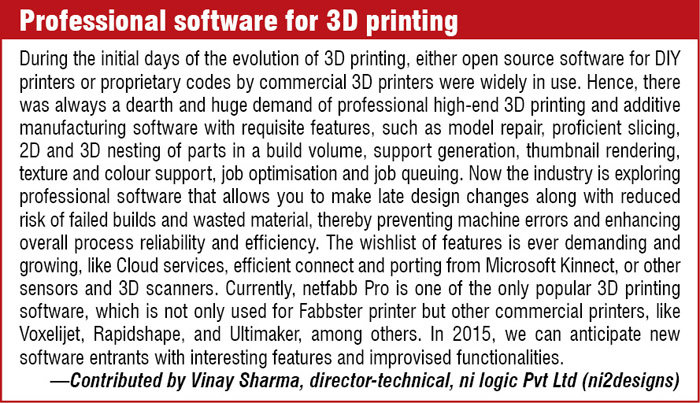 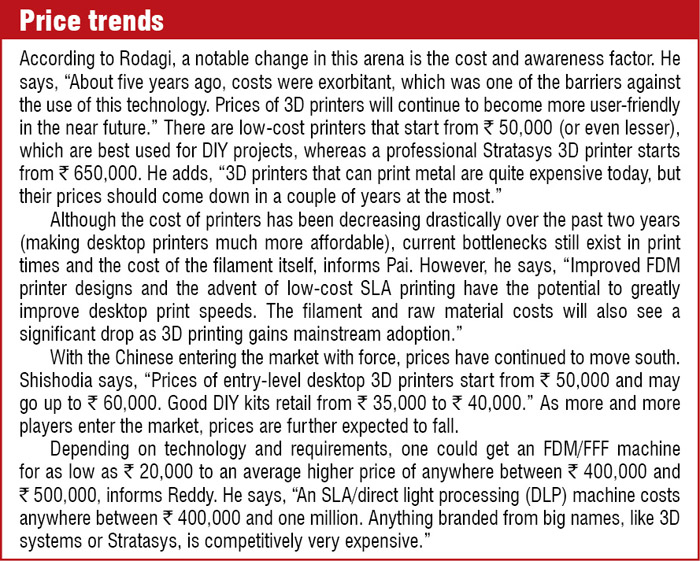 2015 could also see more commercialisation of 4D printing. This technology will entail numerous applications. Datla shares, “Examples include appliances that can adapt to heat and improve functionality or comfort, childcare products that can react to humidity or temperature, and clothing and footwear that will perform better by sensing the environment.” He adds, “4D printing makes it possible for objects in hard-to-reach places, such as underground water pipes, to expand or shrink depending on water flow, thus avoiding the need to dig to exchange pipes.”

With advancements in 3D bio-printing, the ability to synthesise and customise living tissue will likely revolutionise the field of medicine and prosthetics. However, Pai says, “These advancements could also give rise to a number of moral issues, which will need to be resolved as they arise. Either way, the next few years promise to be interesting.”

3D hubs and print shops can be expected to open everywhere, from primary schools to homes to industrial houses. “3D printers will become extremely versatile machines to be used in all walks of life. Further, networked 3D printers may enable users to detect and better utilise spare capacity,” says Datla.

3D printers are the next big thing
The impact of 3D printing on technology and everyday life will be unprecedented. “The remarkable possibility of widespread domestic use of this technology has tremendous potential to change the way goods are obtained, designed and innovated,” says Datla.

Technically, a patent expired in January 2013, which unlocked a high-resolution 3D-printing technique using light/laser, informs Reddy. (A patent is usually valid for 20 years and, after expiry, it becomes open source and free for access to anyone.) Many patents in 3D printing have already expired, or will soon expire, and this will enable even faster development and proliferation of 3D printers.

3D printers are the next big thing in the field of technology, feels Shishodia. He says, “The day is not far when we will all have a 3D printer on our desktops, as we have normal printers.” Reddy too feels that a 3D printer would be in every home, like a computer, within the next ten years.

Aakash shares, “General acceptance of 3D printing, along with its limitations, has found a place in the minds of consumers.” It can be comparable to the acceptance and popularity of dot-matrix printers. He adds, “Digital manufacturing will only get bigger in the future.”