“Indian Regional Navigation Spacecraft System (IRNSS) is the Indian navigation system that envisages the establishment of the regional navigation system using a combination of geostationary orbit (GEO) and geosynchronous orbit (GSO) spacecraft,” reads Indian Space Research Organisation (ISRO) website on self-reliance with an indigenous navigation system.What does this mean for the common man?

We open Google Maps application on our phones and search for a place. The signal travels all around the world, to the GPS control station in the USA. Processing takes place at their end and, after some deliberation on their part, we receive certain co-ordinates. This takes some time.

Also, according to conspiracy theorists, security agencies get to know if you access anything disconcerting. With IRNSS, the time to access is expected to be much lesser and the said theorists can feel a bit safer, as this information will now be processed by Indian agencies. 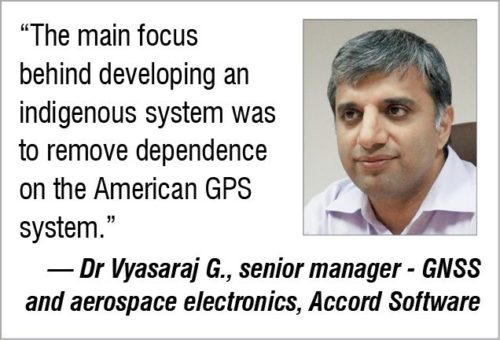 “It was back in 2003 that the project was beginning to take form,” recalls Dr Vyasaraj G., senior manager – GNSS and aerospace electronics, Accord Software. “The main focus behind developing an indigenous system was to remove dependence on the American GPS system.

After the announcement of the project we were to design simulators that could simulate the perfect environments for testing the satellites, and this began the race for development of IRNSS receiver modules.

By 2008, project details were finalised and the expected date for the system to go live was set to end of 2015, with the first satellite being launched in 2011, and the next every six months.  After a delay in the original timeline, the first satellite, IRNSS-1A, was launched on July 1, 2013, and the others followed suit. The last satellite, IRNSS-1G, was successfully launched on April 28, 2016, from Satish Dhawan Space Centre (SDSC), SHAR, Sriharikota launch site.

The proposed system consists of a constellation of seven satellites and a support ground segment. Three satellites are located in GEO and the other four in inclined GSO. Such an arrangement means continuous radio visibility at all hours for Indian control stations. 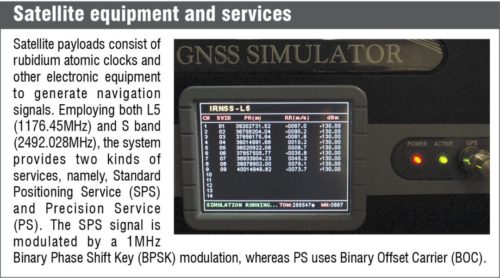 “We typically have two signal frequencies to overcome the problem caused by disruption in the signal, which is caused by the ionosphere. This increases the size of the module due to the integration of two separate antennae for the two frequencies. Hence, a solution is to use a single antenna, meaning, a single frequency being used for navigation. Using a single antenna causes very low accuracy and can show a position difference by 10 metres to 15 metres.

“Addition of a second signal reduces this to about five metres to eight metres. Hence, a system integrator could decide on designing the system to reduce system complexity with a single antenna system for low-accuracy needs or placing two antennae for high-accuracy needs,” says Dr Vyasaraj on using multiple-frequency signals for location tracking.

Before completion and launch of satellites, there is the need for testing the design parameters and the functioning modules. Design simulators have helped play a huge role in this stage of the development. “We have a simulator from Accord Software capable of generating and measuring signal conditions upon reception. The device hardware is compatible with American GPS, Russian GLONASS, Indian IRNSS, European Galileo and Chinese Bie-Deu/BDS.

“The simulator also has support for several SBAS systems. We can modulate and test signal parameters during various stages of transmission. The simulator generates signal distortions similar to the actual conditions and gives results, which can help fine-tune GNSS equipment,” says Dr Pratibha B.A., project leader at Accord Software.

For field-testing purposes, there is a portable version of the device, which has an RJ45 interface for connecting to a computer system. The device can be controlled by a computer application loaded with custom firmware. The portable simulator has the same features as the other device with the added benefit of a compact design.

Along with simulators, development of an IRNSS-compatible receiver is also underway. G3I, a credit-card-sized receiver chip, with support for IRNSS along with other constellations, is currently under development.