As only 17.4 percent of e-waste was collected and recycled in 2019, it resulted in a loss of nearly $47 billion in recoverable materials including gold, silver, platinum, and other high-value materials. 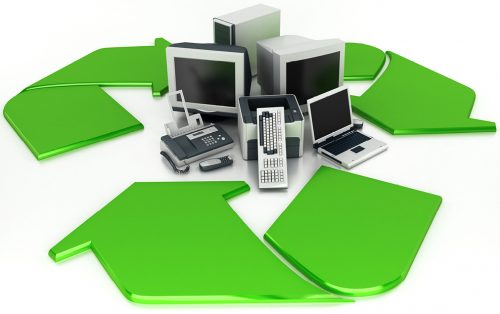 If it was not for evaporation, humans would have suffered from lack of potable water. Nature, as a matter of fact, knows the importance of a circular economy better than us humans. Ranging from metals to water to crude oil, it tries to replenish any and everything we use. But have we been able to understand how critical circular economy is?

A circular economy, in simple words, can be explained as a systemic approach to economic development designed to benefit businesses, society, and the environment. In contrast to the ‘take-make-waste’ linear model, a circular economy is regenerative by design and aims to gradually decouple growth from the consumption of finite resources.

“The biggest benefit of recycling is that you will not have to do so much mining. You are essentially offsetting the impact of mining on nature by enabling a circular economy in electronics,” says Pranshu Singhal, founder of Karo Sambhav. He is an electronic waste PRO offering solutions for e-waste management and EPR services in India.

Niti Ayog, the public policy think tank of the government of India, has made the first move and entrusted the Ministry of Electronics and IT (MeitY) to formulate a plan that would encourage India to work better around the e-waste it generates. The move comes on the cusp of the fact that India is the third largest consumer of raw materials produced globally and would be consuming nearly 15 billion tonnes of material by 2030 with the current economic trends.

“We have really made a good start. Not a lot of countries have legislations identifying the problem of e-waste and trying to solve that problem. It is good to see the current government understanding that there is a problem, and it needs to be addressed. In terms of e-waste, there is a long way to go, but with the right policy and implementation, India has the ability to become a superpower in terms of recycling and enabling a superior circular economy around e-waste,” says Karan Thakkar, founder of EcoCentric—a recycling company headquartered in Mumbai. 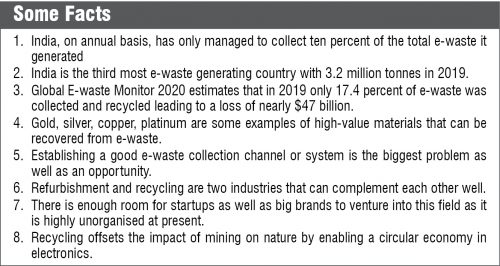 In terms of elements used in manufacturing electronics, the rate of extraction of abiotic resources including iron, copper, silver, gold, aluminium, manganese, chromium, and zinc along with various other rare earth elements, is significantly higher than the rate of their formation in nature. The simplest of supply and demand laws state that anything that has more demand than what can be supplied tends to get on the expensive side. This might simply spell that businesses and end consumers will have to pay more in order to source electronics and components as the raw materials used to fabricate them start to become scarce.

However, the key to reversing this trend might be hiding in plain sight under two terms, namely circular economy and recycling. We should not forget that business opportunities around recycling and circular economy are mammoth, and these also possess the capability to help nature replenish elements and stay healthy.

Before we take a look at the possible e-waste business opportunities knocking on the door, it is important to understand how much and what kinds of waste the country, as well as the world generates. As per Global E-Waste Monitor 2020 report, India generated 3.2 million tonnes of e-waste in 2019, ranking third after China who generated 10.1 million tonnes and the United States that generated 6.9 million tonnes.

The rest of the world, as per the same report, generated a striking 53.6 million tonnes of e-waste, an average of 7.3kg per capita in 2019. The growing amount of e-waste is directly linked to higher consumption rates of electric and electronic equipment (EEE) manufacturing, short product life-cycles, rapid technological advancement, and few repair options. Asia generated the highest quantity of e-waste in 2019 at 24.9 million tonnes, followed by the Americas (13.1 million tonnes) and Europe (12 million tonnes), while Africa and Oceania generated only 2.9 and 0.7 million tonnes, respectively.

However, India collected just 10 percent of the electronic waste (e-waste) estimated to have been generated in the country in 2018-19 and 3.5 percent of that generated in 2017-18, as per a recent report by the Central Pollution Control Board. During 2018, e-waste collection was just 3.1 percent in India.

“Rural India has just started consuming electronics and the size of rural India is much bigger than that of urban India. The amount of e-waste this section of the country will start generating two to three years down the line will be much more,” says Karan.

If current economic trends persist then India’s material requirements, as per Niti Ayog, are projected to be nearly 15 billion tonnes by 2030 and little above 25 billion tonnes by 2050. For India to fulfill its resource needs, it is imperative that we follow circular economy approach rather than the current linear economy principle of take-make-dispose. The significant gap between the waste generated and the waste collected is evidently clear from the reports but what’s even more clear is the business opportunity e-waste offers.

“I see e-waste just like any other industry where there are business opportunities at every juncture. Right from the start of manufacturing a component to supplying the end product to a consumer, there is opportunity in all the parts of the supply chain of electronics,” explains Karan.

He adds, “There are various opportunities at each juncture of the electronics supply chain as well, and these can be very big!”

The FICCI Circular Economy Report, 2017 outlined that the business opportunity for extracting gold from e-waste is to the tune of $0.7 to $1 billion. It is worth noting that one tonne of ore has an extractable reserve of about 1.4gm gold while a tonne of mobile phone PCBs can yield about 1.5kg. Global E-waste Monitor 2020 estimates that in 2019 as only 17.4 percent of e-waste was collected and recycled, it resulted in a loss of nearly $47 billion in recoverable materials including gold, silver, copper, platinum, and other high-value materials.

“The government has covered 21 categories under the electric waste rules. As of now, there are categories beyond the ambit of ones that have already been covered. The NITI Ayog paper has recommended covering all the left categories under the e-waste rules,” says Pranshu. “Plastics and regular metals form the main part of e-waste. Then some categories also contain precious metals like gold, silver,” he adds.

The very first opportunity offered by the world of e-waste starts with an efficient collection process. It is mandated by law that sellers of electronic goods like smartphones, smart TVs, CFL bulbs, and most other consumer electronics goods, need to collect some percentage of electronics they sell annually. This means that for every 100 smartphones that a brand sells, it is the brand’s responsibility to collect at least some at end of lifespan of the product. The average lifespan of various consumer electronics categories differs widely.
“Being able to collect these products at the end of the lifespan is a big problem for a lot of brands. If a company, for that matter a startup, can come up with a plan to effectively collect such products, it will be of great help to the original producers. Collaborating with brands and being able to plan and implement collection of e-waste is a very big business opportunity itself,” Karan explains.

“Lithium-ion batteries, though a small part of e-waste, is the talk of the town right now. Apart from being a very important subject right now, the recycling opportunity in this domain is huge enough to create economies of scale. The best part about e-waste is everything being interconnected,” adds Karan. 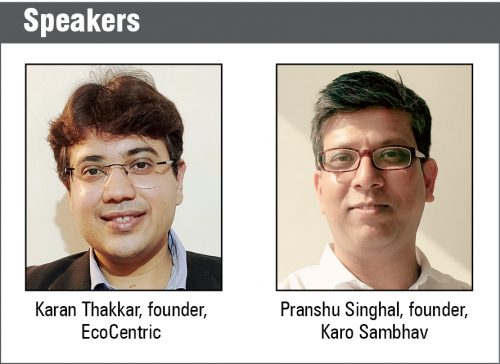 Some of the best ways to collect e-waste include partnering with municipalities, societies, and waste traders. While the former two can help one source e-waste directly, the latter (may be a more efficient one) can help source e-waste in a faster manner as waste traders usually have their own channel partners who collect waste and sell it to them.

“Tying up with traders can help in the long term as you can guide these traders on what to collect and how to collect. These traders, in turn, can teach their channel partners the same. The scale of channel partners such traders have can be highlighted from the number of scrap buyers (kabbadi walas) roaming on the streets asking for scrap in exchange of money,” says Karan.

The next problem, which is also a big business opportunity, is segregation of the waste. Apart from brands who are trying to meet their e-waste collection targets, one cannot just sell entire smartphones, laptops, or other electronic good just like that. There are also dealers who buy outdated electronic goods in bulk, but the bigger opportunity lies in being able to segregate this waste and sell it in batches accordingly. 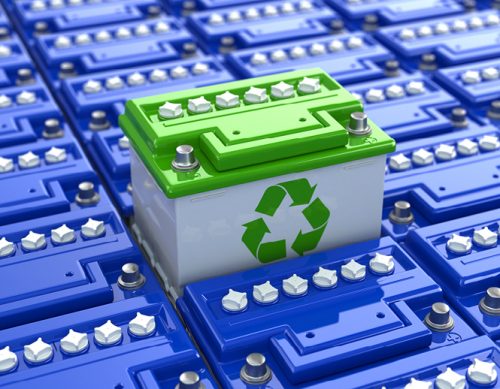 Pranshu says, “Setting up a system that enables effective e-waste collection management is the biggest opportunity of them all. Neither do we have evolved collection systems nor do we have the best-in-class recycling systems for multiple categories in India.”

Mukul Yudhveer Singh is a business editor at EFY