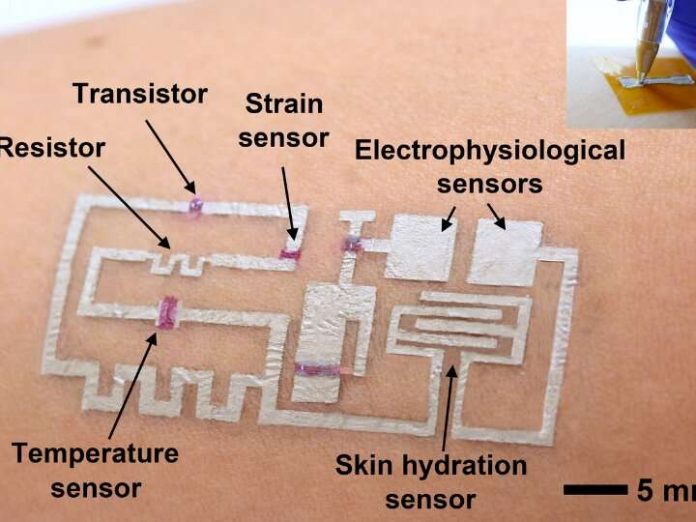 Researchers demonstrate a new form of electronics known as “drawn-on-skin electronics,” allowing multifunctional sensors and circuits to be drawn on the skin with an ink pen.

Wearable sensors have gained a lot of attention in the last couple of years. Recently, many researchers have focused on wearable bioelectronics which are soft, flexible patches attached to the skin that monitor, prevent and treat illness and injury by tracking physiological information from the wearer.

The sensors in wearable watches and fitness trackers are not accurate. The accuracy may not matter in tracking steps, but it matters when it comes to checking heart function, temperature and other physical signals used for diagnostics and treatments.

A team of researchers from the University of Houston has developed a new form of electronics known as “drawn-on-skin electronics,” allowing multifunctional sensors and circuits to be drawn on the skin with an ink pen. The research was reported in the journal Nature Communications. The developed electronics allow for the collection of more precise, motion artifact-free health data, solving the long-standing problem of collecting precise biological data through a wearable device when the subject is in motion.

“It is applied like you would use a pen to write on a piece of paper,” said Cunjiang Yu, Bill D. Cook Associate Professor of Mechanical Engineering at the University of Houston. “We prepare several electronic materials and then use pens to dispense them. Coming out, it is liquid. But like ink on paper, it dries very quickly.”

The device can track muscle signals, heart rate, temperature and skin hydration, among other physical data. The researchers also reported that the drawn-on-skin electronics have demonstrated the ability to accelerate healing of wounds.