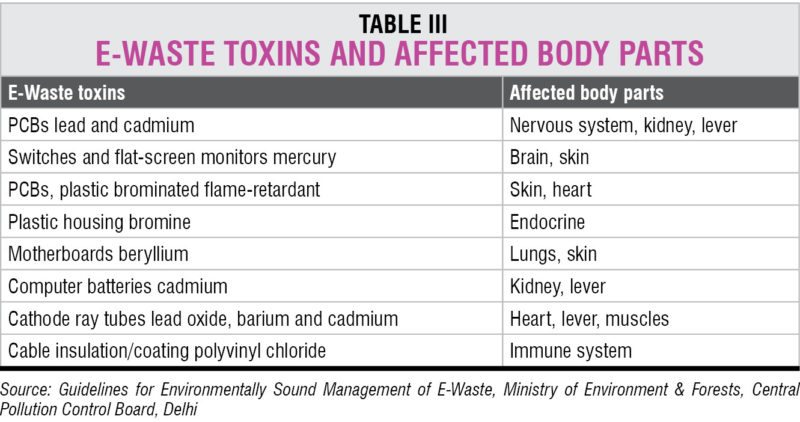 E-Waste (Management) Rules 2016, formulated by Ministry of Environment and Forest

Ministry of Environment and Forest has formulated and notified E-Waste (Management) Rules, 2016, to collect, dismantle and recycle all e-waste. The rules reflect commitment to environmental governance. The rules have, for the first time, included management of e-waste generated from disposal of mercury-containing compact fluorescent lamps, which are dangerous to the environment and health as these contain mercury.

New instruments of E-Waste Exchange, Deposit Refund Scheme and Extended Producer Responsibility have been introduced as incentives for consumers to voluntarily adopt the system of waste management. E-Waste Exchange offers sale and purchase of e-waste. If you as a consumer deposit end-of-life EEE, you will get a specified amount for the scrap.
Under Deposit Refund Scheme, the manufacturer will charge an additional amount as deposit at the time of sale, which will be returned to you along with interest when the end-of-life equipment is returned.

Under Extended Producer Responsibility scheme, manufacturers will be responsible for the collection and disposal of e-waste in an environmentally-sound manner. Other features of the rules are:

1. Rules are also applicable to components, consumables, spares and parts of EEE.

3. Responsibility to implement these rules lies with the state governments. They are responsible to ensure registration, skill development and monitoring to ensure safety and health of workers, and making available industrial space for e-waste dismantling.

4. e-Waste transporters need to carry a manifest prepared by the sender, giving all details.

6. The refurbisher has to collect the e-waste generated during refurbishing and channelise it to the authorised dismantler or recycler.

7. There is liability for damages caused to the environment or third party due to improper management of e-waste; financial penalties to be imposed, where environmental degradation is happening.

8. The dealer, if given the responsibility on behalf of manufacturers, has to collect e-waste by providing the consumer a box for sending to the authorised dismantling centre.

India is a signatory to Basel Convention, which is a global agreement to handle waste to protect the environment and peoples’ health. The convention is the response of the international community to the problems caused by the annual worldwide production of 400 million tonnes of hazardous waste, which are toxic, poisonous, explosive, corrosive, flammable, eco-toxic or infectious. It addresses increasing concerns over the management, disposal and transboundary movements of hazardous waste, and puts obligations on to its parties to ensure that such waste is managed and disposed of in an environmentally-sound manner.

The convention was adopted in 1989 in Basel, Switzerland, and entered into force in 1992. Main principles of the convention are:

1. Trans-boundary movements of hazardous wastes should be reduced to a minimum consistent with their environmentally-sound management.

2. Hazardous waste should be treated and disposed of as close as possible to their source of generation.

3. Hazardous waste generation should be reduced and minimised at source.

Total number of ratifications to the convention stands at 63. Basel Convention Annex VIII refers to e-waste, which is considered hazardous under the convention.

Suggestions to prevent the e-waste crisis

Solution to this huge e-waste crisis lies in prevention rather than its control and management. A feedback loop needs to be created to product developers and designers to design end-of-life costs; for example, by making the product less toxic and more amenable to material recycling.

Recycling of e-waste is beyond the means of most consumers or local bodies, given its toxic nature. Manufacturers should therefore bear the responsibility for financing the scientific treatment of the e-waste, discarded by customers and be responsible for end-of-life costs.

Producer Responsibility Legislation for e-waste is already in force in developed countries such as EU, Japan, Korea, Taiwan and some American states. It is absolutely necessary that multinational companies treat all customers globally in the same way and create customer awareness for proper and correct disposal of their products and offer take back and recycling services in all countries—not just in countries where this is a legal requirement.

Manufacturers should take back their products once discarded by customers and ensure responsible recycling and disposal when products reach their end-of-life phase. Moreover, they should ensure a robust system of e-waste collection and treatment so that it is collected and recycled in a safe manner.

In our country the take-back programme is not working as well as it should, due to lack of an effective system, complex procedures and lack of awareness and education among customers.