The biggest advantage of 3D printers today is rapid prototyping. At times, 3D printers could be the right equipment for low-batch production than going for traditional manufacturing. In this article, we particularly focus on 3D printers under Rs. 100,000. -- Abhishek A. Mutha is a senior technical correspondent at EFY

The biggest advantage of 3D printers today is rapid prototyping. At times, 3D printers could be the right equipment for low-batch production than going for traditional manufacturing. “3D printers started being used as geek tools and are now shaping up as user-friendly tools; even my eight-year-old daughter uses one for her school projects,” says Vishal J.C., CEO, Grey Sim Ltd.

Shiv Bhambri, CEO, RS Components & Controls Ltd, feels, “3D printers are ideal for anyone who wishes to explore the fascinating world of 3D printing, build prototypes or even carry out small volume production.”

In this article, we particularly focus on 3D printers under Rs. 100,000 and attempt to help you make the right choice.

Generalising the family of 3D printers, Raja Sekhar Upputuri, co-founder, Think3D, notes that there are three kinds of 3D printers. “First, basic printers coming at an entry price point with very low build volume and a single extruder; second, medium range printers with decent build volume and single or dual extruders; and third, printers with high build volume used for semi-industrial and semi-professional applications, which, of course, come with a higher price tag.”

Upputuri says, “Companies that started with basic printers are venturing into the other two categories, and vice versa. Customers have a variety of options to choose from today. In fact, some vendors are introducing stripped-down, economical versions of 3D printers available for as low as Rs. 30,000.” Although these printers might not provide professional-grade experience, these are mostly used for educational purposes by schools and colleges.

“For printers within or even slightly exceeding the price tag of Rs. 100,000, there are plenty of options available to choose from. This is mostly because of the stabilisation of FDM technology, but there is no major breakthrough in the printers as of now,” Reddy adds.

Considering this price range, differences in 3D printers available in the market are with respect to parameters such as build volume, price, number of extruders or underlying chips that make movements faster (speed of the printer).

Upputuri says, “There is a rise in the speed and number of extruders for a 3D printer.” He adds, “Earlier dual extruder printers were costly but today these are available for less than ` 100,000. This is mostly because of the increase in volume and stabilisation of FDM.”

He adds, “Some manufacturers are introducing accessories like acrylonitrile-butadiene-styrene (ABS) spray for bed preparation and spray to smoothen printed parts, along with 3D printers.”

Locked or open printers—the choice is yours
Broadly speaking, FDM printers available in the market can be divided into two groups: locked 3D printers and open 3D printers, informs Reddy.

In locked 3D printers, the whole printer is a locked system and the customer has to purchase the same company’s filaments, whereas in the case of open 3D printers, a buyer can purchase 3D filaments from any available brand. 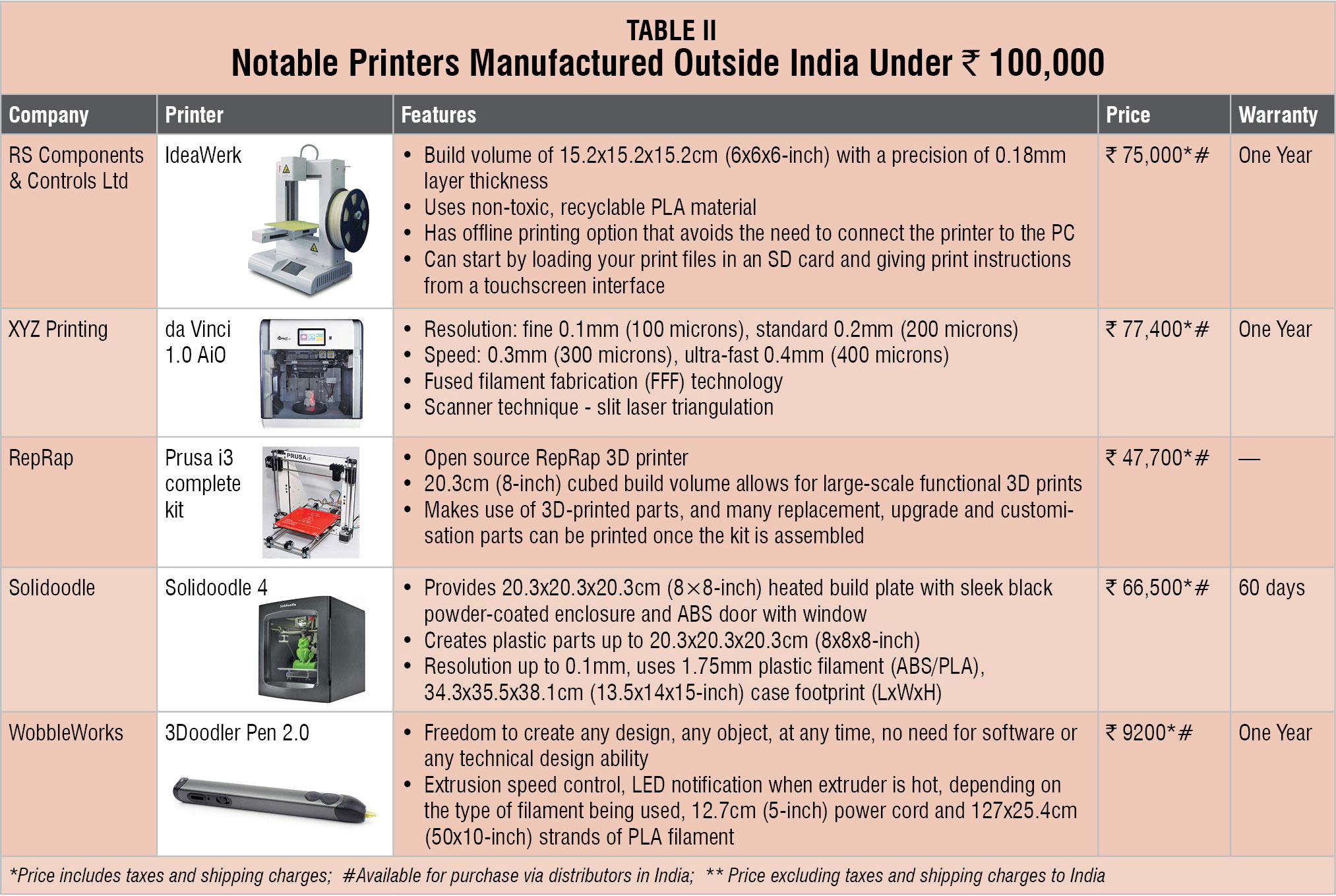 Reddy says, “Both come with their own share of advantages and disadvantages. If a buyer prefers to go with a locked printer, he or she should check if filament supply and after-sale service is available.”

Filament is the input, consumable material for a 3D printer. To make a 3D model, the filament is melted and deposited in layers based on the design supplied to the printer. Filament for a 3D printer is as essential as an ink cartridge is for a 2D printer.

Reddy notes, “In locked-filament 3D printers, a chip is embedded in the filament such that the printer recognises only the filament manufactured by the same company or an authorised company.”