Such soldering stations have an auto-sleep function along with a power shut-off that gets activated once the set temperature is reached, preventing the soldering iron from getting over-heated and thus increasing life of the station and the tools attached. The auto-sleep also prevents oxidisation of the tip of the iron.

These soldering stations are used for fine SMD soldering, high mass soldering purposes and soldering parts of a heavy automotive.

User-friendly. You can also see simple and user-friendly S/D stations that not only provide different factory settings for adjustment of variable temperature, calibration value and standby time, but also provide the ability to use fixed temperatures, interlock and energy levels with the use of PC software or a micro SD card. Another special feature in such type of S/D stations is the shut-down and standby function that helps save energy, increasing the life of the iron tip at the same time.

Thermal control and lock. Have you ever thought of controlling the heat of the S/D station and locking it at a certain point so that the iron does not get overheated, eventually damaging the project? Think now, if you haven’t before.

The new S/D stations available now come with a control card that turn off power to the station if the iron tip reaches the set temperature. Now, to check if the tip of the iron has reached the set point or not, they have temperature sensors incorporated at the tip.

Such S/D stations provide certain features that are required for industrial manufacturing. These features are: compact design for energy saving, information regarding the errors and offset functions to moderate the heat. Such S/D stations are considered suitable for a wide range of applications starting from few touch-ups to heavy-duty work.

Temperature sensors and alarm. This is a soldering station that allows no fluctuation in temperature during continuous operation at heavy load. To support this feature, such stations have high-sensitivity sensors connected to an alarm that turns on when the temperature of the tip goes above or below the maximum and the minimum temperature settings. The alarm again turns on if the iron is left in contact with the component or the board longer than the time set. This also prevents overheating of the components. 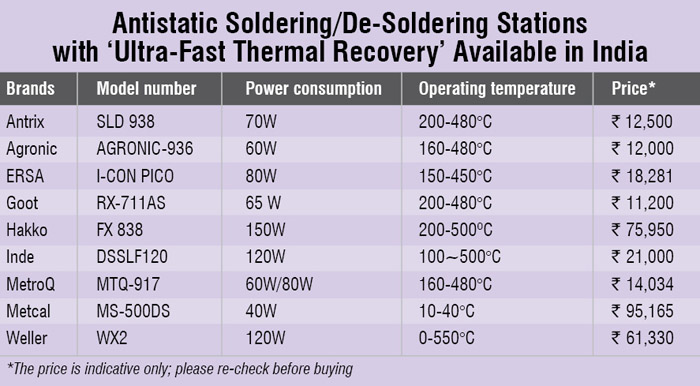 Another option which this soldering station provides is that, it is designed with thermal insulation capability to reduce the transfer of heat to the grip of the iron, allowing one to hold the iron for a longer time.

Based on Curie heat technology. In this type of heating technology, as soon as the power to the soldering station is turned on, the AC signal goes to the handle through a coil, due to which an eddy current is induced in the heater (that is ferromagnetic) to increase its temperature. Now, as soon as the temperature reaches the Curie point, the magnetic properties of the heater change, inducing no further eddy current and turning off the heat. But as soon as the temperature goes below the Curie point, the current is induced again, generating another heating cycle.

Hybrid S/D stations. S/D stations are said to be hybrid when these use hybrid tools in conjunction with hybrid heating technology that combines infra-red (IR) radiation with conventional heating, especially for SMD components. The IR radiation allows the tools to transfer heat to the components homogeneously.

Such stations have exchangeable hybrid adaptors that protect the chips from getting damaged during the heat transfer. These generally have high-power heaters, with wattage of about 200W.

The choices are many with respect to features, but yes we do have some parameters now to guide us. Don’t you think the new styles will affect the selection parameters in the days to come?