This LED Night Lamp uses a 1.5W LED module operated on a 12V DC power supply. Here, an L14F1 phototransistor works as a sensor. When there is sufficient light falling on the sensor, LED remains off; but when there is dim or no light, LED automatically starts glowing. The author’s prototype is shown in Fig. 1.

The circuit diagram of the low-cost ambient-light-controlled LED Night Lamp is shown in Fig. 2. The circuit consists of a bridge rectifier (BR1) followed by a filter and a Zener regulator (ZD1). ZD1’s output gives 12V, which is used to drive the main circuit.

It may be noted that a step-down transformer is not used here. In this circuit, voltage is obtained through 0.47µF capacitor without much loss. Unlike resistance, there is not much loss in the practical capacitor because current (I) leads voltage (V) by almost 90 degrees. 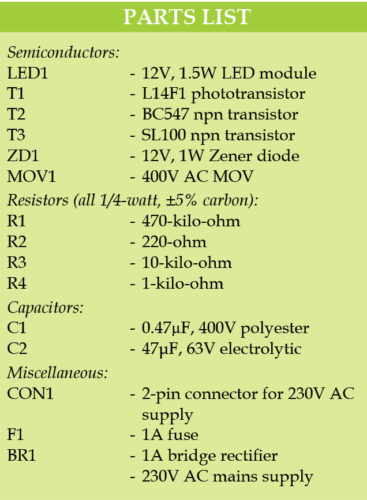 A PCB layout of the low-cost ambient-light-controlled LED Night Lamp is shown in Fig. 3 and its components layout in Fig. 4.

Daniel Antonio Figueiredo is a retired scientist/engineer from National Institute of Electronics & Information Technology (NIELIT), the government of India. He worked in the private sector in various capacities before joining NIELIT