Morse code is a method of transmitting textual information as a series of on-off tones, lights or clicks that can be directly understood by a trained listener without using any special equipment. -- By V. Nagaraj & K.N. Sreekumar

Morse code is a method of transmitting textual information as a series of on-off tones, lights or clicks that can be directly understood by a trained listener without using any special equipment. The International Morse Code encodes alphabets, numerals and a small set of punctuation and procedural signals as standardised sequences of short and long signals called ‘dots’ and ‘dashes,’ respectively.

Each character (letter or numeral) is represented by a unique sequence of dots and dashes. The duration of a dash is three-times the duration of a dot. Each dot or dash is followed by a short silence, equal to the dot-duration. The dot-duration is the basic unit of time measurement in code transmission. Morse code speed is measured in words per minute (wpm). Characters have differing lengths as these contain differing numbers of dots and dashes. Consequently, words also have different lengths depending on the total number of dots and dashes, even if these contain the same number of characters.

The Morse code encoder presented here converts texts, numbers and special characters into Morse code as audible output on a piezobuzzer (PZ1). The encoder along with any Morse code transmitter can be used for transmission of Morse code.

LED2 through LED5 are connected to pins P0.3 through P0.6 to provide the visual indication for ‘EDIT,’ ‘TRANSMIT,’ ‘MORSE OPTICAL’ and ‘DONE’ mode, respectively. Port pin P0.7 of the microcontroller drives the piezobuzzer with the help of transistor T1.

When the buzzer is kept in front of the microphone of a Morse code transmitter, text entered on the display gets transmitted. The Morse code receiver receives the transmitted code and decodes it to retrieve the message. Power-on reset is provided by the combination of resistor R2 and capacitor C3. Switch S1 is used for manual reset. A 12MHz crystal along with two 33pF capacitors provides the basic clock frequency.

To derive the power supply for the circuit, the 230V AC mains is stepped down by transformer X1 to deliver a secondary output of 9V, 500mA. The transformer output is rectified by a full-wave rectifier comprising diodes D1 through D4. The full-wave rectified output is smoothened by capacitor C1 and regulated by voltage regulator IC 7805 (IC2). Capacitor C2 bypasses the ripples present in the regulated supply. LED1 acts as a power indicator. Resistor R1 limits the current through the LED1. 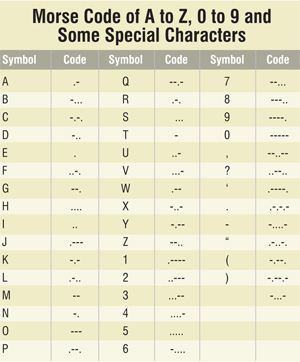 Assemble the circuit on a PCB to minimise time and assembly errors. An actual-size, single-side PCB for the microcontroller-based Morse code encoder is shown in Fig. 4 and its component layout in Fig. 5.

The table shows Morse code of uppercase letters A through Z, numbers 0 through 9 and some special characters.

Power-on the circuit and press switch S1 to reset it. Let’s say you want to transmit the message ‘HELLO.’ This message consists of alphabets, so press key S4 (CH.) to input capital letters from A to Z. Select letters from A to Z by pressing key S2 (UP) for forward movement of the alphabets and key S3 (DN.) for reverse movement of the alphabets. Once the desired alphabet is selected, confirm the selection by pressing ‘OK’ (S7) key. In a similar way, other letters of the message can be encoded. Every time you select a letter, it is confirmed by pressing S7 (OK) key.

The software for the microcontroller-based Morse code encoder is written in ‘C’ language and compiled using the Keil µVision4 compiler. The pro-gram is well-commented and easy-to-understand. Burn the generated hex code into the microcontroller by using a suitable programmer.