This is a circuit that switches off the supply to electrical appliances when there is any failure in power supply. It is based on transistors and triac and doesn't draw any power when the load is off. -- SUNISH ISAAC

A good number of circuits which turn off the power to the load on mains failure have already appeared in EFY. This circuit is different because it consumes no power when the load is off. Further, the circuit is completely solid state as it does not use any relay or other electromechanical devices.

Here resistor R1, diode D1, capacitor C1 and zener D2 are used to develop a mains-derived 9V DC supply which can be fed to the triac gate. Switches S1 and S2 are used to accomplish ‘off ’ and ‘on’ operations respectively. 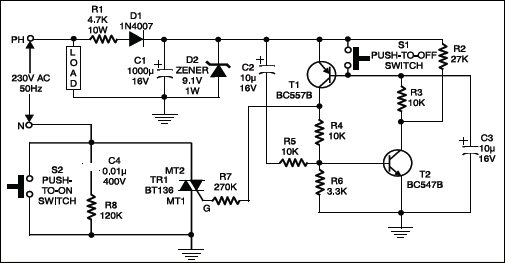 The load can be switched off either by pressing switch S1 or by turning off the power to the circuit. When switch S1 is pressed, transistor T1 is no more in saturation and thus it turns off the triac and the load. Since the rectifier circuit cannot get neutral line when the triac is off, it consumes absolutely no power when then load is off.

The idea can be suitably adopted for timer applications where the power to the timer circuit needs to be turned off after the set time delay. An opto-coupler can replace switch S1 for using the output of a low-voltage control circuit for switching off.