This IR Remote Can Control Up To Eight Devices

This Device Controller project based on an 8-bit ATmega328P microcontroller (MCU) can control up to eight devices connected to its electromagnetic relays. The article also describes how to program an MCU to accept infrared (IR) remote control signals for controlling the relays.

Here, an ordinary TV remote control is used along with the 28-pin ATmega328P MCU in DIL package and Arduino bootloader to control the devices. Pin details of ATmega328P are given in Fig. 1.

This section includes a 230V AC primary to 15V, 1A secondary step-down transformer (X1). The secondary of this transformer is connected to a bridge rectifier circuit formed by four IN4007 rectifier diodes (D1 to D4) and filter capacitor C1. Regulators 7812 (IC1) and 7805 (IC2) are used to get required 12V and 5V supplies, respectively.

An IR module TSOP1738 (IRRX1) is used to receive infrared light signal from any TV IR remote control. The IR remote control signals are sent to IC3 microcontroller’s pin 18 for processing and controlling the relays as per program and calibration of the controller unit.

This unit is the heart of the device. It has two parts: hardware and software.

The hardware receives the infrared light’s hex-coded signals generated by TV remote control and sends them to the MCU through infrared receiver module TSOP1738 (IRRX1).

The MCU can be programmed by following the steps below:

After installing Arduino IDE in the PC, install IR remote libraries. For this use IRremote-2.0.1 and IRremote-2.2.3 folders included in this project. Copy these folders under Arduino/Libraries in a Windows PC. Alternatively, you can install the libraries from Arduino IDE as explained below:

Every remote has a different code corresponding to each key/button. In order to use your IR remote in this project, you need to decode the code of each button. For that, first open the IR decode.ino code from the Arduino sketch window.

To use this code you need a hardware circuit such as the one shown in Fig. 5. Here, output pin 3 of TSOP1738 module is connected to pin 12 of Arduino Uno. 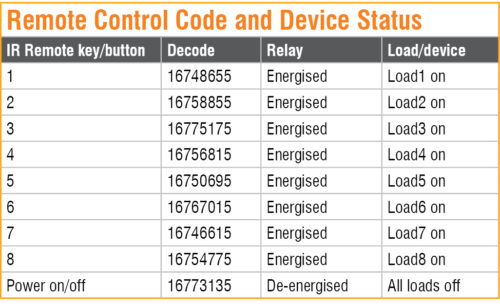 A PCB layout for device controller is shown in Fig. 6 and its components layout in Fig. 7.

First, decode each key of the remote control, include decoded values in devicecontefylab.ino code and upload it to the MCU as explained earlier. Remove the MCU from Arduino board and insert it into the PCB. It is recommended to use a 28-pin IC socket for the MCU.

Connect eight loads across Load1 through Load8. Connect secondary of transformer X1 to the PCB for power supply. Point the IR remote towards TSOP1738 module from a distance of about one metre. 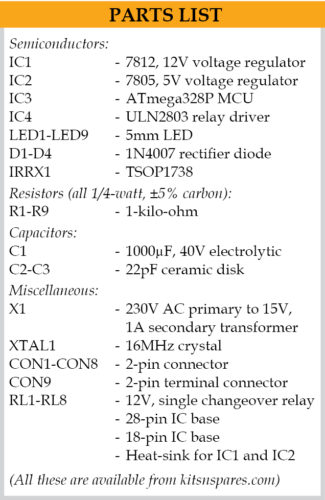 Adeeb Raza is an electronics engineer having a practical experience of about 35 years. He is a regular reader and contributor to EFY.