Magnetic Walking Stick for the Visually-Impaired 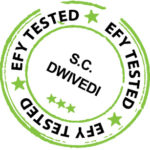 The circuit diagram of the walking stick for the visually-impaired is shown in Fig. 1.

Two normally-open (NO)-type reed switches are placed at the bottom of the walking stick, which is connected to a buzzer. The proposed construction detail of the magnetic walking stick is shown in Fig. 2.

A suitable magnetic track should be constructed on the roads, street crossings, office corridors and the like. Whenever a user walks down the magnetic track along with this stick, reed switches get closed and activate the buzzer. Presence of the buzzer sound indicates that the user is following the right track or path. When the buzzer sound stops, the user understands that either he or she is walking on the wrong path, has reached the destination or it is time to ask for help from the people nearby.

Take a 1.27cm PVC pipe and insert two reed switches and a 1.5V cell inside the pipe, as shown in Fig. 2. Mount the buzzer at a suitable location outside the pipe.

The whole system can be enclosed inside the PVC pipe and used as a white cane. The user does not need to carry any other device. He or she should always keep the tip of the walking stick near the magnetic track while walking. Fig. 3 shows the application of the project along the magnetic track (indicated in yellow).