This is a one-time password (OTP) based smart locking system using Arduino and Bluetooth. It can generate a new password every time you try to unlock it, which gives you extra security.

A key-based locking system has now become outdated because if your key is lost or stolen, it creates a huge problem. Also, the electronic wireless locking system is not that safe because you might forget your password, or it might get stolen by others while entering the password on your device. So, we can make a DIY smart lock that has the capability to remove all these security threats and problems.

The author’s prototype wired on a breadboard is shown in Fig. 1.

To start the project, we need the following hardware components/materials:

After collecting all these components, start the project by writing an Arduino code.

Now, in the second code snippet, we need to set up serial and baud rate for Bluetooth as shown in Fig. 3. Set up a pin for servo using servo.attach (PWM pin number) function. Then define pin mode as output for LEDs.

In the third part of the code, create a loop, and check the incoming data from Bluetooth. Next, create ‘if statement’ to check the device ID. If it matches, create OTP ( ) function for generation of OTP as shown in Fig. 4.

In the last part of the code, as shown in Fig. 5, create a check ( ) function to check whether OTP is correct or not. If it is correct, turn the servo to an open position to unlock the locking system.

First, you need to have a valid Google email account. Next, open the link to start the MIT App Inventor project. You will find two tabs—Designer and Blocks on the top right side of the screen. Create a layout from the designer section, as shown in Fig. 6. Just drag and drop the components from the user interface (UI) on the left side or download the .aia file from the source file given at the end of article.

Now, select the Blocks tab to start blocks coding. (In this platform, you can program the app’s behaviour by putting blocks together). First, we need to initialise Bluetooth list available for connection from the App Inventor Blocks Editor section. Then we need to set a button function to send device ID according to our Arduino code, as shown in Fig. 7.

Now, save the file as .apk on your computer. Transfer .apk file to your Android smartphone and install it.

We are almost done now. We have completed Arduino coding and Android app development. Now, let’s start our hardware setup and connections. The circuit connections with the Arduino Uno board and other components are given in the table and also shown in Fig. 8.

Next, let’s crosscheck everything, including connections. Wrong connections can damage your costly Arduino board. Do not connect servo motor directly to the 5V pin of Arduino. It is not safe because Arduino has not been made for the amount of current that is required for servo motor to operate. Use a separate 5V DC supply for the servo motor. For interfacing the servo motor with the actual lock, you may refer to the ‘Make Your Own Smart Wireless Biometric Lock’ DIY article published in February issue. 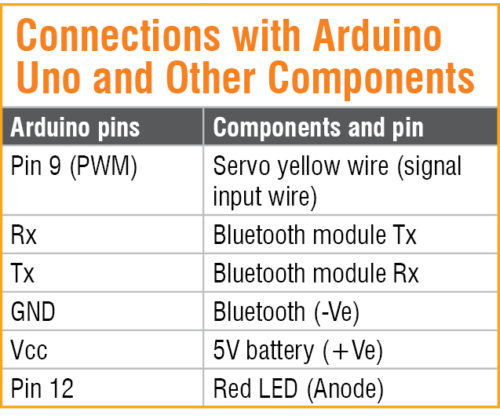 Congrats, you have completed your awesome project! Now, switch on your OTP based smart wireless locking system and follow the steps given below: