Previously we have made a smart robot that can recognize the face but be human and have some extraordinary capability that is not available in any robot. The smart AI robot can recognise the face as well as can detect the age and gender of the person using the voice of person, the robot now does not need to see the face and body of the person to recognise them, it can now sense the gender and person using the voice tone.

So let’s start the project with a collection of the following components Here components from the previous version of the robot.

Next, you have to assemble the robot as described in the article then we have to start working on this version of the robot.

First of all, we need to assemble the robot face as in the previous version of the article then we have to and the voice bonnet to the robot.

Next, we have to safely remove the RPI4 board and then Attach the AIY Voice bonnet on the Raspberry Pi 4 keeping in mind the pins matching each other on raspberry pi and bonnet.

Next, we have to attach the speakers to the speaker out pin of Raspberry Pi Bonnet.

Now we are ready to use the Raspberry Pi Voice Bonnet On Our Smart AI Robot. 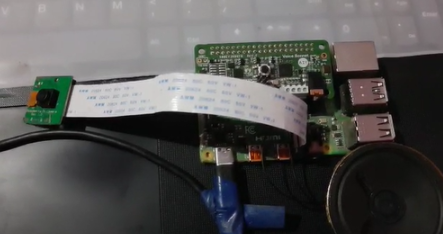 After install of the above libraries, we are now all set for the coding part

Open the Python IDLE and then code as following:

First, we have to import the required library and modules in code.  Here we have imported the time, threading for multiple processing like we need to record the audio and check the but push at the same time then we need to import the espeak for speech synthesis and the aiy board library to access the aiy board recording and playback function. Next for recognition of voice and sensing the gender of the person we import the voice gender library in the code

After that, we have defined the filename where we temporarily save the person’s voice so that we can process them as per our need. 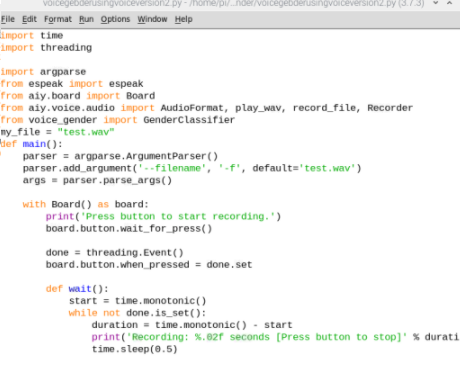 After that we will create the main function where we create the code that checks the button press event on bonnet if it detects the press of a button then it will automatically start the voice recording function and record the users’ voice until the next button press event and then it saves the voice recorded in the test.wav file after that it calls the voice gender function that process the audio and then classify the audio tone as male and female and then using espeak it will tell if the speaker is male or female and also play back the audio. 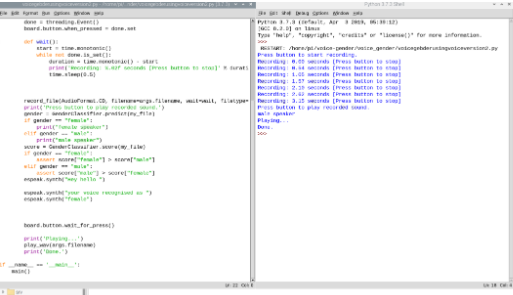