In future, there will be two worlds, one where you interact naturally and in 3D, and another where you will need controllers to act. Tracking and mid-air haptics are transforming interactions of the virtual world. These can revolutionise 3D automotive controls, bringing the sense of touch into virtual reality (VR) and augmented reality (AR).

Ultraleap was formed when Leap Motion and Ultrahaptics came together in 2019. They united advanced hand tracking with haptic technology that creates sensation of touch in mid-air. Ultraleap’s optical hand tracking module captures movements of hands with unparalleled accuracy and near-zero latency.

It is a robust and reliable skeletal model that has motion-to-photon latency below the human perception threshold. It makes human interaction in the digital world natural and effortless. It utilises two image sensors plus infrared (IR) LEDs. The LEDs illuminate hands with IR pulses over hundred times a second. Every time the LEDs illuminate, sensors send data back to the computer to track hands. It is developed for public use with CE, FCC and CAN ICES-3 certifications. It can be bought at the price of US$ 89 from Arrow and Adafruit.

Leap Motion controller captures movement of users’ hands and fingers so these can interact naturally with digital content. This hand-tracking system is suitable for various such applications as AR/VR/XR (extended reality) prototyping and R&D, or next-generation natural user interfaces development that can be embedded in enterprise-grade hardware solutions. Tracking data can be used to control almost anything, from flying drones and robotic arms to LEDs and 3D printers. 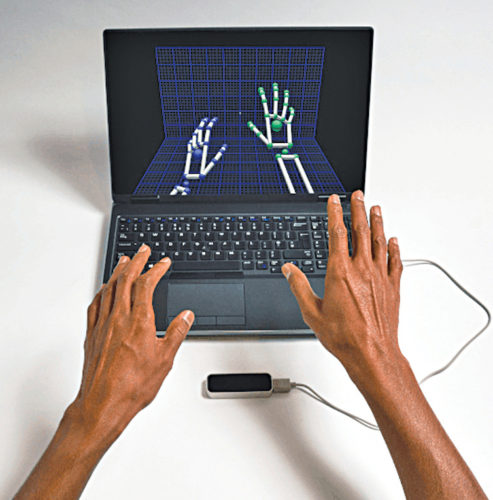 Free apps on Leap Motion app gallery can be downloaded for VR headsets such as Oculus Rift and HTC Vive. It can also be integrated with Arduino to map hand motions to a robot, or drive a remote-controlled car over Wi-Fi. Its powerful interaction engine enables natural hand and object interactions. It has a USB connection, 30mm×80mm×13mm dimensions, frame rate of 120fps, operating temperature of 0° to 45°C and a 135° field-of-view extending above the device.

All users developing with Ultraleap hand-tracking devices and/or software need a licence. For non-commercial use, developers can have free licences. Businesses integrating Ultraleap tracking software or software to develop an application for military, industrial, commercial or medical equipment will need a commercial licence. Enterprise licence is required for applications of internal business use only.

The hand-tracking software captures all complexity of natural hand movements subtlety. It uses images to generate a virtual model of hand movements. It models not just the palm or fingertips but joints and bones inside the hand. This helps determine the position of the finger or thumb accurately, even if it is hidden from view. Grabbing, pushing, swiping and pinching all become as effortless as these are in the real world.