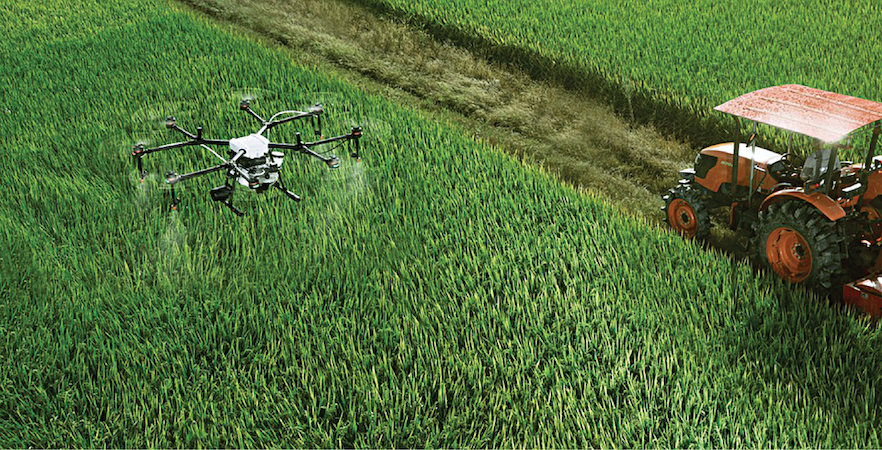 Given the rise in the number of agritech focused startups taking shape in the country and reforms being introduced by the government of India, can India lead the global race in agritech?

Refer to any report with keywords ‘Top 10 Agriculture Nations of the World,’ and India’s name will pop up there. In terms of technical expertise, on the other hand, India has made significant advancements during the last two decades. Now, given the rise in the number of agritech focused startups taking shape in the country and reforms being introduced by the government of India, we are trying to answer one question—Can India lead the global race in agritech?

India: The advantages and disadvantages

Among the nations in ‘Top 10 Agriculture Countries of the World’ list, the United States, China, Russia, Brazil, and India grab the top spots. Compare these countries with India in terms of technological prowess in agriculture, and you will get your answer, but there is a catch.

If we compare India’s agritech vertical with that of Europe or some other countries, it is on par with them. However, the advantage that those countries have is the bigger land sizes available for cultivation compared to India. It is easier to get ROI over larger pieces of land.

The Indian agritech entrepreneurs may not have the advantage of larger land size and economies of scale, but the market size in India is pretty big. The real challenge for us is to develop and deploy technology in the local context.

Giving examples of 30-to 50-tonne capacity cold rooms in countries like Kenya and some from Europe, Devendra Gupta from Ecozen points out that such cold rooms do not work in India. The primary reason behind the same is smaller patches of lands owned by farmers, and hence smaller yields produced. He suggests making these cold rooms less technology-heavy and more efficiency heavy. Putting in more technology to a cold room might increase the cost to a farmer, but it is not necessary that the add-on technologies will increase the efficiency for the farmers.

Smallholder farmers, according to the Food and Agriculture Organisation (FAO) of the United Nations, are vital for India’s agriculture and rural economy. Smallholder farmers—defined as those marginal and sub-marginal farm households that own or/and cultivate less than 2.0 hectares of land—constitute about 78 per cent of the country’s farmers (as per Agricultural Census 1990-91). In absolute numbers, smallholder families constitute more than half of the national population of India.

“The tech that we are building in India can be easily applied to agricultural practices anywhere in the world. The challenges that we have here in the Indian market are something that can help us create agritech solutions for the entire world,” says Srivatsa Srenivasarao, co-founder, TraceX Technologies.

A report released by Nasscom in 2019 states that as compared to five global agritech companies that came to India recently, 25 Indian agritech startups have ventured into global markets. 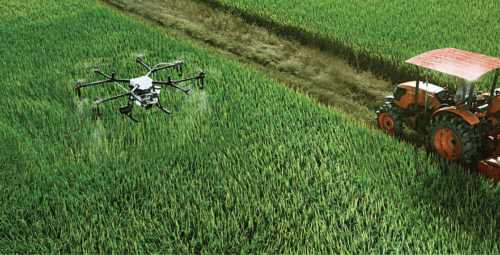 A recent report by Maple Capital Advisors points out that over 500 active agritech startups are operating in India. The same report mentions that the advisory firm is expecting the total investments in the agritech sector to exceed 500 million dollars in the next two years. It is to be noted here that the sector has raised more than 450 million dollars during the last few years. The amount raised in 2019 was 244.59 million dollars. The government of India has also announced the commissioning of a dedicated cell for agri startups.

Karna continued, “The farmer as a consumer and producer is now being empowered by access to information, inputs, farm to fork linkages and financing support. We expect continued investment momentum, especially on the back of significant reforms and digital inclusion.”

“The agriculture systems in America and Europe have been designed to serve large landlords. India now has the opportunity to be the laboratory for designing agritech for the rest of the world,” says Reihem Roy, partner, Omnivore.

In India, the average farm size, as per the Agriculture Census of India, is 1.08 hectares.
“We need to create and offer solutions to farmers worldwide. The ideal farmers to reach out with these solutions will be the farmers that look like the Indian farmers. South Asia, South East Asia, and Sub-Saharan Africa are good markets to offer solutions,” adds Roy.

The recent measures announced by the government of India, which include agri infra fund of hundred thousand rupees and two hundred thousand rupees credit boost to 25 million under Kisan Credit Card Scheme among others, are expected to strengthen infrastructure logistics and capacity building in the agricultural sector to increase farmer’s income in the twenty to thirty per cent bracket.

Maple Advisor’s report suggests that this will further pave the path for bigger changes and increased private sector participation in the food chain from farm to fork in all elements—marketplaces, cold chains, warehouses, etc.

In India, the smallholder farmers (those owning less than 2.0 hectare of farmland) comprise 78 per cent of the country’s farmers. However, they own only 33 per cent of the total cultivated land and are still able to produce 41 per cent of the country’s food grains. These facts, sourced from the Food and Agriculture Organization of the United Nations (FAO), are more than proof that agritech solutions originating in India will have to focus on small farmers to be able to scale.

To add some more facts sourced from FAO, smallholder farmer families constitute more than half of India’s population, and as the national population increases, so does the number of small-holdings.

“When you look at smallholders and analyse properly, you always find out that challenges lead to opportunities. The best agritech solutions for smallholder farmers, in my view, will be something that can bring the smallholder farmers together. Because when they collaborate, they will be able to produce better farm incomes and also adopt best agritech practices and innovations,” says Praveen Kumar of Unnmiti.

He adds, “What smart farming does is that it enables a farmer to answer natural challenges in a very efficient manner. With the kind of data that are now being generated by different farms, the day is not far away when farmers will be able to gauge the impact of their decisions even before they take them.”

Drones in agritech: The biggest example

Startups using drones for improving agricultural practices is probably the biggest example of the agritech revolution getting brewed in the country. From being used right from the first step of levelling land pieces and sowing seeds, drones have found usage in almost every step that encompasses a farmer’s life.

The next generation of farmers, as Ashish Kumar from Amosta explains, is open to experimenting with new technologies in agriculture. He says, “Another thing is that not every farmer’s attitude will shift to using agritech and drones.”

“As far as ROI is concerned, there are farmers with the mindset that if a work can be done with manual labour, why should they shift to using technology like drones? Now the interesting part is that a lot of these farmers now use tractors instead of manual labour, and when tractors were first introduced, they were not adopted immediately. But today, a lot of them use tractors,” he says.

Big corporate houses like Pepsico, farmer’s cooperative societies, and big landowners, as per Ashish, will be the first ones to use drones and other mediums of agritech. He noted that these will be the ones driving the ROI in the first adoption phase, and as technology in drones becomes economical to use, small-scale farmers will start adopting them, driving the ROI further.

The academia is playing its role too

The focus of a lot of students from the different engineering domains, as per Geetali Saha, associate professor, G.H. Patel College of Engineering and Technology, has been on taking up projects around agritech. She points out that the young generation of India understands the value of agriculture and is inclined towards making the conditions better in the country.
Engineering students taking interest in building solutions for farmers, as Professor Saha informs, is a sign of India’s bright future in the agritech stage. She explains that the earlier the students start working on a technology, the better solutions they can tailor.

“Students taking up agritech projects are not only good for the country but also for the budding entrepreneurs. These projects give students an edge when it comes to starting their entrepreneurial journey,” professor Saha says. 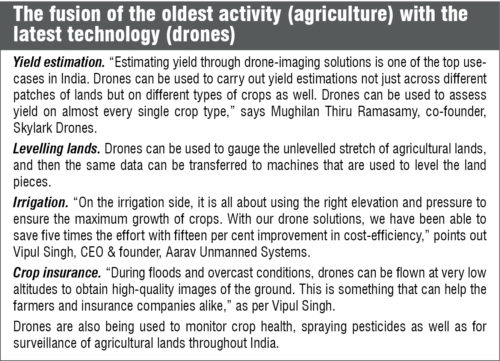 Given the arguments made at several Agritech panel discussions held at various editions of India Technology Week, it is clear that India has a golden opportunity to lead in the technology for agriculture space, and drones being used in various applications of agriculture is one of the biggest proofs of the same. The government of India, recently notifying that it will be funding 112 agritech startups in the country, is another hint towards the long-term plans of the country.

Union Minister for Agriculture Narendra Tomar, in July 2020, recalling Prime Minister Narendra Modi’s words, had also reiterated promotion of startups and agri-entrepreneurs. He had said that the government is working to ensure innovation and use of technology in agriculture and allied sectors.

The fact that a lot of countries, just like India, are constituted of small-land farmers is another proof that what we develop in India can be easily adopted and used by these countries. Given India’s prowess in developing low-cost yet top-of-the-mark technological solutions is also a clear hint that, if given economical agritech solutions, even bigger landowners from economies like the United States will not hesitate in adopting these solutions.

Yes, early adopters in the technology adoption curve define whether a technology will be a hit or a miss, but it is nowhere written that these early adopters have to be from developed countries. Countries falling in the continent of Africa, Europe as well as countries in South America, depend a lot on agriculture and, apart from having a lot of small land farmers, these countries are also blessed with climatic conditions very similar to India. As a matter of fact, it would be better to say that India is blessed with almost every type of climate present in different parts of the world, a requisite for defining agricultural activities!