Writing The Rules For Autonomous Vehicles

In their rush to market, autonomous vehicle makers are trying to solve the wrong problem. Adapting autonomous cars to a human driving environment is as difficult as it was to accommodate the first conventional cars.

Steven Keeping is a Sydney-based freelance journalist specialising in electronics. Prior to this, he worked with Electronic Production magazine in senior editorial and publishing roles on electronics manufacturing, test and design.

Self-driving vehicles are a good idea. Why? Because a world that invests enormous amounts of energy and precious resources building complex machines that spend most of their lives doing nothing is hardly on the path to sustainability. Last year, analyst Statista reported that, manufacturers assembled 94.7 million light vehicles (cars and vans), and that number is expected to grow to 111.7 million by 2023. This growth is driven in large part by Chinese and Indian middle classes as they look for ways to spend their new wealth. And yet, in the US at least, cars do little more than adorn the drives of suburban homes, spending just eight per cent of the time moving people from point A to B.

Even while doing the job for which they are designed, vehicles with a conventional (internal combustion) engine go about it in a compromised manner. According to The Atlantic, more than 80 per cent of the energy derived from gasoline is squandered by a car’s inefficiencies. There is nothing else in our lives that wastes more energy—or even comes close. Electric vehicles are far more mechanically efficient but still consume considerable energy in their construction, generate carbon during operation (unless the electricity for recharging has come from renewable sources) and are just as likely as conventional autos to sit idle in the garage.

There are signs that the latest generation of would-be drivers is indeed questioning the insanity of buying the most under-used asset they will ever own and paying around US$ 13,000 a year for the privilege. Moreover, young people find that online shopping, on-demand TV and social media enables them to do many things for which previous generations needed a car. Furthermore, majority of young people live in cities where congestion, lack of parking and resurgent public transport systems conspire to keep them off the road.

These millennials are the consumers of the future and a generation that thinks differently about transportation. Familiar with the gig economy, to them being able to hail a ride from a smartphone screen wherever and whenever seems the obvious answer to getting around. Spending a fortune on a steel box that is typically stationary either in a parking lot or traffic queue does not. That is why car companies, ride-hailing firms and Internet giants are climbing over each other to introduce fleets of autonomous vehicles that are only rented when needed. 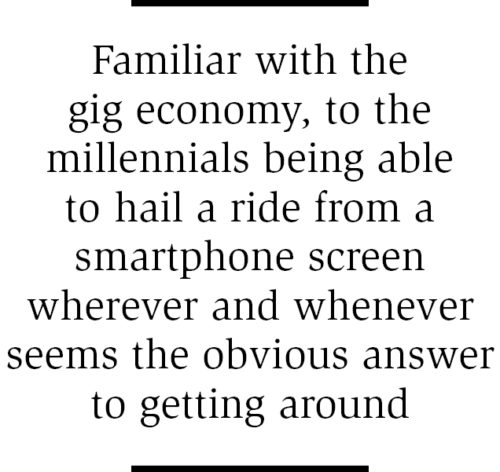 Software is the challenge

The hardware for autonomous vehicles is well-advanced. Technologies such as LIDAR that uses lasers to build a 3D picture of the environment, radar, GNSS, cloud connectivity, proximity sensors and cameras work together to present an accurate picture of what is happening around the vehicle to its brain. The challenge really starts when the car’s computer has to analyse all this information, work out what is going to happen in the next few seconds and then, crucially, decide what to do next.

The answer to this complex automotive engineering problem, according to the big players in the sector, is to teach the car to think like a human by showing it examples of situations that might come up and then telling it what to do. So, a car slowing ahead triggers the autonomous vehicle to brake gradually, a red light triggers a controlled stop and a school child running unexpectedly into the road triggers an emergency manoeuvre.

The problem comes when the situations are less clear cut. As The Economist points out, could a plastic bag blowing across the carriageway be mistaken for a running child, a puddle for a sinkhole in the pavement or a pile of snow for a badly-parked car? And what happens when the vehicle hits roadworks that force it to divert to routes not included in the digital maps stored in the computer’s memory?

Worse yet, it is almost impossible to write code for algorithms that act on information that human drivers detect and react to without thinking. Examples include the cyclist who does not yield, the learner driver who turns without signaling and the intoxicated pedestrian who stumbles into the road.

It is also hard to forge software that caters for exceptions to hard regulations. Imagine a broken-down vehicle on a two-lane highway with a solid line down the centre. A human driver crosses the line to pass when it is safe to do so, but the autonomous vehicle stubbornly refuses to bend the rules and waits until the obstruction is cleared.

That is not the only occasion human drivers ignore regulations. Australians, for example, habitually cruise in the outside lane of a quiet freeway even when signs indicate they should use the inside except when overtaking. And in the UK a headlight flash should officially only be used as a warning, whereas most Brits use the signal to indicate to another driver that they can pull out.

In their rush to market, autonomous vehicle makers are trying to solve the wrong problem. Adapting autonomous cars to a human driving environment is as difficult as it was to accommodate the first conventional cars on the streets of New York at the turn of the 19th century. Then, the few horseless carriages on the road had to thread their way between the city’s 100,000 horses—and several million kilograms of daily-deposited horse manure—averaging a speed little more than walking pace.

But by the 1920s, when Ford Model T made motoring affordable and practical, New York’s transport infrastructure had been completely redesigned around the needs of car drivers—with pedestrians, cyclists and horses coming a very distant second. Elsewhere, 1920s Los Angeles’ design was pretty much dictated by cars. Los Angeles’ low population density and far-flung suburbs were created because of the ease with which people could move around in cars during a decade of rapid expansion from 1910.

Such radical approaches are what is needed to introduce autonomous vehicles safely. For example, keeping human-controlled autos and self-drive cars apart would eliminate many of the situations where the autonomous car’s computer could struggle to make the right decision. Similarly, keeping pedestrians and cyclists—and those pesky horses—away from the autonomous cars would eliminate the need for many thousands of lines of code dedicated to avoiding accidents.

In truth, lessons of history are likely to be ignored because of the economic imperative, and we will spend several decades transitioning from conventional vehicles to autonomous cars by adapting current road systems to suit. But one day, when everyone has gotten used to the idea of climbing into a car and sitting back to relax, the system will be set up to perfectly cater for an autonomous-only car fleet allied to a business model forecast by William Clay Ford Jr, executive chairman of Ford Motor Company. Ford Jr recognised, as far back as 2000, that the future for his firm would be one where it owned vehicles and made them available to motorists solely when they needed to get somewhere.

Until then, autonomous vehicle software engineers face an uphill struggle and, sadly, the cars they design will be involved in accidents.