When the use of plastic began in the last century, it was seen as a way to protect and preserve goods. Its insulating property, durability, and ability to take different shapes made it quite popular for daily use. But now the world is facing the repercussions of its boom. According to a recent United Nations Environment Programme report, around 400 million tonnes of single-use plastic waste is produced annually all over the world. It is certain that recycling plastic waste is creating more jobs, yet currently, only about nine per cent of the plastic is recycled worldwide. Despite efforts to ban single-use plastic, we can’t turn a blind eye to the numerous proofs of its hazards to the environment. The waste is littering our cities and oceans, choking our animals to death, and harming our health.

Located in Chennai, an IIT-M incubated clean tech startup Samudhyoga Waste Chakra has come up with a way to put even non-recyclable plastic waste to good use. The company specialises in the manufacturing of decentralised plastic pyrolysis machines. These machines are capable of turning plastic waste into low-density fuel oil that fulfills commercial standards in a sustainable and economically viable manner. The units have solar panels for alternative power supply for further reducing pollution.

In pyrolysis, long chains of molecules in plastic polymers that contain units of carbon and other atoms are broken down into smaller units in the absence of air. The resulting products from this thermochemical treatment are carbon black, gases, and fuel oil. The temperature needs to be greater than 350 degrees Celsius, and the process takes between sixty and ninety minutes to complete. Although plastics of any size can be accepted for processing, a minimum of 1kg weight is necessary. Plastics that can be converted to oil include low-density polyethylene (LDPE), high-density polyethylene (HDPE), polyvinyl chloride (PVC) ranging from one to five per cent, polypropylene, and polyethylene terephthalate (PET) ranging from ten to twenty per cent.

Usually, plastic waste management systems incur large logistics costs and have huge space requirements. In addition, consistent unavailability of raw material can make optimation of such systems difficult. These machines are small, mobile, user-friendly, and can work whenever required. Decentralised approach minimises the additional burden of waste collection, segregation, and disposal, which makes these units suitable for residential and industrial needs in urban, semi-urban as well as rural areas. On winning the Zero Carbon Challenge 2018, the startup had received a funding of 1.5 million rupees for the initial setup. 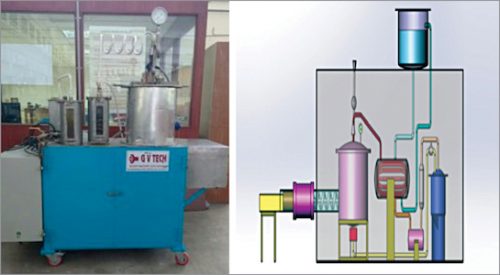 The fuel oil generated can replace pollution-causing conventional diesel fuel used to power furnaces, industrial boilers, diesel engines, generators, and even agricultural pumps. The company aims to improve the yield of fuel via suitable catalysts. The ultimate goal is to reduce landfilling and carbon emission through sustainable waste management of solid wastes and wastewater. Large-scale adoption of such systems can help in meeting the targets of Swachh Bharat Abhiyan and efficiently addressing our country’s waste disposal problems.