To make the industrial robots faster and more precise, Renesas Electronics Corporation has released the RZ/T2M motor control microprocessor units (MPUs) for applications such as AC servo drives and industrial robots. The MPU is said to be the company’s highest performance motor driver which packs highly precise real-time motor control capabilities and the latest industrial Ethernet on a single chip. The TA/T2M is powered by dual 800 MHz ARM Cortex R52 cores. 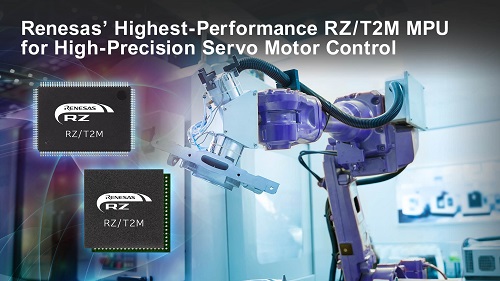 Globalisation and the need for a better lifestyle have led to the growth of demand for goods, and to meet the ever-increasing demand, companies are moving towards factory automation and have started employing robots to increase production. Industrial robots need to work continuously for an extremely long time and one of the main components which make the robot move are servo motors. The servo motors used in the industrial robots need to be fast and precise, and the speed and accuracy of the movement relies on the microprocessor controlling the motor.

“There is growing demand for factory automation and the deployment of industrial robots to boost productivity,” said Toshihide Tsuboi, Vice President of Industrial Automation Business Division at Renesas. “The RZ/T2M is capable of controlling the servo motors that drive robots at extremely high speed and with high precision. I anticipate that it will contribute to the development and widespread adoption of sophisticated industrial robots that can work safely alongside humans.”

According to the company, the RZ/T2M deliver rapid and highly precise control due to its large memory capacity of 576 kb which is tightly coupled with the CPU, this results in achieving low fluctuation in execution time and fast-response processing. These advantages enable the RZ/T2M to deliver rapid and highly precise control for applications that require high performance such as AC servos, inverters, and industrial robots.

The microprocessor supports multiple industrial Ethernet protocols such as EtherCAT, PROFINET RT, and EtherNet/IP. Moreover, the MPU also includes an Ethernet switch that supports the next-generation Time-Sensitive Networking (TSN) standard, allowing multiple devices to operate in precise synchronization. The RZ/T2M has a hardware configuration designed with functional safety operation in mind, so only one external MCU is needed to implement functional safety.

“Functional safety continues to be an important requirement for many of our customers,” said Anders Holmberg, CTO at IAR Systems. “Companies choosing the new Renesas’ RZ/T2M in their next design can be sure that IAR Systems will support them with certified development tools and professional technical support globally, substantially reducing both design time and project cost.”