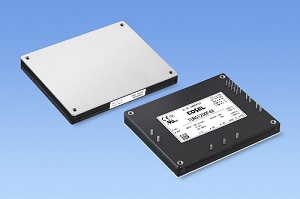 COSEL has extended its TUNS series by adding the 1.2 kW, compact and low profile, onboard AC-DC power module, the TUNS1200 that has an input voltage range of 85VAC to 305VAC. With a design optimised for conduction cooling, the TUNS1200 is suitable for applications requiring a silent power solution such as in a surgery room. Equally, it is suitable for industrial applications when forced air ventilation is impossible due to environmental constraints.

In applications where more power is required and physical height is an issue, TUNS1200 modules can be connected in parallel up to nine units (up to 9,750W), their output voltage can be adjusted down to zero volts and easily set to constant voltage or constant current operating modes. When connected in parallel and utilising the Current Balance (CB) pin, the active current sharing ensures that each module delivers the correct amount of current to the load.

Optimised for conduction cooling, the units can be operated from -40 degrees Celsius to +100 degrees Celsius baseplate temperatures, with full power operation up to +85 degrees Celsius, 20 – 95%RH (Non condensing). Depending on cooling and assembly method, a power derating may apply.

TUNS1200 power supplies have an input voltage range of 85VAC to 305VAC single phase and conform to the safety standards input voltage range of 100-277 VAC (50/60Hz). For applications such as battery chargers requiring constant current (CC), the TUNS1200 includes a dedicated pin (ITRM) and by applying a DC voltage or connecting a resistor to the –S terminal it is possible to set the constant current from just above zero to the desired current.

The TUNS1200 complies with several safety agency approvals and complies with the RoHS directive and is CE marked as per Low Voltage Directive.