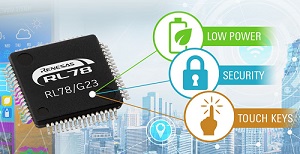 Further strengthening its RL78 Family of 8-bit and 16-bit MCUs for a broad range of applications, Renesas Electronics Corporation has launched a 16-bit general-purpose RL78/G23 microcontroller (MCU) that has increased on-chip flash memory capacity to 768 KB and wide on-chip peripheral functions, which extend functionality while reducing the bill of materials (BOM) cost and improving power consumption. With this feature combination, the new RL78/G23 is well suited for a wide range of applications that require both power and cost efficiency, including IoT endpoint devices such as home electronics, remote controls and sensors.

The RL78/G23 realizes 44µA/MHz at CPU operation and 210nA during STOP (with 4KB of SRAM retention), an even lower power consumption compared to current RL78 MCUs. Also, the newly implemented SNOOZE mode sequencer (SMS) makes it unnecessary to activate the CPU while any peripheral operations are operating in snooze mode, dramatically reducing power consumption for applications that utilize intermittent operation. Furthermore, the logic and event link controller (ELCL) adds logic functionality to the capabilities of a conventional event link controller (ELC), making it possible to create conditional links to multiple events while continuing to benefit from the reduced power consumption realized by the ELC.

The RL78/G23 features a capacitive touch sensor unit that combines superior high-sensitivity and low-noise characteristics and can be used to implement a contactless gesture-based user interface (UI). The MCU also incorporates enhanced security functions that make it possible to develop truly secure systems. These include a true random number generator (TRNG) essential for certificate encryption as well as a device-specific unique ID and a customer ID that can be specified by the user.

An evaluation board (the Fast Prototyping Board) is now available for the RL78/G23 that features all-pin access as well as Arduino UNO and Grove interfaces. Simply connect a USB cable to enable program writing and debugging, enabling developers to start evaluation of the RL78/G23 without the need for additional tools.

The RL78/G23 is in mass production and available now in a 64-pin LFQFP package, 128 KB of on-chip memory configuration.